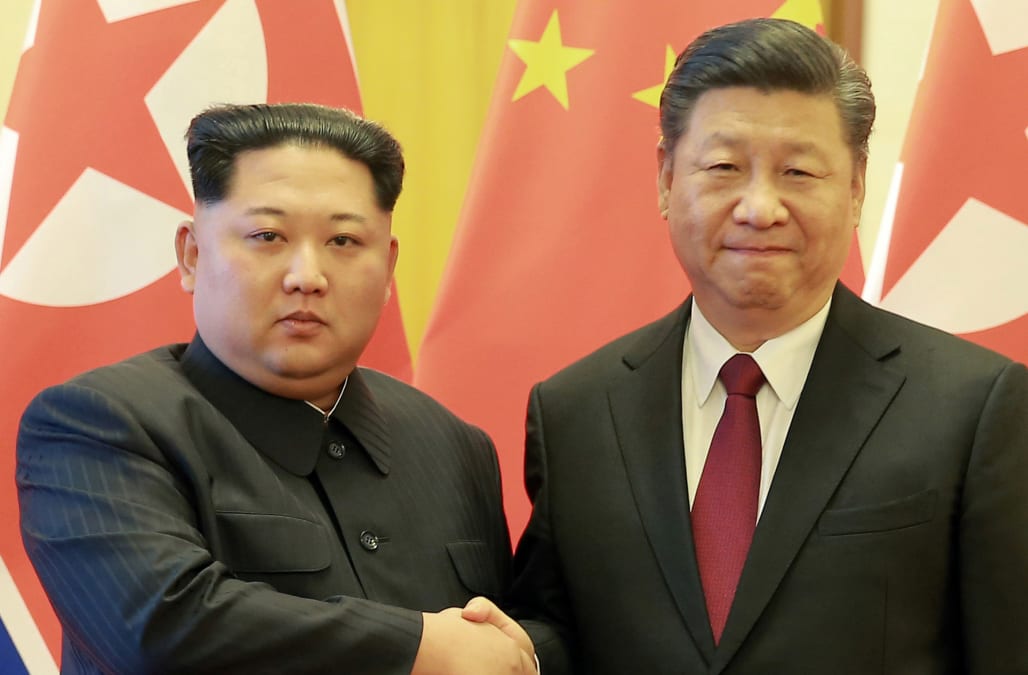 When Kim Jong Un met Chinese President Xi Jinping in Beijing, two weeks after agreeing to meet President Donald Trump, he came out of the shadows to make history.

Since Trump took office, Kim has overseen a series of North Korean firsts. North Korea tested its first thermonuclear device, its first intercontinental ballistic missile, and has now conducted its first ever leader-to-leader act of diplomacy.

But Trump has also offered up a first — the first credible threat of military force against Pyongyang.

Throughout his first year as president, Trump made a series of military overtures and outright threats to North Korea that undeniably put the region on edge.

As a deeply unconventional and unpredictable US president, North Korea must have felt some of the heat too, as they reached out to Republican strategists and eagerly analyzed Trump's tweets and statements to make some kind of sense of them.

But as the fear grew, so did international cooperation. Trump's "maximum pressure" strategy against North Korea has brought unprecedented cooperation from China and Russia, Pyongyang's major backers, and two parties that desire stability in the Korean Peninsula.

Now Kim, motivated by crippling sanctions with his nuclear weapons program at a comfortable resting point, has changed his tone.

Kim is in the process of setting up talks with South Korean President Moon Jae In and Trump, but before then China wanted to get a word in.

Experts tell Business Insider that China is anxious over the prospect of talks progressing without them, possibly at the cost of their national security interests.

Historically, China does not like North Korea under Kim's leadership. Kim has killed members of his own family over their ties to China.

Kim has been in power for seven years without heading to Beijing, and only now that talks, or confrontation, with Trump looms, did he appear to hastily make that move.

Now China, Japan, South Korea, and even Russia, seek to get in Kim's ear ahead of his meeting with Trump.

Will Trump soften up once he talks to Kim? Maybe, maybe not

The prospect of dialogue has done nothing to make Trump's threat of military action less credible. In fact, by dismissing an already hawkish National Security Adviser in H.R. McMaster and replacing him with the ultra-hawkish John Bolton, who frequently discusses the need for striking North Korea, Trump may have only grown more credible.

Trump responded on Twitter to the news of Kim and Xi's meeting, saying there was a "good chance" for peace, but also promising to keep up pressure on North Korea "at all cost."

As Bolton has repeatedly suggested that, if talks between Kim and Trump are anything less than Kim discussing how and when he'll dismantle his nuclear weapons, the US would simply walk out.

With the State Department understaffed to the point of near hollowness, Trump appears to have little to lean on besides his credibility in initiating war.

As long as Trump's threat remains credible, he'll retain leverage in talks and in building international support for further sanctions on North Korea.

If the talks do fail catastrophically to create any road to peace between the US and North Korea, Trump can then ponder military action against Pyongyang, knowing that in the eyes of the world he's come closer to a North Korean leader than any other president in history.

NOW WATCH: Why Russia is so involved in the Syrian Civil War

SEE ALSO: What Kim Jong Un talked about with Xi Jinping in China