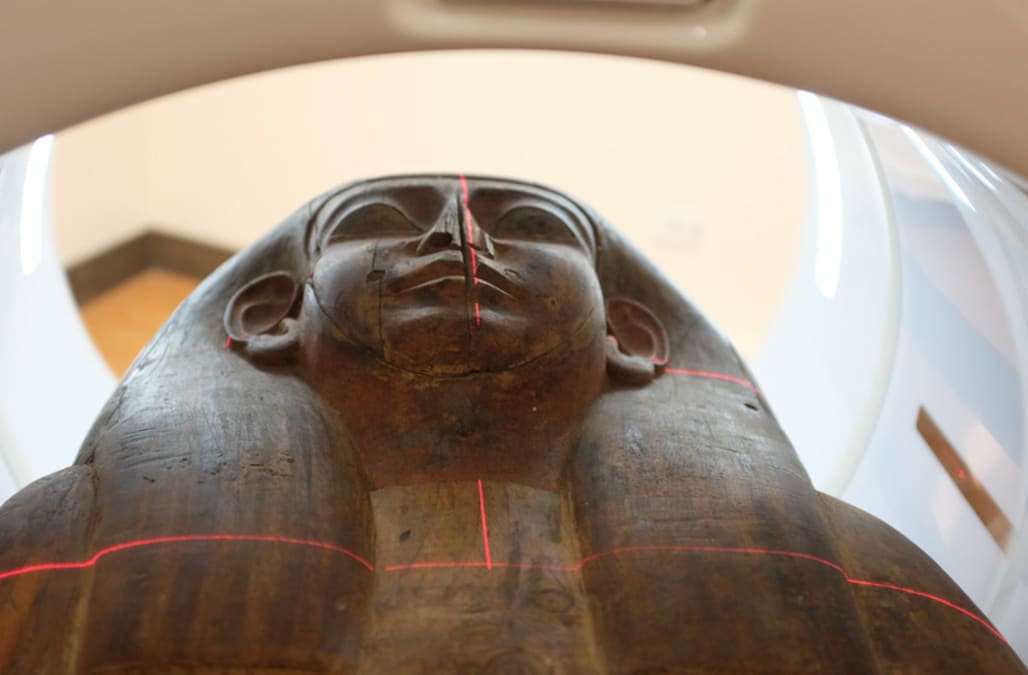 Since it was bought 160 years ago, University of Sydney archaeologists didn't think there was much to a particular sarcophagus in its collection.

The coffin of one Mer-Neith-it-es sat in the Nicholson Museum, listed as empty in a 1948 handbook, while the museum database said it contained "mixed debris."

Dating circa 664-525 BCE, it had been purchased by an early founder of the university, Sir Charles Nicholson, as part of 408 Egyptian objects that would form a basis for a collection.

It all changed last June, when researchers needed to take a photo of the previously undocumented hieroglyphics under the coffin. That's where they discovered the remains of human feet and bones.

"It was an amazing moment of discovery," the Nicholson Museum's senior curator, Jamie Fraser, said.

Mixed remains within the coffin.

The discovery led to researchers embarking on a project to document all the mummies in the Nicholson Museum. Fraser said they had never been dealt with before because of how difficult and sensitive one needs to be when dealing with human remains.

"Everything we do has to be respectful to that individual inside. To go through all these mixed jumble of remains is a hugely intricate, delicate job," he added.

As an old archaeological paradox goes, an excavation is at once an act of conservation and destruction. The materials would never be the same as it was found. Now, thanks to technology, researchers can capture high-resolution images of the mummy and its coffin before excavation.

"Previously, the technology hasn't been there so curators have put it to one side to be dealt with later," Fraser said. "If we had done this project 10 years ago, we wouldn't have been able to do it. Now is the moment that we can actually address this."

Last September, it worked with 3D scanning company WYSIWYG to create a digital model of Mer-Neith-it-es' coffin, with all its contents intact.

"Researchers in 50, 100 years time will be able to use that and zoom right in to explore what's going on, to a tenth of a millimetre ... we're really super pleased with it," he said.

Then in December, CT scanners were used to capture thousands of images of Mer-Neith-it-es' coffin and her remains, as well as other mummies in its collection: Horus, Meruah and Padiashiakhet.

As researchers expected, the remains of Mer-Neith-it-es were mixed, but they did find ankles, feet and toes that belonged to one person at least 30 years of age.

The CT scanning not only helps with documenting the mummies in great detail, but also aids archeologists in guiding its excavation.

Fraser said he's only aware of an unexpected discovery like this at Switzerland's Burgdorf Museum back in 2013.

That's because mummies fall into two categories: Ones that are discovered by archaeologists are kept intact, as there is no good reason to remove its contents. Others purchased at antiquities markets are often in bad condition. Mer-Neith-it-es falls in the later category.

CT scan of Mer-Neith-it-es revealing the contents of her coffin.

The next step, is for these four mummies to be included a purpose-built Mummy Room in the forthcoming Chau Chak Wing Museum. It's where Fraser and his team's work in the past six months will come together.

"In this one room, we'll really focus on these four ancient individuals we have ... and we'll discuss what it was like for these people in the ancient world," he said.

"It'll be a great opportunity to integrate all this scientific research we've done, like the CT animations and 3D models, and show them alongside the mummies."