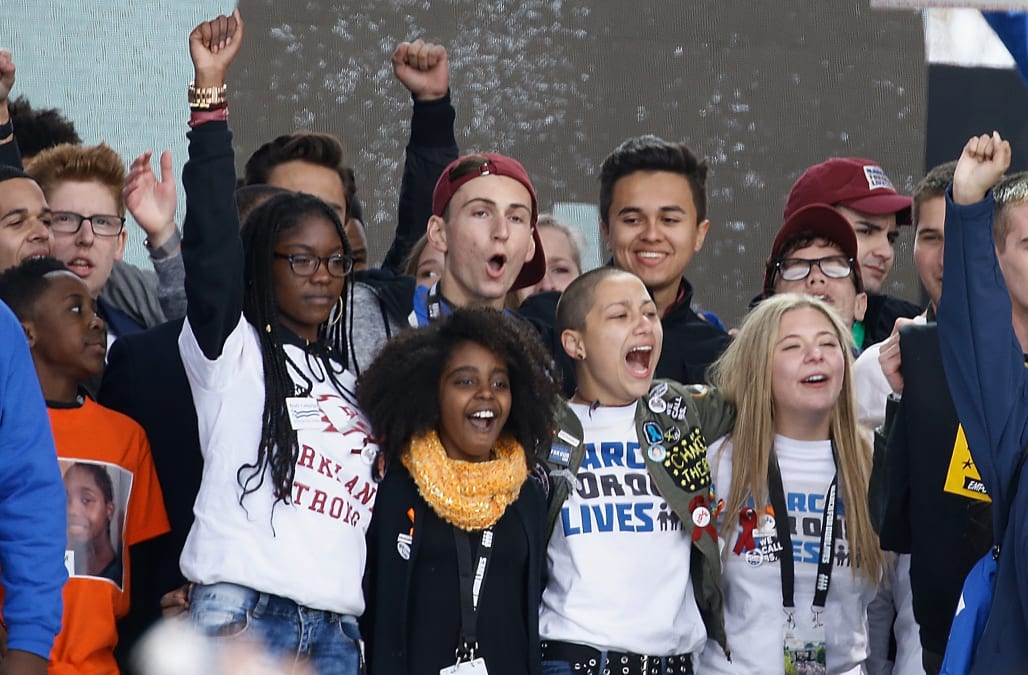 A group of Parkland shooting survivors led the charge in organizing Saturday's "March for Our Lives" in Washington — an event emulated in hundreds of cities and towns across the country and around the globe.

They were joined on stage by many others who've been touched by gun violence, including young people of color whose communities have been disproportionately impacted.

In the weeks since the massacre at Majory Stoneman Douglas High School in Florida, some of the young activists have become targets for right-wing conspiracy theories and viciously attacked online by those, including sitting lawmakers, who disagree with their positions on gun regulation.

Meet some of the young people leading the movement against gun violence: ​

Emma González, 18, "Fight for your lives before it's someone else's job"

Emma González, an 18-year-old senior at Marjory Stoneman Douglas, has become one of the most prominent faces of the student-led movement.

After the Valentine's Day massacre, González and other student survivors began working to contact politicians, advocate for legislative change, and organize the march on Washington.

"The people in the government who are voted into power are lying to us," González said on Saturday before leading several minutes of silence. "And us kids seem to be the only ones who notice and are prepared to call B.S."

Jaclyn Corin, the 17-year-old junior-class president at Marjory Stoneman Douglas, has said that her way of coping with the tragedy is to distract herself "with work and helping people."

On Saturday, she affirmed the Parkland students' commitment to shedding light on the daily gun violence that disproportionately affects communities of color, but doesn't receive as much attention as mass shootings.

"We recognize that Parkland received more attention because of its affluence," Corin said during her speech in Washington. "But we share this stage today and forever with those communities who have always stared down the barrel of a gun."

After the president tweeted on Monday that despite all the "fake news, "our country is doing great!" Corin responded, "96 deaths by firearm every day is not what I call great."

David Hogg, 17, "First-time voters show up 18% of the time in midterm elections. Not anymore."

David Hogg, a 17-year-old student at Marjory Stoneman Douglas, has also become a national face of the anti-gun violence movement. Hogg has given multiple national media interviews and spoken at several events in the wake of the shooting.

On Saturday, Hogg encouraged the crowd to take action and vote.

"We're going to make sure the best people get in our elections to run not as politicians, but as Americans. Because this — this — is not cutting it," he said.

Some of President Donald Trump's most fervent supporters, gun rights activists, and alt-right bots have attacked Hogg, along with other Parkland survivors, online. High profile members of the conservative media, who disagaree with Hogg's support for gun control, have called him an "extremist" and a "useful idiot."

Naomi Wadler, 11, "People have said that I am some tool of some nameless adult. It’s not true."

Naomi Wadler, 11, was the youngest speaker at Saturday's march in Washington and provoked an enormous reaction from the crowd, celebrities, and politicians.

The fifth-grader from Virginia, who led a walkout at her school, said she was at the march to "represent the African-American girls whose stories don't make the front page of every national newspaper."

"I represent the African-American women who are victims of gun violence, who are simply statistics instead of vibrant, beautiful girls full of potential," Wadler said, adding that she'll be a voter in "seven short years."

"My friends and I might still be 11 and we might still be in elementary school, but we know. We know life isn't equal for everyone and we know what is right and wrong," she said to thunderous applause.

Cameron Kasky, 17, "Welcome to the revolution."

Cameron Kasky, a theater kid at Majory Stoneman Douglas, began speaking out shortly after the shooting, which he and his brother, who has special needs, both survived.

"Can't sleep," Kasky wrote in a Facebook post. "Thinking about so many things. So angry that I'm not scared or nervous anymore ... I'm just angry."

Kasky began speaking with national media and joined the group of Douglas students leading the public response to the shooting.

"Welcome to the revolution," Kasky said to cheers on Saturday.

Edna Chavez, a 17-year-old from South Los Angeles, spoke at the rally on Saturday about her brother, Ricardo, who was a high schooler when he was shot and killed.

Chavez said the kind of gun violence that took her brother's life is so "normal" in her neighborhood that she "learned to duck from bullets before I learned how to read."

"Ricardo was his name," Chavez said. "I lost more than my brother that day. I lost my hero."

SEE ALSO: 'ENOUGH IS ENOUGH': Hundreds of thousands descend on Washington and across the US for the 'March for Our Lives' rally against gun violence