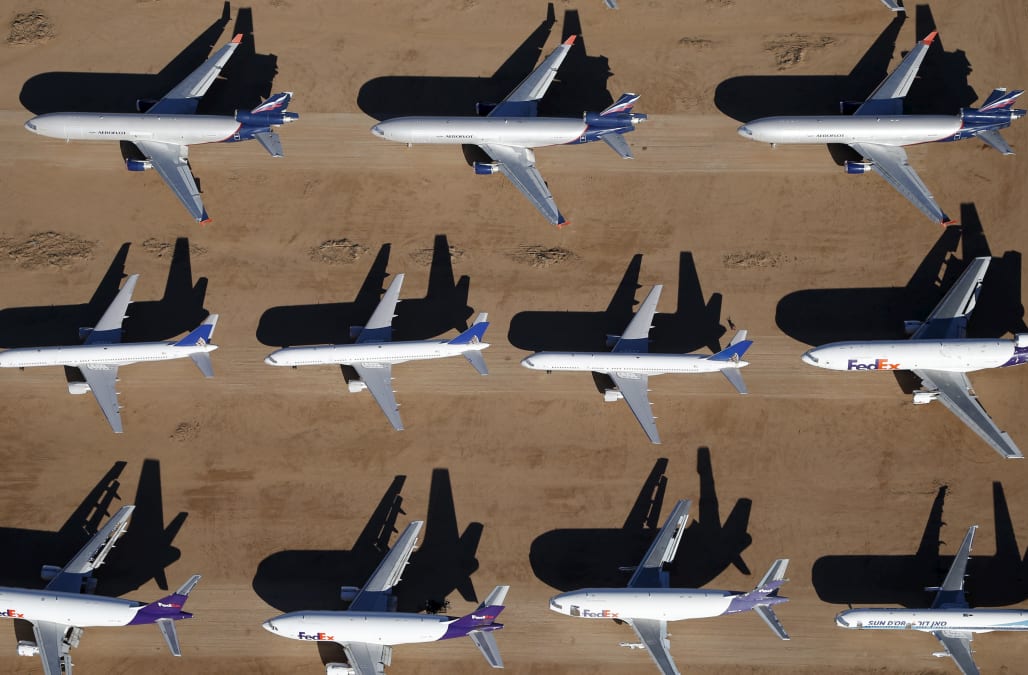 The Boeing 747 is disappearing from the skies over the US. With the retirement of Delta's fleet of jumbo jets in December, there are no 747s left in passenger with any of America's major airlines.

And there's no better reminder of this than a photo posted on Twitter by Royal S King showing the skeletal remains of a Delta Air Lines 747 as it is being scrapped at an airplane junkyard in Marana, Arizona.

It's a jarring visual that shows the fate that befalls most of these majestic beasts.

In 2017, both Delta and United Airlines hosted farewell tours for their venerable jumbo jets with United's fleet entering retirement a few before Delta's.

You see some crazy ish out in the desert #Marana#AvGeek#boeing747 😨😨😨 pic.twitter.com/auZ4zfY7zf

Shortly thereafter, the planes are sent to salvage yards for storage. The warm arid climate of these desert facilities minimize corrosion and keep the planes in acceptable condition should the airline find a buyer or need to aircraft to re-enter service. However, few people these days are in the market for 20-year jumbo jets, so Delta and United's planes will likely be scrapped.

Its expensive engines, electronics, and other salvageable parts will be sold off for parts. The remaining aluminum airframe will be cut up and sold as scrap metal.

The demise of the Boeing 747 as a mainstay of international air travel has been a long time coming. Over the past 10 years, Boeing has sold an average of just eight 747s per year with the vast majority of those being freighters. United AirlinesOver the past 25 years, regulations limiting the use of twin-engined jets on international long-haul flights have become significantly less strict. As a result, airlines have replaced the larger, less efficient three or four-engined jets that dominated air travel during the 1970s and 80s with smaller twinjets. Aircraft like the Boeing 777 and the 787 Dreamliner or the Airbus A330 and A350 have taken the jumbo jets place as the workhorse for international airlines.

As a result, it's the end of the road for a plane we call the Queen of the Skies.

15 crazy requests people have made on airplanes

'How you roll down the window?'

As much as we might like them to, cars do not fly. And yet some people seem convinced that cars and metal contraptions flying 35,000 feet in the air function exactly the same way. Many a flight attendant has had to break the news to a passenger that plane windows can not be opened. Doing so would send the temperature inside the plane plummeting to frostbite inducing-levels, endangering everyone on board. Why the passengers want the window open in the first place is a mystery to us—it's already cold enough on airplanes. (Here's the reason airplanes tend to be so chilly.)

'I forgot something. Can you turn the plane around?'

Yes, it's incredibly frustrating to forget an item at home, especially when you're embarking on a long trip. But considering that you're not the only one on the plane, the fact that you left your sunscreen at home is not reason enough for the entire plane to make an emergency landing. These are the craziest reasons flights have been delayed.

'Can you fly the plane lower? My wife is scared of heights.'

Sure, it's no fun to be on a plane when heights make you nervous. But, considering that planes need to fly at a certain height to minimize air resistance and drag, the pilot probably won't be sympathetic enough to oblige if you ask this question. And besides, how much less nerve-racking can the plane flying at 20,000 feet, rather than 35,000 feet, possibly be, anyway? Here are some tips that can help you combat your fear of flying.

'Can you fly the plane lower? These clouds are blocking the Grand Canyon.'

Unfortunately, a commercial flight is not a sightseeing tour. If you want to see the Grand Canyon, you'll have to book a flight to Arizona where you can see it up close.

'Can you avoid flying too close to Windsor Castle? I'm worried it may annoy the Queen.'

According to cabincrew.com, one passenger flying into Heathrow was so concerned about the Queen's well-being that he alerted his flight crew. Heathrow is very close to Windsor Castle, and this royal-conscious flier wanted to take a detour to spare the Queen the noise pollution. Here's what it's like to fly like a member of the Royal Family.

One passenger seemed to think that this would reduce his or her seasickness during takeoff. The request was not granted. These airports have the scariest takeoffs and landings in the world.

Hate to break it to you, customer, but the person you're sitting next to is probably a stranger to the flight attendant, too. If you want to avoid strangers, airplanes are not the place to do that.

'Can I sit next to the pilot? It's my birthday.'

Many people might want to fly first class on their birthdays, sure. But even that wasn't enough for this passenger, who wanted to be right in the middle of the action in the cockpit. These are the secrets airline pilots won't tell you.

'Can I use the rubber slide to get off the plane?'

Sure, maybe the safety manuals make the giant inflatable slide look like fun. But considering that the slide is only activated in the case of an emergency evacuation, passengers should probably stick to being grateful if they don't have to use it to get off the plane. These are the things flight attendants wish they could tell you.

'Can I bring one of the world's best poker players with me?'

Another JetSmarter customer was determined to practice for the poker competition he was flying out to Las Vegas for. Via private jet, he flew an unnamed world-renowned poker player with him from Europe to Las Vegas and spent the entire flight practicing. Sadly, the JetSmarter spokesperson did not reveal if the customer won the competition.

According to a spokesperson for PrivateFly, not one but several of their customers request to celebrate New Years' Eve twice, on two different continents. They want to ring in the new year in Sydney, Australia and Los Angeles, California, two cities separated by a 19-hour time difference. The company grants this request by flying these eager customers from Sydney on a super-speedy Gulfstream G650, so that they can make it to Los Angeles in time for the countdown.

One JetSmarter client specifically insists on only hearing the sounds of Liberace every time he or she flies. Another rich family asks to have music from "Mamma Mia!" play right before takeoff every time they fly, according to Magnus Aviation. And one celebrity couple actually requested for an opera singer to join them on a flight and sing to them for an hour. We definitely don't think these requests abide by the airplane etiquette rules every plane passenger should follow.

'Where is the ATM onboard?'

We've heard of secret sleeping areas, hidden buttons that give you extra legroom, and even a McDonald's on planes, but sadly no ATMs. Here are some of the coolest airplane feature you had no idea existed.

'The engine noise is giving me a headache. Can you turn it off?'

This one might be the winner. According to cabincrew.com, one passenger asked his flight attendant what the "dull whirring sound" was, complaining of a headache. Even after the attendant told him that it was, in fact, the engine, the passenger requested that the attendant tell the captain to shut it off. When this request was denied, the passenger threatened to file a complaint saying that the airline's terms and conditions "did not state how loud the engines were during the flight." Oh well...flying isn't for everyone. Next, check out the craziest requests VIP hotel guests have ever made.

NOW WATCH: Goldman Sachs is telling its multimillionaire clients not to worry about valuations or inflation

SEE ALSO: America is saying goodbye to the Boeing 747 jumbo jet — here's a look at its glorious history