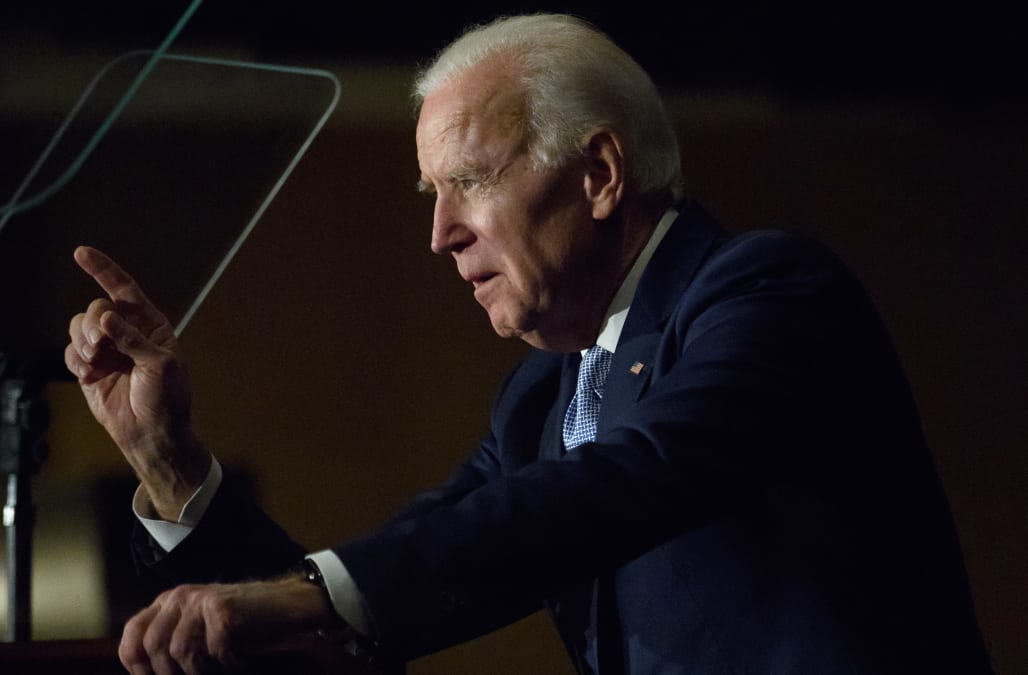 For about a year and a half, former Vice President Joe Biden and President Donald Trump have gone back and forth suggesting they would "beat the hell" out of each other.

The latest instance happened Wednesday when Biden, speaking at an anti-sexual assault rally at the University of Miami, said he would have "beat the hell" out of Trump if they went to school together.

Biden made the comment in reference to the "Access Hollywood" tape released prior to the 2016 presidential election, which showed Trump making a series of lewd and crude comments about women.

"A guy who ended up becoming our national leader said, 'I can grab a woman anywhere and she likes it,'" Biden said. "They asked me if I’d like to debate this gentleman, and I said 'no.' I said, 'If we were in high school, I’d take him behind the gym and beat the hell out of him.'"

"I've been in a lot of locker rooms my whole life," Biden continued. "I'm a pretty damn good athlete. Any guy that talked that way was usually the fattest, ugliest SOB in the room."

Biden, who is mulling a run for the presidency in 2020, began the back and forth late in the 2016 cycle, just after the tape was released.

"The press always ask me don't I wish I were debating him? No, I wish we were in high school I could take him behind the gym — that's what I wish," he said during an October 2016 rally.

'I would kick his ass. Boy, would be easy'

Trump was quick to respond, saying at one of his campaign rallies that he would "love" for Biden to try and fight him.

Trump later suggested that Biden would "fall over" with "just a little bit of a puff," proceeding to blow air from his lectern at a subsequent rally.

"You know what you do with Biden? You got like this and he'd fall over," Trump said at an Ohio campaign rally as he blew wind into the air. "Just a little bit of a puff and he's gone."

Earlier this month, Trump resurfaced the back-and-forth during a joke-filled speech to the Gridiron Club, a charitable journalistic organization, at its annual dinner.

He made reference to "Sleepy Joe" and suggested that he would "kick his ass."

"There's talk about Joe Biden, Sleepy Joe, getting into the race," Trump said, noting that Biden may very well end up being his 2020 opponent. "You know what he said, 'I want to take him behind the barn.' ... Just trust me, I would kick his ass. Boy, would be easy. Oh, would be easy."

SEE ALSO: John Kelly was 'extraordinarily dismissive' of Hope Hicks and dubbed her 'the high-schooler'