A compound in beets could slow Alzheimer's effects 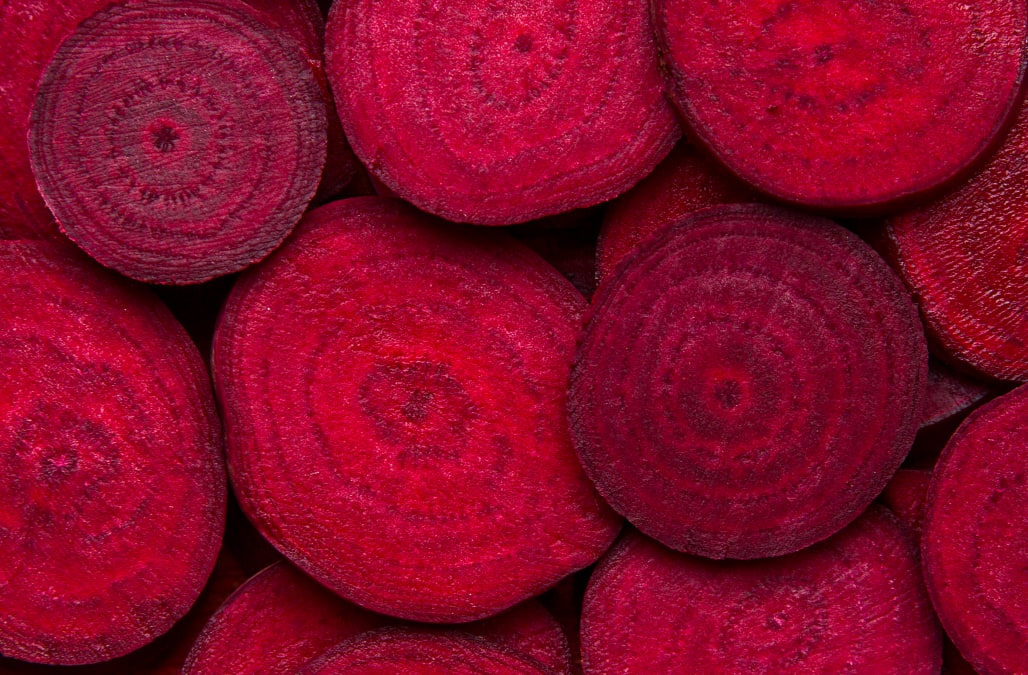 Betanin, the compound that gives beets their distinctive red color could slow down the effects of Alzheimer's disease — the world's leading type of dementia.

Misfolded protein accumulation in the brain — one of the processes associated with Alzheimer's diseases — could be slowed with the help of the vegetable and lead to the development of a drug aimed at alleviating some of the illness' long-term, debilitating effects, according to a new study.

The compound "shows some promise as an inhibitor of certain chemical reactions in the brain that are involved in the progression of Alzheimer's disease," co-author Li-June Ming said in the study published by the American Chemical Society. "This is just a first step, but we hope that our findings will encourage other scientists to look for structures similar to betanin that could be used to synthesize drugs that could make life a bit easier for those who suffer from this disease."

8 unexpected ways to decrease your risk of Alzheimer’s

Pay attention to the food you eat.

The right diet can contribute to lowering your risk of cognitive decline — in particular a diet called the MIND diet, short for "Mediterranean-DASH Intervention for Neurodegenerative Delay"

It's a hybrid version of the Mediterranean and DASH diets, focusing on the aspects of those diets that have to do with the brain. Berries, olive oil, nuts, and dark, leafy greens are staples of the diet, which was designed based on large-scale studies of cognitive decline and ranked third on US News and World Report's annual best diet list.

Plus, it fits in with what Dr. Maria Carrillo, chief scientific officer of the Alzheimer's Association told Business Insider in July 2016: "Have fun, eat healthy meals that are good for you, and you may end up helping your brain as well as your heart."

According to a new report in the journal Lancet, losing your hearing can increase your risk of Alzheimer's. While the reason for this isn't entirely clear, the researchers suggested it could have to do with the social isolation that comes from losing your hearing and how that affects the brain when it's not able to work at processing sound.

Exercise can have additional health benefits as well, adding to the idea that what's good for your heart and body may also be good for your brain.

Decrease your stress levels where possible.

There is evidence to suggest a link between stress and an increased risk of Alzheimer's and cognitive decline.

A small 2009 study found that of the 41 participants with mild cognitive impairment, those who had higher stress ratings also had faster rates of cognitive decline.

The good news is that there are plenty of steps you can take to manage stress, such as breathing exercises, meditation and yoga.

Too little sleep can do a whole host of things to your body and brain.

A 2014 review of observational studies found that poor sleep is a risk factor for cognitive decline and Alzheimer's. Though the researcher said there needs to be more research into the exact mechanisms of why that is, they concluded that "healthy sleep appears to play an important role in maintaining brain health with age, and may play a key role in [Alzheimer's disease] prevention."

According to the World Health Organization, smoking is associated with an increased risk of dementia and Alzheimer's. Researchers think this has to do with the vessels that carry blood around our body and to our brains, which are also linked to things like stroke and heart disease.

Staying social can be a great way to lower your risk of cognitive decline and Alzheimer's. According to the National Institute on Aging, staying cognitively active, either with intellectual stimulation or staying socially engaged, is linked with a decreased risk of Alzheimer's.

That social component is something Neurotrack is working hard to address, said Kaplan. The company has plans to build an internal social network. Since the assessment launched in December 2016, she said she'd seen thousands join a private Facebook group to chat about their results. Kaplan said there's even one group in New Zealand that has started meeting up for coffee after they took the assessment.

Along the lines of social engagement, staying stimulated intellectually has also been associated with a decreased risk of Alzheimer's. That kind of stimulation can be anything from reading to crossword puzzles or attending lectures and playing memory-based games, according to the National Institute on Aging.

Alzheimer's affects one in 10 Americans over the age of 65 and one in three over 85 — more than five million people. The cause of the disease is still mostly unknown, but scientists suspect that a big contributor is beta-amyloid — a peptide that builds up in the brain and disrupts neuron communication, eventually killing them off. When beta-amyloids attach themselves to metals in the brain like copper or iron, they oxidize, misfold and accumulate.

In the study, the researchers saw that introducing betanin reduced oxidation by 90% and, in effect, at least partly suppressed misfolding.

"We can't say that betanin stops the misfolding completely, but we can say that it reduces oxidation," co-author Darrell Cole Cerrato said. "Less oxidation could prevent misfolding to a certain degree, perhaps even to the point that it slows the aggregation of beta-amyloid peptides, which is believed to be the ultimate cause of Alzheimer's."