Senator Bob Corker expects Trump to pull out of Iran deal in May: report 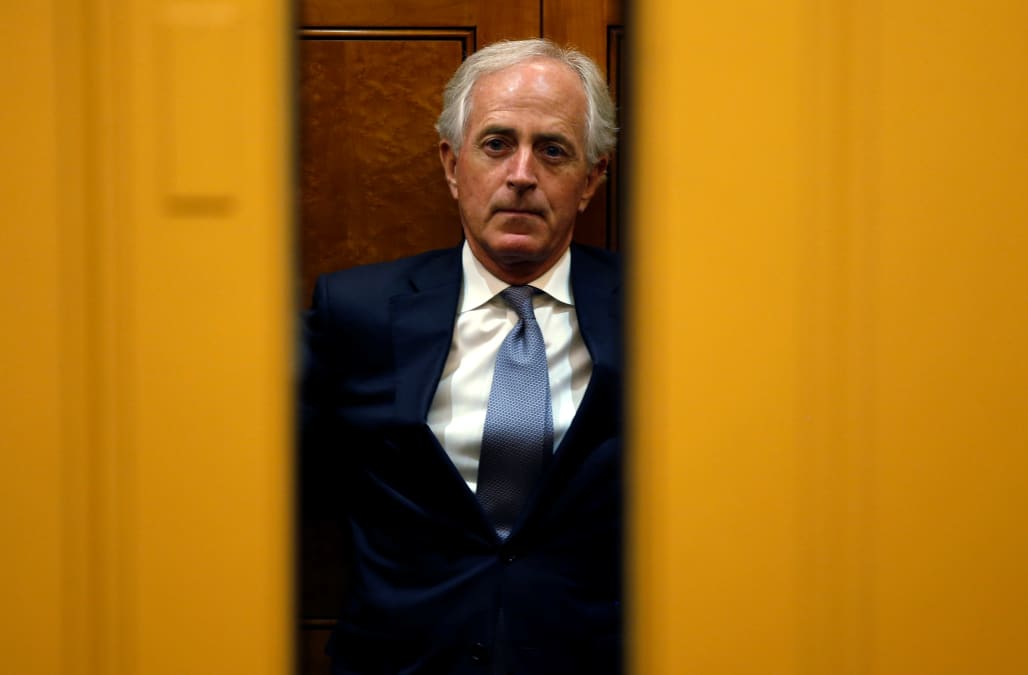 "The Iran deal will be another issue that's coming up in May, and right now it doesn't feel like it's gonna be extended," Corker told CBS' "Face the Nation" in an interview broadcast Sunday.

"I think the president likely will move away from it unless my, our European counterparts really come together on a framework. And it doesn't feel to me that they are," he said.

Britain, France and Germany have proposed fresh EU sanctions on Iran over its ballistic missiles program and its role in Syria's war in a bid to persuade Washington to preserve the 2015 nuclear deal with Tehran, according to a confidential document seen by Reuters.

The proposal is part of an EU strategy to save the accord signed by world powers that curbs Tehran's ability to develop nuclear weapons, namely by showing U.S. President Donald Trump there are other ways to counter Iranian power abroad.

Trump delivered an ultimatum to the European signatories on Jan. 12. It said they must agree to "fix the terrible flaws of the Iran nuclear deal," which was agreed under his predecessor Barack Obama, or he would refuse to extend U.S. sanctions relief on Iran. U.S. sanctions will resume unless Trump issues fresh "waivers" to suspend them on May 12.

Asked if he believed Trump would pull out on May 12, the deadline for the president to issue a new waiver to suspend Iran sanctions as part of the deal, Corker responded, "I do. I do."

More on Corker and Trump's past tussles:

Trump vs. Corker: The Twitter battle
Republican U.S. presidential candidate Donald Trump greets Senator Bob Corker (R-TN) at a campaign rally in Raleigh, North Carolina, U.S., July 5, 2016. REUTERS/Joshua Roberts
It's a shame the White House has become an adult day care center. Someone obviously missed their shift this morning.
Bob Corker gave us the Iran Deal, & that's about it. We need HealthCare, we need Tax Cuts/Reform, we need people that can get the job done!
Senator Bob Corker "begged" me to endorse him for re-election in Tennessee. I said "NO" and he dropped out (said he could not win without...
...Hence, I would fully expect Corker to be a negative voice and stand in the way of our great agenda. Didn't have the guts to run!
..my endorsement). He also wanted to be Secretary of State, I said "NO THANKS." He is also largely responsible for the horrendous Iran Deal!
The Failing @nytimes set Liddle' Bob Corker up by recording his conversation. Was made to sound a fool, and that's what I am dealing with!
Republican U.S. presidential candidate Donald Trump listens as Senator Bob Corker (R-TN) speaks at a campaign rally in Raleigh, North Carolina, U.S., July 5, 2016. REUTERS/Joshua Roberts TPX IMAGES OF THE DAY
UNITED STATES - JULY 5: Republican Presidential candidate Donald Trump, left, and Sen. Bob Corker, R-Tenn., appear on stage during a rally at the Duke Energy Center in Raleigh, N.C., July 5, 2016. (Photo By Tom Williams/CQ Roll Call)
Bob Corker, who helped President O give us the bad Iran Deal & couldn't get elected dog catcher in Tennessee, is now fighting Tax Cuts....
...Corker dropped out of the race in Tennesse when I refused to endorse him, and now is only negative on anything Trump. Look at his record!
Isn't it sad that lightweight Senator Bob Corker, who couldn't get re-elected in the Great State of Tennessee, will now fight Tax Cuts plus!
Same untruths from an utterly untruthful president. #AlertTheDaycareStaff
Up Next