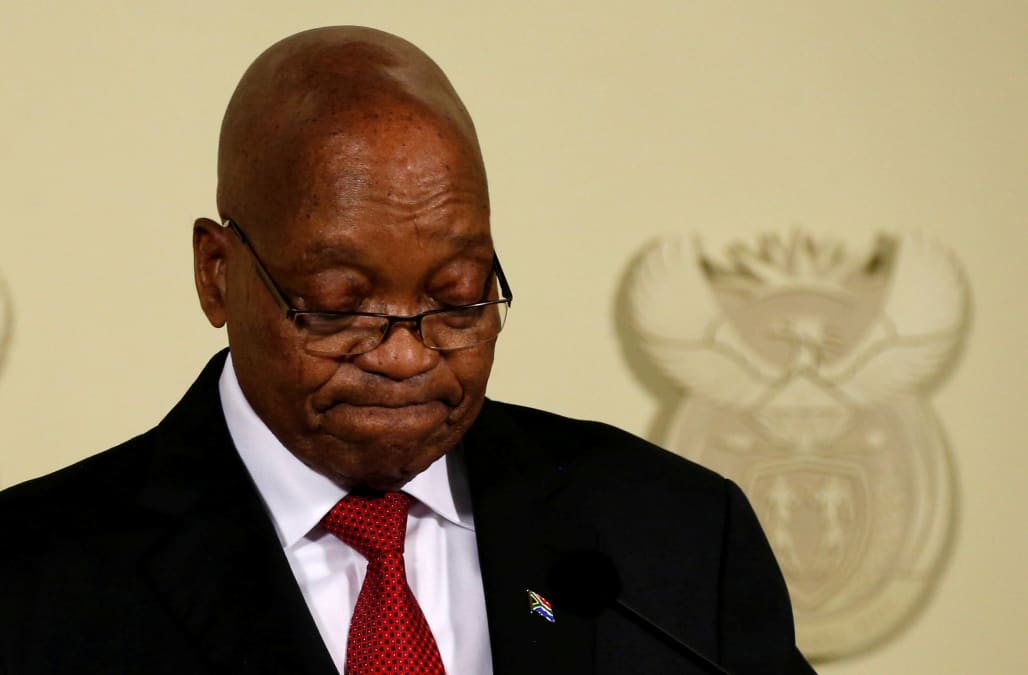 PRETORIA, March 16 (Reuters) - Former South African president Jacob Zuma is to face corruption charges over a $2.5 billion arms deal, prosecutors said, as a years-old scandal returned to haunt him within weeks of his fall from power.

It was a stunning judicial development on a continent where political "Big Men" rarely have to face their accusers in court.

Zuma, who was forced to resign by his ruling African National Congress (ANC) last month, was at the center of a 1990s deal to buy European military kit that has cast a shadow over politics in South Africa for years.

Chief state prosecutor Shaun Abrahams told a media conference on Friday that Zuma's attempts to head off the charges hanging over him for more than a decade had failed.

The 75-year-old denied all the allegations against him, Abrahams added.

RELATED: A look at Jacob Zuma

"After consideration of the matter, I am of the view that there are reasonable prospects of successful prosecution of Mr Zuma on the charges listed in the indictment," Abrahams said.

"I am of the view that a trial court would be the most appropriate forum for these issues to be ventilated and to be decided upon."

Twelve are of fraud, one of racketeering, two of corruption and one of money laundering.

There was no immediate comment from Zuma and it was not immediately clear when the former leader might go to trial.

Zuma was deputy president at the time of the arms deal. Schabir Shaikh, his former financial adviser, was found guilty and jailed in 2005 for trying to solicit bribes for Zuma from a French arms company.

The 16 counts were filed against Zuma but then dropped by the NPA shortly before he successfully ran for president in 2009.

Since his election nine years ago, his opponents have fought a lengthy legal battle to have the charges reinstated. Zuma countered with his own legal challenges.

The ANC said it had confidence in the country's criminal justice system and the independence of the judiciary.

"We continue to assert the inalienable right of all in our country, including Comrade Jacob Zuma, to be presumed innocent until and if proven guilty," the party said in a statement.

Mmusi Maimane, the official opposition leader and head of the Democratic Alliance party, said: "This is a victory for all who have fought for years for Jacob Zuma to face accountability for his crimes. That accountability starts now."

Pierre de Vos, a law professor at the University of Cape Town, said Zuma could seek a court order to block the case against him by asking for "a permanent stay of prosecution so that the court decides whether he is capable of getting a fair trial. That could be done of course, that is a possibility."

In 2016, Zuma said a four-year investigation he set up while president had found no evidence of widespread bribery, corruption or fraud in the selection of bidders to supply the arms. Nor had it found evidence that officials were bribed in an attempt to influence the deal.

The former South African leader was beset by scandal during his tenure as president.

He survived several motions of no-confidence in parliament and the Constitutional Court said he breached the law by ignoring an order to repay some of the $16 million in state funds spent on renovating his home. Zuma has since repaid some of the money, as ordered by the court.

The former president has also been implicated by South Africa's anti-corruption watchdog in a 2016 report that alleges the Gupta family, billionaire friends of Zuma, used links with him to win state contracts. An inquiry on the influence-peddling allegations is due to start soon.

The Guptas and Zuma have denied any wrongdoing. ($1 = 11.9015 rand) (Additional reporting and writing by James Macharia; editing by Andrew Roche)