Secret videos give a disturbing look at the FDA's cruel, taxpayer-funded experiments on baby monkeys 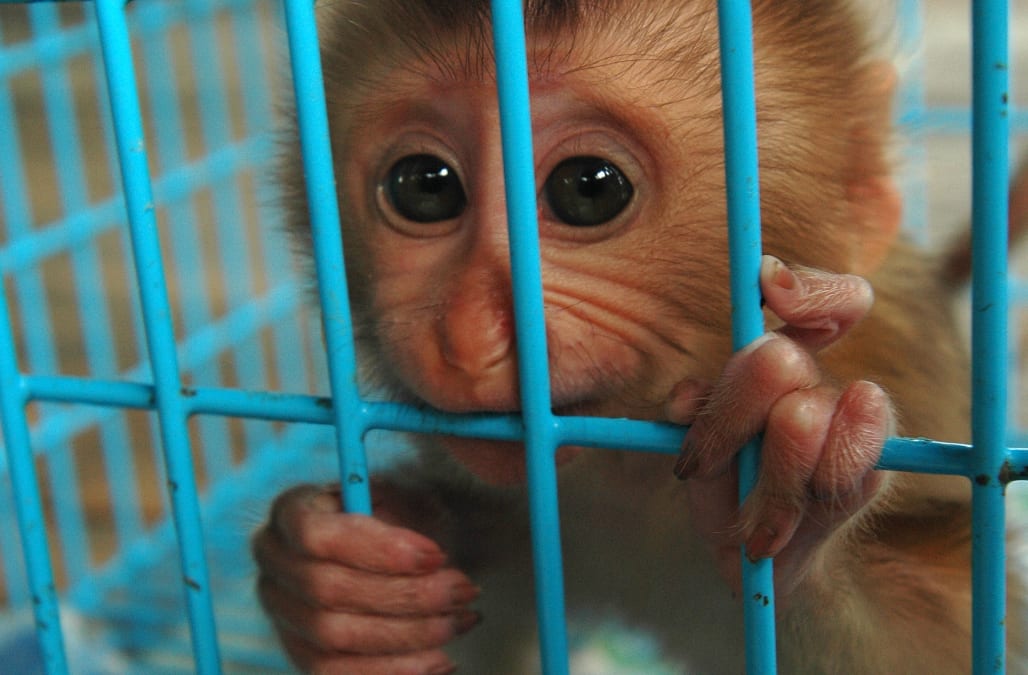 Following an exclusive Rare story exposing its inhuman and nontransparent nicotine addiction experiments on monkeys aimed at observing human teenagers’ smoking habits, the agency swiftly and inexplicably canceled the tests and sent dozens of the monkeys involved to a sanctuary. However, White Coat Waste Project, a bipartisan group of fiscal conservatives and animal rights activists, quickly filed and just won a lawsuit to compel the FDA to release the videos in the name of transparency and accountability when it comes to government spending on wasteful and cruel animal experiments.

The troubling videos taken at the FDA’s Arkansas facility give insight into the experiments, which required 12 adolescent monkeys and 12 adult monkeys who were forced to undergo surgeries to implant catheters in their bodies to deliver nicotine directly to their arteries. Afterwards, they were fitted with nylon vests, which they must wear constantly to keep the equipment implanted inside them secure, and were confined in restraint chairs and trained to press levers to receive nicotine infusions. Footage from the tests shows baby monkeys locked in small cages, wearing vests that contain catheters to infuse nicotine, exhibiting distressed behavior, and even being taunted by staff. At some points, the monkeys can be seen being confined in dark chambers and slumped over after receiving hits of nicotine.

Additionally, the lawsuit win also forced the release of other documents related to the study, which detail four monkey deaths since 2015 that were not properly reported as well as other instances of waste and abuse, including animals being killed by mishandling, unapproved procedures, and starvation.

“Bureaucrats spending millions of Americans’ hard-earned tax dollars to hook primates on nicotine is exactly the kind of government monkey business that needs to be exposed and ended,” Congressman Matt Gaetz (R-FL) told Rare. “This is an important and decisive victory, but there’s still much more work to be done, and I’m proud to lead bipartisan efforts to cut ridiculous and unnecessary tests on monkeys, dogs and other animals at the FDA, EPA, VA and other federal agencies.”

White Coat Waste’s legal victory comes just two months after the FDA announced it would permanently cancel the experiments and released new guidelines for finding alternatives to animal testing. Now, the group is continuing to advocate for the passage of the Federal Accountability in Chemical Testing (FACT) Act, which would “improve reporting by EPA, FDA, NIH, USDA and other government agencies about their efforts to replace inefficient, multi-million-dollar animal tests with faster, less costly and more effective alternative methods for assessing the safety of chemicals, drugs, foods, cosmetics and other substances.”

RELATED: The VA announces efforts to reduce cruel and wasteful experiments on dogs amid intense scrutiny

“There’s a stunning lack of transparency and accountability about how the government is spending our money in animal laboratories, and it’s critical that taxpayers speak up, because it’s clear that they can make a difference,” Justin Goodman, Vice President of Advocacy and Public Policy at White Coat Waste Project, told Rare. “Nicotine experiments on monkeys have not improved public health. The FDA has decided that it’s in the best interest of the agency, taxpayers and animals to end the project and to send the primates to sanctuaries where they belong.”