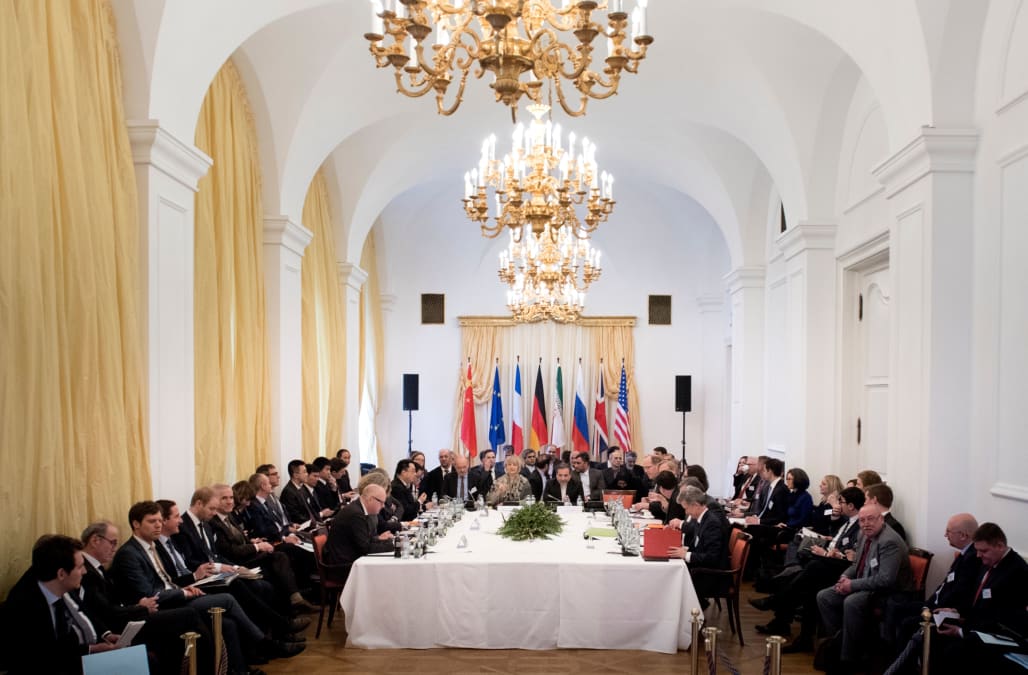 BRUSSELS/PARIS, March 16 (Reuters) - Britain, France and Germany have proposed fresh EU sanctions on Iran over its ballistic missiles and its role in Syria's war, according to a confidential document, in a bid to persuade Washington to preserve the 2015 nuclear deal with Tehran.

The joint paper, seen by Reuters, was sent to European Union capitals on Friday, said two people familiar with the matter, to sound out support for such sanctions as they would need the support of all 28 EU member governments.

The proposal is part of an EU strategy to save the accord signed by world powers that curbs Tehran's ability to develop nuclear weapons, namely by showing U.S. President Donald Trump that there are other ways to counter Iranian power abroad.

An undated handout picture shows the Iranian supersonic ballistic missile, Persian Gulf, during a war-game in an unknown location in Iran. The Arabic script reads, "Ya Aliyebn-Abitaleb", a religious title for Imam Ali, the first Imam of Shi'ite Muslims.

An undated handout picture shows the Iranian supersonic ballistic missile, Persian Gulf, launching during a war-game in an unknown location in Iran.

FILE PHOTO: A display featuring missiles and a portrait of Iran's Supreme Leader Ayatollah Ali Khamenei is seen at Baharestan Square in Tehran, Iran September 27, 2017. Picture taken September 27, 2017. Nazanin Tabatabaee Yazdi/TIMA via REUTERS ATTENTION EDITORS - THIS IMAGE WAS PROVIDED BY A THIRD PARTY/File Photo
Up Next

Trump delivered an ultimatum to the European signatories on Jan. 12. It said they must agree to "fix the terrible flaws of the Iran nuclear deal" - which was sealed under his predecessor Barack Obama - or he would refuse to extend U.S. sanctions relief on Iran. U.S. sanctions will resume unless Trump issues fresh "waivers" to suspend them on May 12.

"We will therefore be circulating in the coming days a list of persons and entities that we believe should be targeted in view of their publicly demonstrated roles," the document said, referring to Iranian ballistic missile tests and Tehran's role in backing Syria's government in the seven-year-old civil war.

The steps would go beyond what a U.S. State Department cable seen by Reuters last month outlined as a path to satisfy Trump: simply committing to improving the nuclear deal.

It also reflects frustration with Tehran. "We're getting irritated. We've been talking to them for 18 months and have had no progress on these issues," a diplomat said.

European Union foreign ministers will discuss the proposal at a closed-door meeting on Monday in Brussels, diplomats said.

Analysts say the nuclear agreement, touted at the time as a breakthrough reducing the risk of a devastating wider war in the Middle East, could collapse if Washington pulls out.

"If the United States makes the mistake of pulling out of the JCPOA, it will definitely be a painful mistake for the Americans," Iranian state television quoted Zarif as saying. The JCPOA is the formal name of the nuclear deal.

Zarif did not refer to the possibility of new EU sanctions.

The commission overseeing the nuclear accord said on Friday in Vienna that Iran was meeting its obligations under the deal.

The joint document by Britain, France and Germany said they were engaged in "intensive talks with the Trump administration to "achieve a clear and lasting reaffirmation of U.S. support for the (nuclear) agreement beyond May 12."

The proposal follows weeks of talks between the State Department and European powers as they try to mollify the Trump administration, which is split between those who want to tear up the agreement and those who wish to preserve it.

A U.S. State Department official declined to comment, adding, "We don't want to get ahead of the EU's decision-making process ... There is broad agreement on the areas that need strengthening, but how that's done in each of the three areas is the subject of our negotiations."

A different U.S. official cited "very good" talks with London, Paris and Berlin this week in Vienna on the issue.

The document referred to sanctions that would "target militias and commanders." It proposes building on the EU's existing sanctions list related to Syria, which includes travel bans and asset freezes on individuals, and a ban on doing business or financing public and private companies.

It was strident in its criticism of Iran's ballistic weapons, which Tehran says are for defensive purposes, saying there were "transfers of Iranian missiles and missile technology" to Syria and allies of Tehran, such as Houthi rebels in Yemen and Lebanon's Iran-backed Shi'ite Hezbollah.

"Such a proliferation of Iranian missile capabilities throughout the region is an additional and serious source of concern," the document said.

While the EU retains some sanctions on Iranians over human rights abuses, it rescinded its economic and financial restrictions on Iran in 2016 and does not want to be seen to be reneging on the agreement.

Iran signed up to limits on its uranium enrichment activity, which it has repeatedly said is for peaceful power generation, not atomic bombs, but has refused to discuss its missiles.

The Islamic Republic has dismissed Western assertions that its activities in the Middle East are destabilizing and also rejected Trump's demands to renegotiate the nuclear accord.

In the joint document, Britain, France and Germany set out questions and answers that seek to show that legally, the European powers would not be breaking the terms of the nuclear deal. It said they are "entitled to adopt additional sanctions against Iran" as long as they are not nuclear-related or were previously lifted under the nuclear agreement.

The European powers said new sanctions are justified because Iran "did not commit further to stop undertaking ballistic missile destabilizing activities" under the nuclear agreement.

The nuclear deal's terms did not cover ballistic missile activity. (Additional reporting by Parisa Hafezi in Ankara and Lesley Wroughton in Washington Editing by Gareth Jones and James Dalgleish)