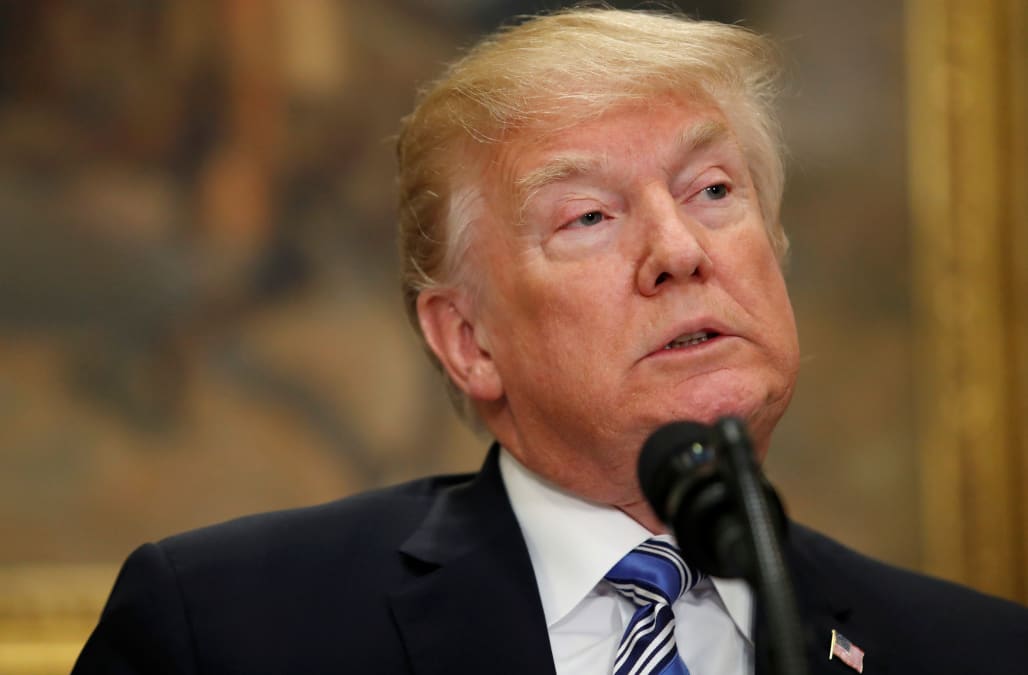 Sessions has been a target of Trump's ire since he recused himself from the FBI's Russia investigation last March, following reports that he was not forthcoming during his Senate confirmation hearing about his contacts with Russian officials during the 2016 campaign season.

Sessions' recusal is a key point of frustration for Trump, who once reportedly asked why he couldn't order "my guys" at the "Trump Justice Department" to do what he wanted.

When the Russia investigation began picking up steam last summer, so did Trump's attacks on his hand-picked attorney general, whom he called "weak" and "beleaguered" in a string of Twitter rampages.

He also repeatedly suggested Sessions should replace then-deputy FBI director Andrew McCabe, whom Trump described as "a Comey friend who was in charge of the Clinton investigation," and asked why the FBI wasn't investigating former Democratic nominee Hillary Clinton.

McCabe was forced out of the FBI earlier this year amid an internal investigation into his handling of the Clinton email probe. On Wednesday, The New York Times reported that Sessions is weighing whether or not to fire McCabe over his alleged misconduct days before he's set to retire.

Trump's tweets last summer came after he admitted, during an interview with The Times the previous week, that he would not have nominated Sessions to be attorney general if he had known Sessions would recuse himself from the Russia investigation.

"Sessions should have never recused himself, and if he was going to recuse himself, he should have told me before he took the job, and I would have picked somebody else," Trump told the outlet.

Sessions said this weekend that he believes he made the right decision by stepping aside from the DOJ's Russia investigation.

The special counsel Robert Mueller is believed to be focusing on the time period last summer when Trump ramped up his attempts to pressure Sessions to carry out his suggestions. That inquiry makes up one thread of Mueller's investigation into whether Trump sought to obstruct justice when he fired FBI director James Comey last May.

The White House initially said Comey was fired because of the way he handled the FBI's investigation into Hillary Clinton's use of a private email server. But Trump later said on national television that he fired Comey, in part, because of "this Russia thing." He also reportedly told two top Russian government officials that dismissing the FBI director had taken "great pressure" off of him.

After Comey's firing, Deputy Attorney General Rod Rosenstein appointed Mueller as special counsel in charge of the Russia investigation. Typically, the appointment of a special counsel falls on the attorney general, but Sessions did not participate in the decision because he was recused.

In the event that Sessions is fired, Vanity Fair reported, Trump is mulling over replacing him with Scott Pruitt, who currently heads up the Environmental Protection Agency.

Although he is already a Cabinet secretary, Pruitt would need to go through a second Senate confirmation hearing because he would be moving to a different department. But since the Senate green-lighted him once before, it likely wouldn't be as difficult as confirming a new nominee.

This type of rapid Cabinet shuffling is unprecedented in US history. Trump also nominated Mike Pompeo, who was CIA director, to be his new secretary of state after he fired Rex Tillerson on Monday. Pompeo's second confirmation hearing will likely take place in April.

If Pruitt became the attorney general, he would not be recused from the Russia investigation, and could theoretically fire the special counsel.

NOW WATCH: Neo-Nazi groups let a journalist in their meetings and rallies — here's what he saw