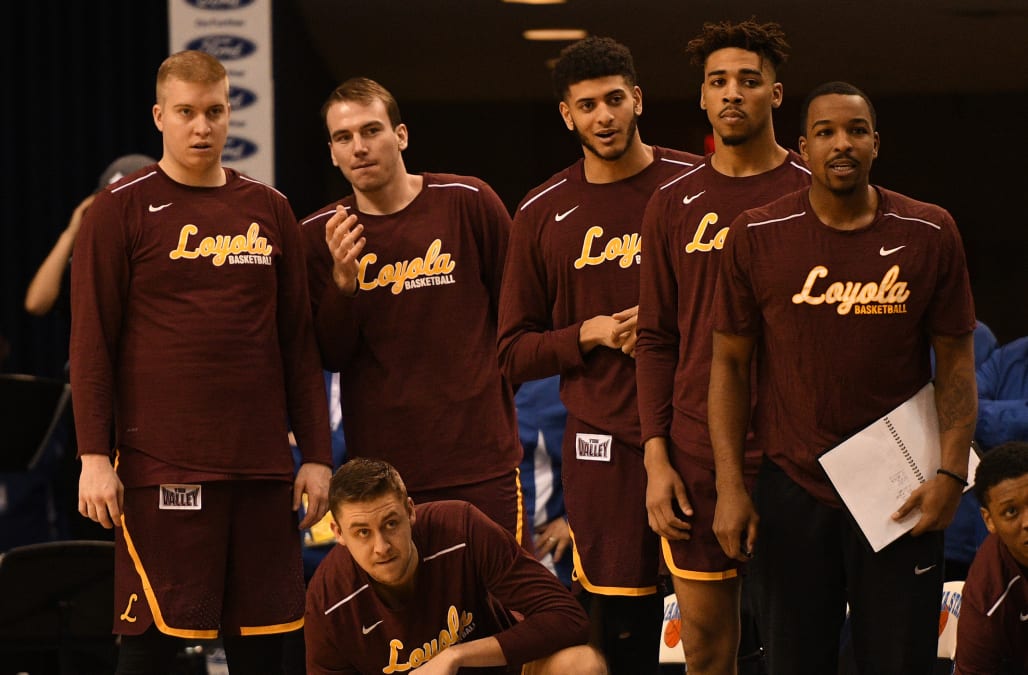 When it makes its first NCAA tournament appearance in 33 years this week, the Loyola-Chicago men’s basketball team will have a secret weapon at its disposal.

Actually, it doesn’t sound quite right to label a 98-year-old nun as “a weapon.” But there’s no denying that Sister Jean Dolores Schmidt brings a higher power to the Missouri Valley champs.

Though she’s nowhere near as tall as the players — or many other students, for that matter — Schmidt cuts a large figure on the 16,000-student campus located on Chicago’s north side.  She’s a prominent part of the team’s pregame huddles, is featured on videos on the scoreboard during the game and even has her own bobblehead and personalized maroon-and-gold sneakers (“Sister” is stitched on the back of one shoe, “Jean” on the other).

Loyola won the 1963 NCAA tournament, a landmark victory achieved when the school refused to abide by an unspoken rule  in the sport that teams would play no more than two black players at a time. Despite that prominent place in history, basketball success has been hard to come by in the ensuing decades. The school last made the NCAA tournament in 1985, long before any of today’s players were born and six years before Schmidt was hired by Loyola after her former school (a nearby women’s college) was absorbed by the larger school. (She is the last of 27 nuns who came to Loyola in that deal.)

Sister Jean is expected to be in attendance once eleventh-seeded Loyola puts an end to that drought on Thursday afternoon. It’ll face seventh-seeded Miami (Fla.) in a first-round matchup at 3:10 CT in Dallas. Her role with the team has already attracted plenty of media attention from outlets looking for great human interest stories; she was featured prominently in Wednesday’s editions of the New York Times.

The best mascots to pick during March Madness

No, there's no team called the "Ibises" in the tournament this year. Sebastian the Ibis is the mascot for the Miami Hurricanes. It's a little misleading, sure, but you can't say an ibis isn't unique in this bracket of tigers, bisons and wildcats.

A regular old pig wouldn't be that intimidating. Luckily for Arkansas, a bright red hog called a "razorback" is a pretty big step up.

No. 1 seeded Virginia boasts a Cavalier as its mascot. Normally, human mascots aren't all that exciting, but we have to give this guy credit for that impeccable goatee.

Yes, UMBC retriever, you are a good boy.

Do not challenge the Michigan State Spartan to any sort of physical competition. You will lose.

As weird as the Syracuse Orange may be, it's a classic. Never count out the Orange.

Hey, Cincinnati, what is a bearcat? Is it a bear? Is it a cat? Is it half bear, half cat? We need answers! But we love it, regardless.

Did you know that originally, a "jayhawk" was a Civil War guerrilla fighter? That makes the Kansas Jayhawk a lot more impressive.

TCU's horned frog looks like an amphibian made of stone. That'd be hard to play basketball against, and also, it just looks super cool.

The undeniable top dog of this and every year's crop of mascots is the Butler Bulldog. Though Butler is a 10 seed and likely won't make it to the championship, the team's mascot deserves all the treats and belly rubs in the world.

BONUS: Do not ever pick the Providence Friars. We would also recommend avoiding direct eye contact. This thing is terrifying.

To call her a mascot would be selling Schmidt short, because she provides plenty of spiritual and emotional support. Her motto of “Worship, work, win” is featured in the athletic department’s weight room and she sends both coaches and players individual emails with her observations after each game. One player told DNAInfo in 2012 that Schmidt was one of the things that stopped him from being a homesick 17-year-old.

Schmidt played basketball when she was younger and has now been a nun for over 80 years, many of which she spent attending every Loyola basketball game. Her first extended absence came this season when she missed eight games after falling and breaking her hip.

She still followed each contest on an iPad as it unfolded.

Though Schmidt was able to make the trip to St. Louis to see Loyola clinch its bid at the Missouri Valley championship, there is a chance that doctors might not give her the last-minute medial clearance to travel to Texas.

But if that happens, Loyola’s players know that she will be watching and providing her support after the game, win or lose.

“There’s been days throughout my last four years when I had a bad game, a down game,” senior Donte Ingram told the New York Times. “We might have won. We might have lost. But at the end of the message, she always found a way to make me feel better.”

More from Yahoo Sports:
• No, Altuve was not glaring at President Trump
• Eric Adelson: The quiet aftermath of the scary foul that went viral
• Packers revamp passing attack in one fell swoop
• Warriors cancel practice after Curry’s wild birthday party