Stephen Hawking had a 'sense of humor as vast as the universe': unique tributes flood in for esteemed scientist 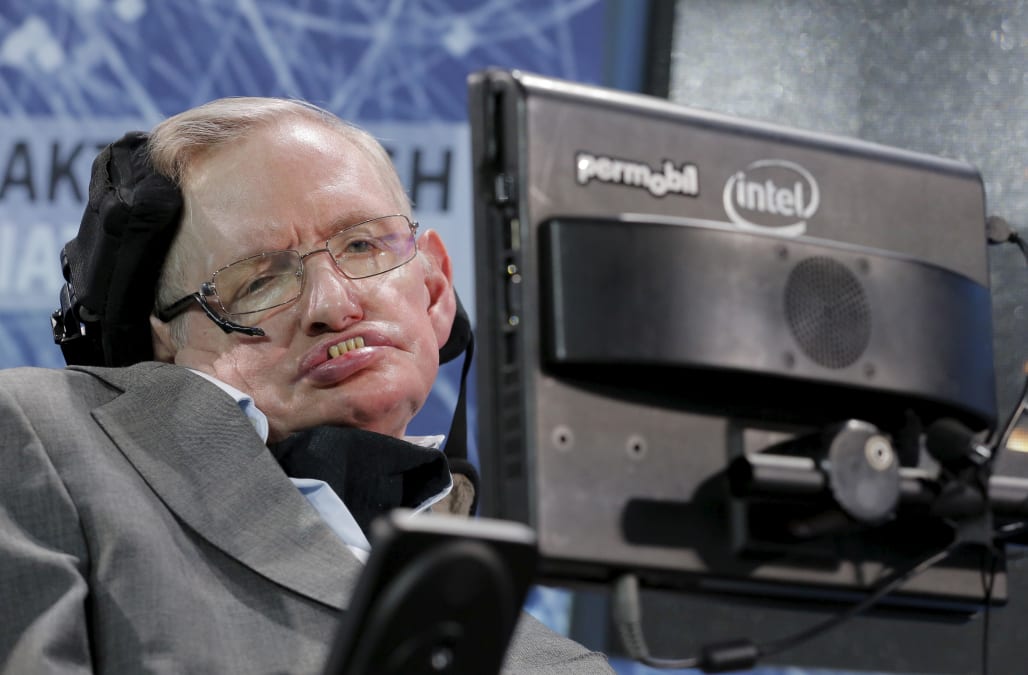 Celebrities, public figures, and scientists from around the world have begun sending tributes to physicist Stephen Hawking, who died at the age of 76 early Wednesday morning.

American astrophysicist and Twitter celebrity Neil deGrasse Tyson tweeted a photo of himself and Hawking, saying that his passing has "left an intellectual vacuum in his wake."

His passing has left an intellectual vacuum in his wake. But it's not empty. Think of it as a kind of vacuum energy permeating the fabric of spacetime that defies measure. Stephen Hawking, RIP 1942-2018. pic.twitter.com/nAanMySqkt

Al Jean, the writer and producer of "The Simpsons," said Hawking had a "sense of humor as vast as the universe."

.@TheSimpsons RIP Stephen Hawking. A sense of humor as vast as the universe. pic.twitter.com/528kWRhfVR

Hawking was known for his biting sense of humor, and had said that it "is what keeps me going."

In 1999, the Nobel prize-winning physicist appeared on an episode of "The Simpsons," and appeared on the show three more times in following years.

The role helped earn Hawking a place as a pop-culture icon — he joked he was often mistaken for a character on "The Simpsons" — and he praised the series as “the best thing on American television.”

Actor and Home Alone star Macaulay Culkin said the late physicist was "both a genius and my favorite Simpsons character."

I just heard about Stephen Hawking's passing. He was both a genius and my favorite Simpsons character. We'll miss you, buddy.

Plait described how Hawking discovered how "the most powerful objects in the Universe" black holes "eventually dissolve," and how Hawking lived for another 55 years despite his ALS diagnosis.

"He was the definition of mind over matter," Plait said.

2) He had ALS, and when diagnosed he was given two years to live. He lived another 55.

He was the definition of mind over matter.

Mayim Bialik, who is both a neuroscientist and star of the TV series "The Big Bang Theory," tweeted that in his passing, Hawking was "free from the physical constraints of this earthly condition we all exist in" and was now "soaring" above the world.

As we near Pi day (3.14) I join the global community in mourning the loss of the greatest physicist of our era. #StephenHawking is free from the physical constraints of this earthly condition we all exist in and he is soaring above us now marveling at it all. pic.twitter.com/o3V0TZrppj

"Hawking was a great scientist. The world might not have known him had he never suffered from his illness, but they should have," Buckley tweeted, before highlighting Hawking's incredible work on black holes.

Hawking was a great scientist. The world might not have known of him had he never suffered from his illness, but they should have.

Just wanted to talk a bit about his work.

NASA tweeted a tribute video to Hawking, whose theories "unlocked a universe of possibilities" that the world continues to discover.

Remembering Stephen Hawking, a renowned physicist and ambassador of science. His theories unlocked a universe of possibilities that we & the world are exploring. May you keep flying like superman in microgravity, as you said to astronauts on @Space_Station in 2014 pic.twitter.com/FeR4fd2zZ5

Professor Stephen Hawking was an outstanding scientist and academic. His grit and tenacity inspired people all over the world. His demise is anguishing. Professor Hawking’s pioneering work made our world a better place. May his soul rest in peace.

Former US Ambassador to the UN Samantha Power underlined Hawking's kind heart in addition to his brilliant mind.

R.I.P. Stephen Hawking. Among his many profound contributions to this world was this simple sentiment: “It would not be much of a universe if it wasn’t home to the people you love.”

Hawking, who had been suffering from ALS for many years, died "peacefully in his home" on Monday, according to a family statement.

Hawking made several discoveries that transformed the way scientists viewed black holes and the universe.

He is survived by his three children, Lucy, Robert, and Tim.

NOW WATCH: This indoor farm in New Jersey can grow 365 days a year and uses 95% less water than a typical farm