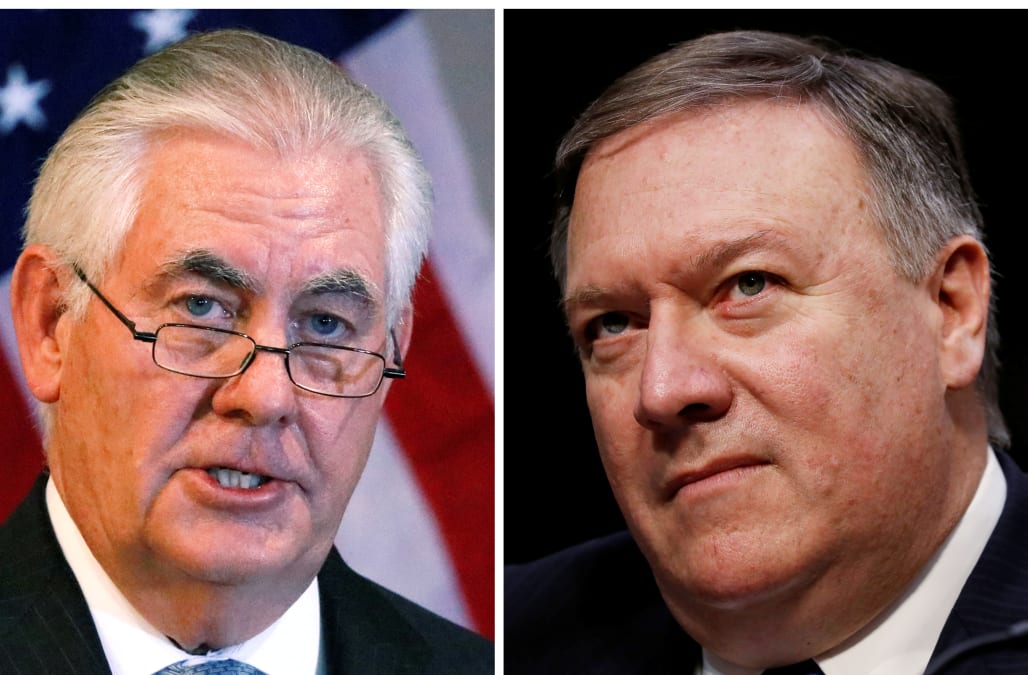 The biggest shakeup of Trump's Cabinet since he took office in January 2017 was announced by the president on Twitter as his administration prepares for an unprecedented meeting with the leader of North Korea.

"We've been talking about this for a long time," Trump said on the White House lawn on Tuesday. "We got along actually quite well but we disagreed on things."

He cited the Iran nuclear deal as an example of disagreements with Tillerson and said he and Pompeo have "a similar thought process."

Senior State Department officials said Tillerson was unaware of why Trump pushed him out and that he had intended to stay in the job.

On Monday, Tillerson blamed Russia for the poisonings in England of a former Russian double agent and his daughter. Earlier, White House press secretary Sarah Sanders had refrained from saying Moscow was responsible.

A senior White House official said Trump asked Tillerson to step down on Friday but did not want to make it public while he was on a trip to Africa. Trump's Twitter announcement came only a few hours after Tillerson landed in Washington after the trip, which had been cut short.

The official said Trump works well with Pompeo, a former Republican congressman from Kansas, and wanted him in place before the U.S. president's planned talks with North Korean leader Kim Jong Un and trade negotiations.

Tillerson had no diplomatic or political experience before becoming secretary of state. He appeared out of the loop last week when Trump announced he would meet with North Korea's Kim.

Stocks pared gains on the Tillerson news, but then stabilized. S&P futures were last up 0.3 percent.

Senior Trump administration officials also made it known in November that the White House had drafted a plan to replace Tillerson.

In December Tillerson had offered to begin direct talks with North Korea without pre-conditions, backing away from a key U.S. demand that Pyongyang must first accept that any negotiations would be about giving up its nuclear arsenal.

But the White House distanced itself from those remarks, and a few days later, Tillerson himself backed off.

Several months earlier in Beijing, Tillerson told reporters the United States was directly communicating with North Korea but that Pyongyang had shown no interest in dialog. Trump contradictedTillerson's efforts a day later.

"I told Rex Tillerson, our wonderful Secretary of State, that he is wasting his time trying to negotiate with Little Rocket Man," Trump wrote on Twitter, using a pejorative nickname for Kim. "Save your energy Rex, we'll do what has to be done!" Trump added.

RELATED: Rex Tillerson through the years

Early in 2018, Trump said on Twitter that Tillerson was "wasting his time" trying to negotiate with North Korea. Tillerson had joined Defense Secretary Jim Mattis in pressing a skeptical Trump to stick with the agreement with Iran and other world powers over Tehran's nuclear ambitions and he has taken a more hawkish view than Trump on Russia.

In June, Tillerson urged Saudi Arabia and other Gulf Arab states to ease a blockade against Qatar, which they accuse of supporting Islamist militants and their arch-adversary Iran. Qatar calls these charges baseless.

Hours later, however, Trump accused Qatar of being a "high level" sponsor of terrorism, appearing to side firmly with Saudi Arabia, the United Arab Emirates, Bahrain and Egypt in the dispute and to undermine Tillerson's effort to adopt a more even-handed approach to broker a solution.

Tillerson also won few plaudits from career diplomats for his performance at the State Department. His tenure coincided with the departure of dozens of veteran foreign policy hands, and most of the senior policy-making positions remain unfilled. (Additional reporting by Susan Heavey, Jeff Mason and Paul Simao Writing by Paul Simao Doina Chiacu Editing by Bill Trott)