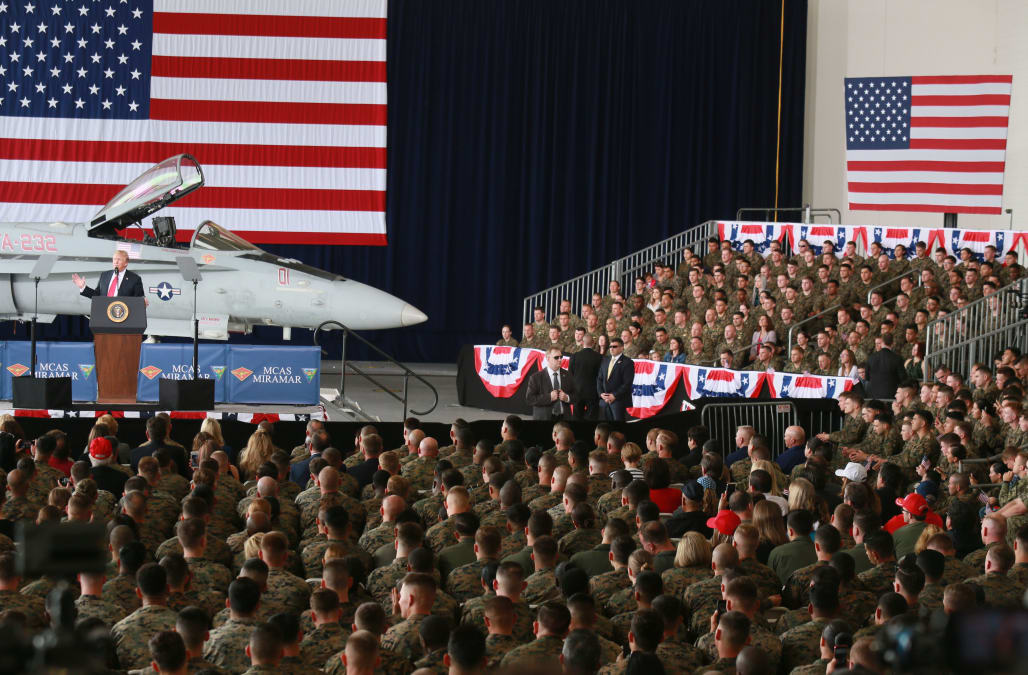 President Trump on Tuesday floated the idea of a new branch of U.S. armed forces – the “Space Force.”

“My new national strategy for space recognizes that space is a war-fighting domain, just like the land, air, and sea. We may even have a space force,” Trump said during his address to military members in San Diego.

“I was saying it the other day because we’re doing a tremendous amount of work in space,” Trump continued. “I said maybe we need a new force. We will call it the Space Force, and I was not really serious and then I said, ‘what a great idea.’ Maybe we’ll have to do that. That could happen.”

While it’s unclear how serious Trump is about the idea, social media users have already shared their thoughts.

**Click through the following slides to see how social media users reacted to President Donald Trump floating the idea of creating a 'Space Force.'**

The only good thing about Space Force is that it could finally lead to a federally funded Space Jam
LEAKED: Official Space Force uniform. https://t.co/bXkXcmEk0O
"And then he … wait, you won't believe it … and then … then he … HE SUGGESTED A SPACE FORCE!” https://t.co/HVnrXxjtaS
@CBSNews So are we going to have space cadets attending the trump college.
@CBSNews Will there be astronauts marching in the parade?
@ABC I have a great idea! Let’s call it NASA and then NOT cut any funding to it.
Okay. I saw the clip in context. He was kidding about the Space Force -- so we're not getting a real life Starship… https://t.co/qhSkP90qE7
Dear World: We would like to apologize for our extremely dumb American president. Yes, he did say “space force.” N… https://t.co/ecWPzwR7kZ
SPACE FORCE!!!!!!!!!!!!!!!!!
Meanwhile, at Trump’s Space Force: https://t.co/57XxHEdrj9
John Kelly's reaction to Trump proposing a "Space Force." https://t.co/4RAKmiPXmM
tfw you hear the president pitching his exciting new idea about an outer space "Force" https://t.co/FGNWKUx5hP
"DO YOU WANT TO JOIN THE SPACE FORCE?!" https://t.co/wFPdyvijN0
I think we all know who's going to head up the Space Force https://t.co/SMo7YXs3V3
Up Next