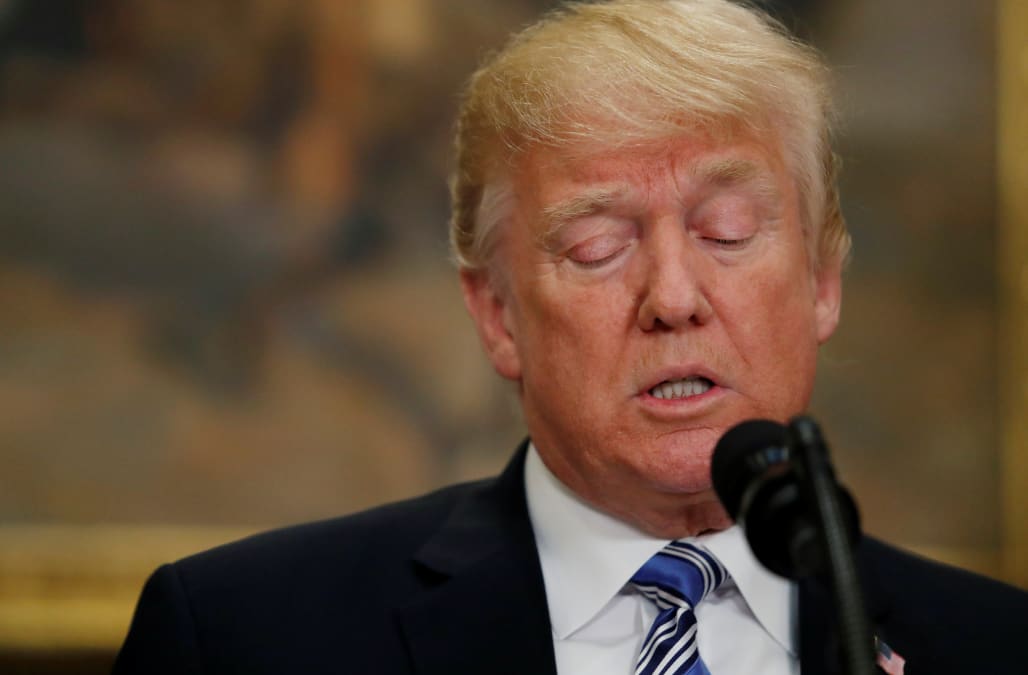 WASHINGTON, March 10 (Reuters) - U.S. President Donald Trump said on Saturday North Korea had agreed to not conduct another missile test until after proposed meetings with its leader, Kim Jong Un, had taken place, as he sought to rally international support for a potential summit.

"North Korea has not conducted a Missile Test since November 28, 2017 and has promised not to do so through our meetings. I believe they will honor that commitment!" Trump wrote on Twitter.

Trump delivering speeches during the years:

Trump's comments aligned with what a South Korean official had stated on Thursday about the possible talks. Trump made no mention of nuclear tests in his tweet, however.

It was not immediately clear which meetings Trump was referring to or their exact timing. South Korean officials said earlier this week that Trump had agreed to an invitation from Kim to meet by May.

The White House has been under fire for agreeing to talks and responded to the criticism on Friday by warning that no summit would occur unless Pyongyang took "concrete actions" over its nuclear program.

Trump also took to Twitter on Saturday to characterize the leaders of China and Japan as supportive of the potential dialog, even as he did little to clear up confusion over the timing of any talks and what preconditions would be required.

"President XI told me he appreciates that the U.S. is working to solve the problem diplomatically rather than going with the ominous alternative," Trump wrote on Twitter, referring to Chinese President Xi Jinping. "China continues to be helpful!"

Trump also tweeted on Saturday: "Spoke to Prime Minister Abe of Japan, who is very enthusiastic about talks with North Korea. Also discussing opening up Japan to much better trade with the U.S. Currently have a massive $100 Billion Trade Deficit. Not fair or sustainable. It will all work out!," Trump wrote.

Late on Friday Trump wrote that a deal with North Korea "is very much in the making and will be, if completed, a very good one for the World. Time and place to be determined."

The Twitter posts followed a news briefing by White House spokeswoman Sarah Sanders on Friday where she said Trump would not have a meeting "without seeing concrete steps and concrete actions take place by North Korea, so the president will actually be getting something."

Kim had earlier invited Trump to join him for what would be unprecedented talks between leaders of the two nations.

Sanders did not specify what actions North Korea needed to take, and a White House official later said she was not intending to set new conditions. But the comments were a sign that an end to a standoff between the two countries over North Korea's nuclear weapon program is not imminent.

The United States has long said it wants any talks to aim at Pyongyang abandoning its nuclear weapons and missile programs.

Hopes for a breakthrough had risen on Thursday when Trump said he was ready to meet with Kim.

The two leaders prompted jitters around the world last year as they exchanged bellicose insults over the North's attempts to develop a nuclear weapon capable of hitting the United States. Pyongyang has pursued its nuclear program in defiance of United Nations Security Council resolutions.

But tension eased around last month's Winter Olympics in South Korea, laying the groundwork for what would be the biggest foreign policy gamble for Trump since he took office in January 2017.

The head of South Korea's National Security Office, Chung Eui-yong, speaking in Washington on Thursday after briefing Trump about a meeting South Korean officials held with Kim this week, said the U.S. president had agreed to meet the North Korean leader by May in response to an invitation from Kim.

Trump's sudden decision to meet with Kim stunned even people in his own administration.

"The expectation is that the talks would lead to a discussion around a conclusion that we're ready to engage in negotiations," a senior State Department official said on Friday.

Sanders' comments seemed aimed at criticism Trump had been wrong to agree to talks, giving Pyongyang the international legitimacy it seeks without earning any big concessions in return.

Some U.S. officials and experts worry North Korea could buy time to build up and refine its nuclear arsenal if it drags out talks with Washington.

A White House official said on Friday Trump remained committed to a meeting based on conditions laid out by South Korea: that Kim is committed to denuclearization, will refrain from any further nuclear or missile tests, and understands that U.S.-South Korean military exercises must continue.

The talks are expected to be held in May. Neutral Switzerland, which often hosts summits, said it was ready to help.

A Trump-Kim summit would be a major turnaround after a year in which North Korea has carried out a battery of missile tests and after a barrage of insults between the two leaders.

U.S.-based experts say North Korea appeared to show last November that it has succeeded in developing a missile capable of delivering a nuclear weapon anywhere in the United States.

Trump has derided Kim as a "maniac," referred to him as "little rocket man" and threatened in a speech last year to "totally destroy" North Korea, a country of 26 million people, if it attacked the United States or one of its allies.

The Trump administration has led a worldwide push to tighten international sanctions on North Korea to choke off resources needed for its weapons programs.