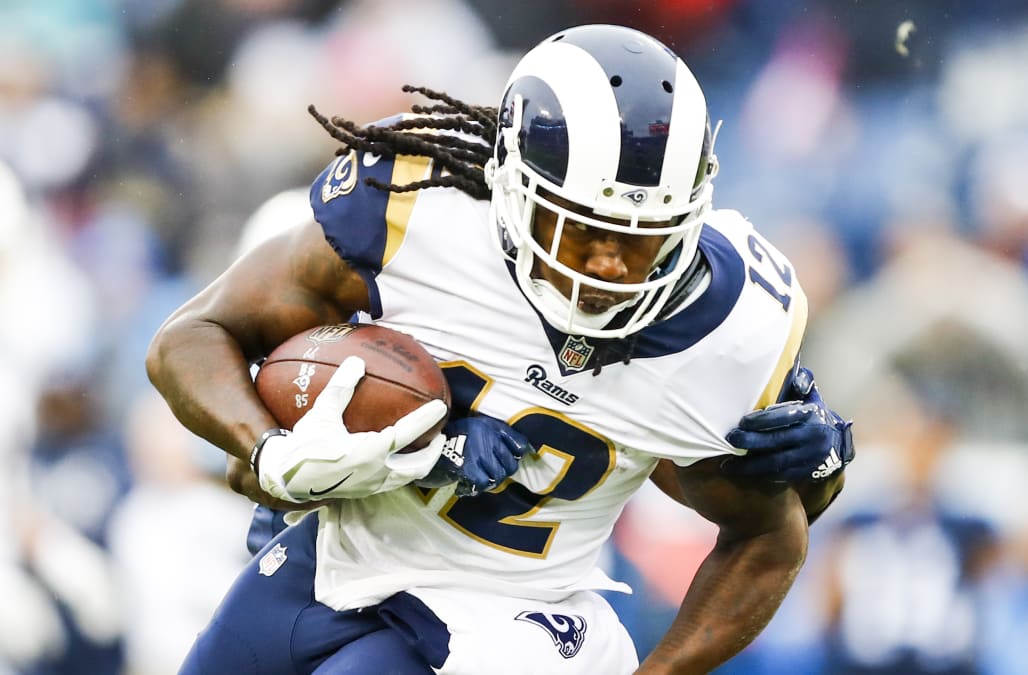 When the Pittsburgh Steelers told running back Le’Veon Bell he’d be getting the franchise tag again, it wasn’t unexpected. However, it put a huge dent in the skill-position players available in free agency. So did the Miami Dolphins’ decision to tag receiver Jarvis Landry.

Some interesting players will hit the market, especially if Allen Robinson and Sammy Watkins don’t get the franchise tag before Tuesday’s deadline (as has been speculated in various reports). Competition for the top free-agent receivers and tight ends should be fierce, considering there aren’t a lot of instant impact players in the draft at those positions. The opposite might be true at running back, because there will be good tailback prospects throughout the draft.

Here are the top running backs, receivers and tight ends about to hit free agency (though the list could change a bit based on franchise-tag decisions before Tuesday’s deadline):

20. TE Austin Seferian-Jenkins
Seferian-Jenkins has been open about battling alcoholism, which certainly contributed to him bombing with the Buccaneers. With the Jets last season he had his moments, though he averaged just 7.1 yards on 50 catches. Will some team see bigger things for him given his draft pedigree (2014 second round) and age (25 years old)?

19. WR Donte Moncrief
The long-awaited breakout with the Colts never happened. But he flashed enough and is young enough (won’t turn 25 years old until August) that he’ll be a very interesting gamble for someone.

18. RB LeGarrette Blount
If you need a hammer for your running game, Blount can still fill that role. He wasn’t the 18-touchdown back he was with the Patriots in 2016, but he had 766 yards with the Eagles last season and helped them win a Super Bowl. He’s 31 years old but still productive in his role.

17. RB Frank Gore
Gore will be 35, but you know what you’re getting: toughness, leadership and a back who still had 961 yards behind a bad Colts line last season. Gore hasn’t missed a game since 2010. He’s not the best option as a starter, but he’d bring value to any team that signs him simply by being an ultimate professional in the locker room.

16. WR Jordan Matthews
Matthews had 16 touchdowns in his first two seasons and four in the two seasons since. Some team will see him as a solidly productive slot receiver who wasn’t in the right offense last season in Buffalo.

15. RB Jerick McKinnon
McKinnon built a market for himself after Dalvin Cook’s injury. He was productive in a timeshare with Latavius Murray, and he can reprise that change-of-pace role with some other team.

14. RB Doug Martin
If you want to be supremely optimistic, here’s a former All-Pro running back who hasn’t been overworked and is still on the good side of 30 years old. Of course, Martin played six seasons with the Buccaneers, and had two fine seasons and four absolutely awful ones. It’s hard to count on him.

13. RB Rex Burkhead
Burkhead was emerging as a nice option in the Patriots offense before a knee injury set him back. Burkhead is efficient as a runner and good as a receiver, and he could be a great fit with a team that knows how to utilize him.

12. WR John Brown
In 2015, Brown gained 1,003 yards as a 25-year-old with the Cardinals. Little has gone right since, as health has plagued him. But he still has blazing speed and is worth a flier. He can be a contributor if health cooperates.

11. WR Terrelle Pryor
Well, that didn’t work out well. Pryor was one of the biggest free-agent disappointments of last season after signing a one-year deal with Washington. However, the former quarterback had 1,007 yards in 2016 and his athleticism is off the charts. Maybe he’ll rebound.

10. RB Isaiah Crowell
Crowell is durable, having never missed a game, and can be a chain-moving back. He’s powerful but also with a touch of big-play ability. And while he’s not a great receiver out of the backfield, he’s capable. Crowell is also just 25 years old, which makes him appealing.
(Photo by Alan Crowhurst/Getty Images)

9. WR Marqise Lee
Lee kept improving in his four seasons with the Jaguars, and had a consistent 702-yard season in 2017 on a run-first team. He’s not a No. 1 receiver anywhere, but he can be a solid starter and perhaps significantly more productive in a more pass-friendly offense.

8. TE Tyler Eifert
Eifert would be much higher on the list if he could stay healthy. He had 13 touchdowns in 2015. Of course, he has played all of 10 games the past two seasons. He could be a steal if he can stay healthy, especially at just 27 years old, but the odds of that happening seem slim.

6. RB Dion Lewis
When healthy – a key distinction – Lewis is a dynamic and versatile threat. He’s not the biggest back and has played 16 games in a season only once, but he was very good for the Patriots last season and he can help any offense in the right role.

5. RB Carlos Hyde
Hyde is a solid, reliable back. He has a 4.2-yard average in his career. He caught 59 passes last season. He doesn’t have a 1,000-yard season but will be some team’s starter in 2017 and could have a fine season in the right situation.

4. TE Trey Burton
Burton will have plenty of teams willing to give him a huge deal based on what they’ve seen in small samples. Burton did well replacing Zach Ertz when Ertz was hurt. He had five touchdowns in limited playing time last season. Some team will pay for the potential of the athletic 26-year-old, who will always be most famous for being the passer on the “Philly Special” play that was the highlight of this year’s Super Bowl.

3. TE Jimmy Graham
Graham was once one of the best players in the NFL. He’s not that anymore, but he did make the Pro Bowl each of the last two seasons. He might not reach 1,300 yards or 16 touchdowns, as he did in his best seasons with the Saints, but he’s still a difference maker.

2. WR Sammy Watkins
Watkins was such a good prospect that the Bills traded a future first-round pick to move up to No. 4 in the 2014 draft, then took Watkins over Odell Beckham and others. Watkins has flashed that talent at times in the NFL, but has had injury issues. He had a relatively healthy 2017 season with the Rams, though he had just 593 yards. But someone will buy into the potential of the 24-year-old if the Rams don’t tag him.

1. WR Allen Robinson
If you believe Robinson’s knee is fine after a torn ACL and his poor 2016 season can be blamed on Blake Bortles, then Robinson is a rare No. 1 receiver who will hit free agency in his prime. He’s just 24 years old and in 2015 he had 1,400 yards and 14 touchdowns. He’s a big-bodied deep threat and if he hits the open market, he should get a massive deal.