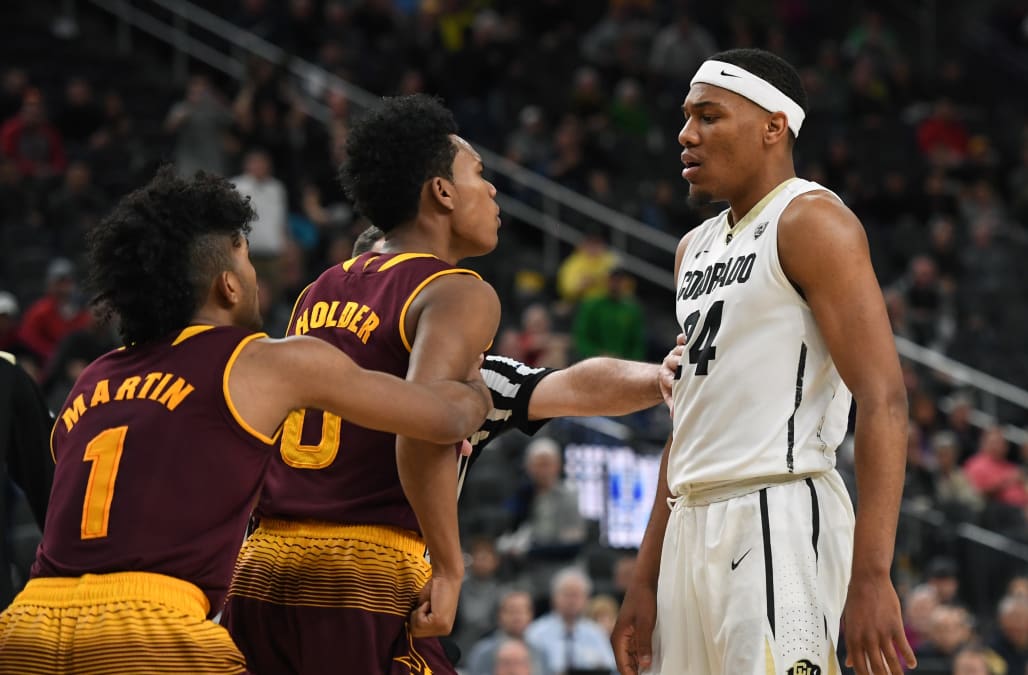 On Wednesday, the Sun Devils suffered their 11th loss in 19 games in the opening round in the Pac-12 tournament.

No doubt frustrated over going from a potential No. 1 seed to possibly falling out of the NCAA tournament altogether, Arizona State allowed its emotions to boil over late in a 97-85 loss to Colorado.

With the Buffaloes up nine in the final seconds and the shot clock about to expire, McKinley Wright connected with Tyler Bey for a needless alley-oop dunk. Tra Holder, ASU’s best player, did not take kindly to the showboating, and the following ensued.

Tad Boyle appeared to get injured while responding to a scuffle during CU-ASU pic.twitter.com/YIxy7RRpgt

Not much came of the incident other than Holder and Colorado’s Namon Wright being ejected and an apparent injury to Colorado coach Tad Boyle, who came up limping and needing help off the court after running from the bench to intervene.

Tad Boyle says no to the crutches, but he’s going to need some treatment on that knee. pic.twitter.com/Nme1eQtBJ5

But it’s an appropriate microcosm for Holder and the Sun Devils, who, instead of riding high into NCAA play, will be sweating out Selection Sunday.

ASU’s strong early season resume may still be enough to earn an NCAA berth. Its 12-0 start included wins over likely No. 1 seeds Xavier and Kansas and another quality win against Kansas State.

The Sun Devils rocketed back to earth in Pac-12 play, finishing below .500 in a league that was easily the worst among the power conferences. And now losing on Wednesday in the opening round of conference tournament play assures that ASU has left its March destination in the hands of others.

Wednesday won’t be to blame if they end up in the NIT, though. The collapse was a prolonged effort.

Head coach Bobby Hurley’s brand of small ball proved successful early on, but the Sun Devils’ four-guard lineup was exposed in conference play as too small to compete on the boards. The Sun Devils ended the season with a -1 average rebounding margin — good for 240th in the NCAA — not the trait of a team built for a deep run in March.

They ended the season losing five of six games, with their only win coming against Cal, which finished the season last amongst major conference teams in KenPom rankings. And Holder, who dominated in non-conference play, wore down during the Pac-12 season, finishing an inefficient 41.1 percent from the field.

Regardless, Hurley put his coach hat on after the game and predicted good news come Sunday.

“I felt like we were in the tournament coming into this game regardless of the outcome.”

#ASU head coach Bobby Hurley on his feelings on his team's tournament hopes:

"I felt like we were in the tournament coming into this game regardless of the outcome." #VegasMadnesspic.twitter.com/4C8hCWRJIi