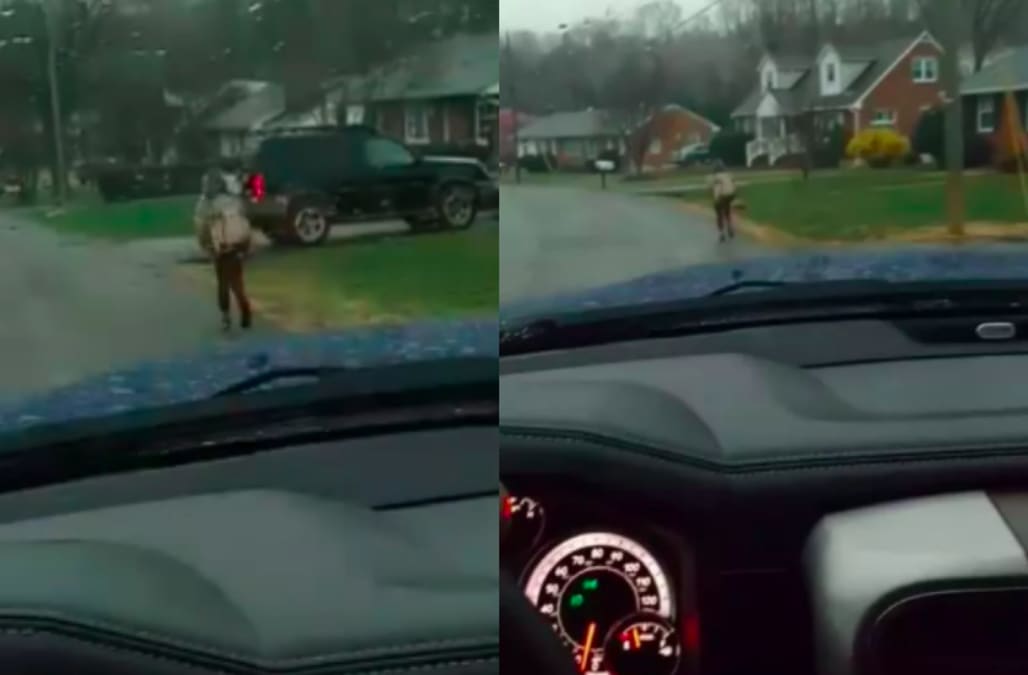 A video of a Virginia father's unorthodox punishment for his bullying son has gone viral.

Bryan Thornhill shared a Facebook Live video on March 1 showing his 10-year-old son running to school in the rain as punishment after he was kicked off his school bus for three days for bullying another student.

In the video, Thornhill says that he "does not tolerate" and "cannot stand" bullying, and refers to the unusual punishment as "old school, simple parenting." The father of two also claims that since his son has been running the mile trek to school every day, his attitude has vastly improved.

"Ironically, since he's been running to school this week, his behavior's been much better. Teachers have approved of his behavior this week," Thornhill said. He hasn't gotten in trouble this week, where last week, he was just absolutely out of his mind."

"Teach your kids, don't be a friend, be a parent," Thornhill ended his video. "That's what children need these days."

Although many social media users said they supported Thornhill's parenting methods, some were concerned that the punishment was too much for the young boy.

See reactions to this story on social media:

Dad forces bully son to run to school in rain
@foxandfriends Someone some how will find offense to this. Good for you Dad and son!
@foxandfriends I am 50 now. When I was 14 I got kicked off the bus for a week for bullying. We live in the country… https://t.co/pp5IrXwT7K
@foxandfriends Again, kid is lucky for his dad, I'd make him wear a sign, 'I'm being punished for being a bully.'
@foxandfriends Only have to do once. Beautiful. It’s what Never-spank people don’t get. When coupled with unconditi… https://t.co/G8CsqciVRA
@DailyMail The right #parenting will produce good generations. Salute to #BryanThornhill 🤣👍👍
@DailyMail That seems non-invasive, non-combative, almost passive way to let the boy think about his actions, while… https://t.co/264hY35nrG
@DailyMail The boy wouldn't be bullying other kids if he had a happy home life. This dad's "lessons" are an example… https://t.co/VpOGjovZ3U
My dad told me, “never misuse your car I’m providing for you to get to school, or you can walk”. I had to walk to s… https://t.co/dOI7BMWLbN
Up Next

Thornhill shared videos of his son's second and third runs to school on Facebook, in which he addressed some of the online backlash he has faced by providing more context surrounding the seemingly harsh punishment.

Thornhill explained that his 10-year-old is an athlete who suffers from ADHD. He said his son is used to this type of punishment because if he misbehaved during practice, his coaches would make him run miles.

The original videos amassed well over 1 million views before Thornhill deleted them from Facebook on Tuesday.

More from Aol.com:
Nurse adopts severely abused twin girls after meeting them at hospital
'Shoot a school kid only $29' billboard appears in Las Vegas
Missing CDC doctor was passed up for promotion before his disappearance