Ranking the contenders to earn No. 1 seeds in the NCAA tournament 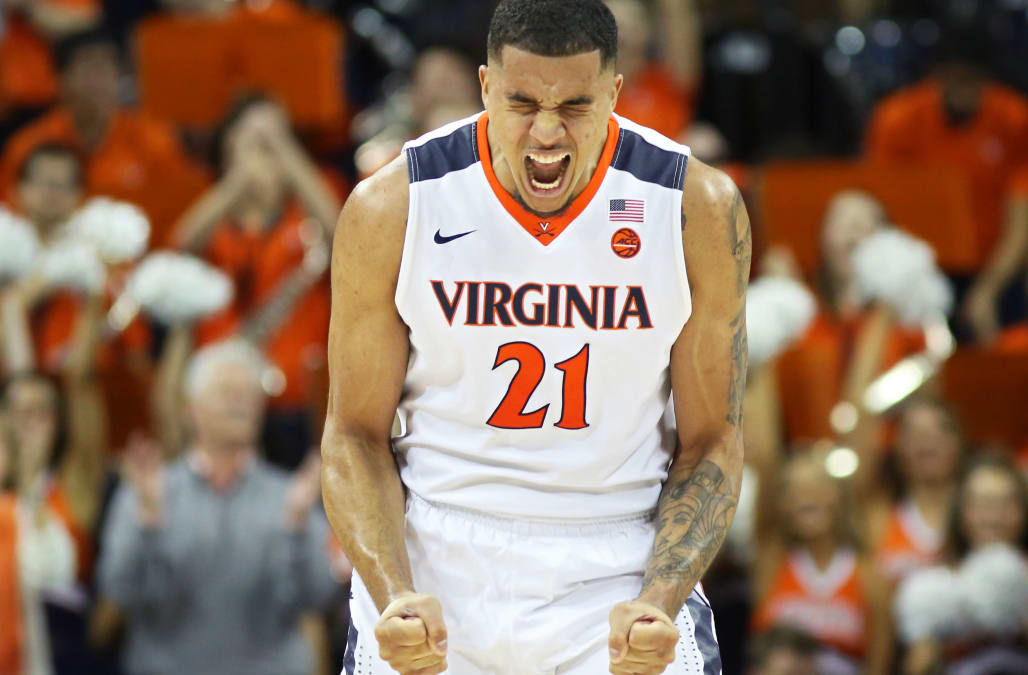 A helter-skelter college basketball season with no true title favorite has produced a surprisingly straightforward race for the No. 1 seeds.

Virginia, Villanova, Xavier and Kansas lead the pack and nobody besides Duke has a particularly realistic chance of catching any of them.

With less than a week remaining before the NCAA tournament bracket is unveiled, here is a look at the résumés of the four front-runners and the teams giving chase. Remember that the Big Ten teams on the list don’t have any more games remaining and the rest of the schools still have their respective conference tournaments.

11 PHOTOS
No. 1 seed contenders ahead of Selection Sunday
See Gallery

No. 1 seed contenders ahead of Selection Sunday

11. MICHIGAN STATE (29-4, 16-2, RPI: 14, KenPom: 6, Q1: 3-4, Q2: 6-0)
Marquee wins: North Carolina, Purdue, Notre Dame, Nebraska, Penn State
Losses: Duke, Michigan (2), at Ohio State
Outlook: To make a run at a No. 1 seed, Michigan State needed to address its shortage of tier 1 wins in the Big Ten tournament. The Spartans instead crashed out in the semifinals with only a narrow win over sub-.500 Wisconsin to show for their time in New York. Michigan State still could land a No. 3 seed thanks to its gaudy record, Big Ten regular season title and lack of losses to teams outside the RPI top 25, but the top seed line seems out of reach. The best teams the Spartans have beaten besides North Carolina and Purdue are bubble long shots Notre Dame, Nebraska and Penn State. That doesn’t compare favorably to the teams ahead of them on this list.

10. AUBURN (25-6, 13-5, RPI: 7, KenPom: 11, Q1: 7-6, Q2: 4-0)
Marquee wins: at Tennessee, Kentucky, at Missouri, Arkansas, at Murray State
Losses: Temple, at Alabama, Texas A&M, at South Carolina, at Florida, at Arkansas
Outlook: Auburn already claimed a share of its first SEC title since 1999 this season. Now the Tigers can set their sights on trying to bolster their NCAA tournament seeding with a strong showing in the SEC tournament this week. The strength of its half of the SEC bracket gives Auburn a real chance to add to its resume if it can string together a few wins this week. A potential quarterfinal victory over Texas A&M would be a tier 1 win, as would potential subsequent victories against Kentucky or Missouri and Florida or Tennessee. Three tier 1 victories and a sweep of the regular season and tournament titles in the SEC would give Auburn a shred of hope of wresting a No. 1 seed away from Xavier or Kansas, but that’s an unlikely outcome. The Tigers skidded to conclude the regular season, finishing with four losses in their final eight games.

9. PURDUE (28-6, 15-3, RPI: 8, KenPom: 5, Q1: 6-4, Q2: 6-2)
Marquee wins: Michigan (2), Arizona, Butler, at Marquette, Louisville
Losses: Tennessee, Western Kentucky, Ohio State, at Michigan State, at Wisconsin
Outlook: Any hope Purdue had of climbing to the No. 1 seed line vanished with its Big Ten title game loss to Michigan. The Boilermakers were unlikely to reach the top seed line even with a win, but now a 2 seed is their ceiling and a 3 seed is more likely. The strength of Purdue’s profile is 12 quadrant 1 and 2 victories including a regular season sweep of Michigan and a neutral-court win over Arizona in the Bahamas. The Big Ten runner-up Boilermakers are weighed down a bit by losses to sub-.500 Wisconsin and mid-major Western Kentucky.

8. TENNESSEE (23-7, 13-5, RPI: 10, KenPom: 13, Q1: 6-6, Q2: 6-1)
Marquee wins: Purdue, Kentucky (2), Texas A&M, Florida, NC State
Losses: Villanova, North Carolina, at Arkansas, Auburn, at Missouri, at Alabama, at Georgia
Outlook: It’s a testament to Rick Barnes that Tennessee is in contention for a top-three seed this season. The Vols lack a single top 100 recruit on their roster and were projected to finish 13th in the 14-team SEC in the league’s preseason poll. From edging both Purdue and NC State in the Bahamas, to sweeping Kentucky in SEC play, to coming back to grab a share of the league title, Tennessee has exceeded expectations from start to finish this season. The Vols are no worse than a No. 3 seed now and could climb a rung if they win some games in the SEC tournament. Beating out Kansas or Xavier for a No. 1 seed seems unlikely though even if Tennessee’s path to an SEC tournament title went through Florida and either Kentucky or Auburn.

7. NORTH CAROLINA (22-9, 11-7, RPI: 5, KenPom: 7, Q1: 10-7, Q2: 3-1)
Marquee wins: Duke, at Tennessee, Ohio State, Michigan, Clemson
Losses: Michigan State, Wofford, at Florida State, at Virginia, at Virginia Tech, NC State, at Clemson, Miami, at Duke
Outlook: Never before has a team with more than seven losses received a No. 1 seed. Therefore it’s tough to like North Carolina’s chances even if the sixth-seeded Tar Heels win the ACC tournament. North Carolina’s argument is similar to Kansas’ because it has 10 quadrant 1 wins, the second-most in the country behind the Jayhawks. Those include a handful of particularly strong victories over Duke, Tennessee, Michigan and Ohio State. If the Tar Heels were to go through Syracuse, Miami, Duke and Virginia to win the ACC tournament, nobody could rival either the number or the quality of their quadrant 1 wins. Would that be enough to offset North Carolina’s nine losses and vault the Tar Heels ahead of someone on the top seed line? Perhaps, but that scenario is a long shot.

6. CINCINNATI (27-4, 16-2, RPI: 9, KenPom: 4, Q1: 6-4, Q2: 8-0)
Marquee wins: at Wichita State, Houston, at UCLA, Buffalo, Mississippi State,
Losses: at Xavier, Wichita State, at Houston, Florida
Outlook: Cincinnati took a big step toward addressing the lone flaw on its résumé on Sunday. The Bearcats finally bagged their first Top 25 win of the season, defeating Wichita State at Koch Arena to claim the American regular season title outright. How high could Cincinnati climb if it sweeps the regular season and tournament titles in the American and defeats either Wichita State or Houston in the title game? A No. 2 seed is probably the Bearcats’ ceiling in that scenario. Their résumé would resemble Xavier’s current one in that scenario, but the Musketeers have a head-to-head win and tier 1 wins that carry more clout. They could have as many losses as Kansas, but they would also have at least four fewer tier 1 wins too.

5. DUKE (25-6, 13-5, RPI: 4, KenPom: 3, Q1: 5-4, Q2: 7-2)
Marquee wins: North Carolina, Michigan State, at Clemson, at Miami, Florida
Losses: Virginia, at North Carolina, at Virginia Tech, at NC State, at Boston College, at St. John’s
Outlook: Duke lacks collection of quality wins to be a No. 1 seed today, but that could certainly change by Selection Sunday. The Blue Devils’ path to an ACC tournament title could include Virginia Tech, North Carolina and Virginia, three quadrant 1 victories that might be enough to elevate Duke above Xavier or Kansas should either those teams falter. Anything short of an ACC tournament title may not be enough for Duke to pass Kansas. The Jayhawks would have one fewer loss at most and many more quadrant 1 wins. The comparison with Xavier could be more interesting since Duke would have the marquee wins the Musketeers don’t, but even then the Blue Devils would probably need to get to the ACC title game and have Chris Mack’s team crash out of its tournament early.

4. KANSAS (24-7, 13-5, RPI: 6, KenPom: 12, Q1: 11-3, Q2: 7-3)
Marquee wins: at Texas Tech, Kentucky, West Virginia (2), Kansas State (2), Texas (2)
Losses: Arizona State, Washington, Oklahoma State (2), at Baylor, at Oklahoma, Texas Tech
Outlook: Kansas’ argument for a No. 1 seed is simple enough. Nobody has beaten more good teams than the Big 12 champion Jayhawks. Eleven quadrant 1 victories is the most in the nation, two more than Virginia, six more than Duke and eight more than Michigan State. If Kansas wins the Big 12 tournament, the Jayhawks should be a No. 1 seed. If the Jayhawks are bounced early, it could open the door for someone else. No selection committee has ever awarded a No. 1 seed to a team with more than seven losses. Would an eighth loss eliminate the Jayhawks, or would their glut of quadrant 1 victories supersede that? That could be one of this year’s most polarizing decisions.

3. XAVIER (27-4, 15-3, RPI: 3, KenPom: 15, Q1: 6-4, Q2: 9-0)
Marquee wins: Cincinnati, Seton Hall (2), Creighton (2), Butler (2), Baylor
Losses: Villanova (2), Arizona State, at Providence
Outlook: Xavier already clinched its first Big East title in program history. Now the Musketeers will also try to secure a No. 1 seed for the first time. The crux of Xavier’s argument is a sparkling 15-4 record against the top two quadrants and zero losses to teams outside the RPI top 50. It hurts the Musketeers a little bit that Cincinnati is the lone RPI top 25 team they’ve beaten, but they offset that with 12 victories over teams in contention for at-large NCAA tournament bids. Sweeping the regular season and tournament titles in the Big East would all but guarantee Xavier a No. 1 seed. The Musketeers could still claim a No. 1 seed even without a Big East tournament title, but an early exit would leave them vulnerable to being leapfrogged by Duke or perhaps another team.

2. VILLANOVA (27-4, 14-4, RPI: 2, KenPom: 2, Q1: 8-3, Q2: 7-0)
Marquee wins: Xavier (2), Tennessee, Gonzaga, Seton Hall (2), Creighton
Losses: at Creighton, at Butler, at Providence, St. John’s
Outlook: Villanova finished a game behind Xavier in the Big East standings, yet the Wildcats are still ahead of the Musketeers in the NCAA tournament seeding pecking order. The primary reason is that Villanova swept the regular season series with Xavier and defeated Tennessee and Gonzaga in non-league play, giving the Wildcats a stronger collection of marquee wins than what the Musketeers can offer. If Villanova wins the Big East tournament, it will be a No. 1 seed no matter what happens elsewhere. The Wildcats would only be in jeopardy of dropping to the No. 2 seed line if they fall early, Xavier wins the Big East tournament and each of the other teams immediately behind them in the pecking order also win their conference tournaments. That’s a highly unlikely scenario.

1. VIRGINIA (28-2, 17-1, RPI: 1, KenPom: 1, Q1: 9-1, Q2: 4-1)
Marquee wins: at Duke, North Carolina, at Miami, Clemson, Rhode Island
Losses: at West Virginia, Virginia Tech
Outlook: Not only is Virginia a lock to be on the top seed line, the Cavaliers are a safe bet to be the NCAA tournament’s No. 1 overall seed. They finished at least four games clear of every other team in the ACC, they own the third-most tier 1 wins of any team in the country and they have only fallen twice all season. The worst-possible outcome for Virginia at the ACC tournament would be losing in the quarterfinals to Florida State or Louisville. There’s a chance the Cavaliers could cede the overall No. 1 seed to Villanova in that scenario if the Wildcats took the hardest possible path to a Big East tournament title, however, even then Virginia would still be the No. 1 seed in the South Region.

(Photo by Ryan M. Kelly/Getty Images)
Up Next