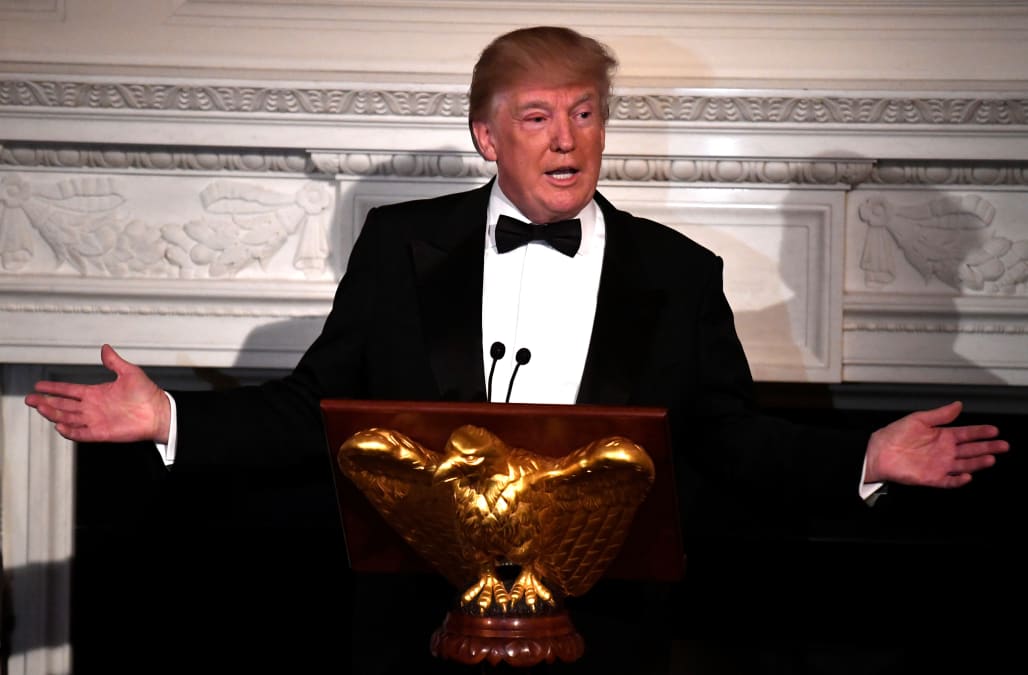 President Trump was at the annual Gridiron Club Dinner on Saturday when he said that Rep. Maxine Waters “has to immediately take an IQ test.”

The dinner is known for presidential humor and while Trump poked fun at his administration too, he saved some of his sharpest comments for Democrats.

He also referenced former Vice President Joe Biden’s line during the 2016 campaign when he said, “I wish we were in high school, I could take him behind the gym.” Biden’s comment was made after he heard Trump brag on the Access Hollywood tape that he could kiss and grope women without their consent.

“There’s talk about Joe Biden, Sleepy Joe, getting into the race,” Trump said at the dinner. “You know what he said, ‘I want to take him behind the barn.’”

Trump had a lot to say about a lot of things. He couldn’t help but bring up his embattled Attorney General, Jeff Sessions.

“Attorney General Sessions is here with us tonight. … I offered him a ride over and he recused himself. … But that’s OK,” he said before going on about the media. “We also have some of the leading lights of the media here including some folks from the failing New York Times. That sucker is failing! … I know we have our differences, but I also know that you have a very special place … in my heart. … The other day they had five stories on the front page of the New York Times and every one of them was totally different and each one of them was bad.”

He also couldn’t help but make things about himself, even when it came to slamming the NYT. “You the New York Times are an icon. I’m a New York icon, you’re a New York icon, and the only difference is, I still own my buildings.”

He also went over some of what he considers his greatest hits, bringing up what a smash hit he has been pretty much at all times.

“It might be hard for you to believe, but I do enjoy gatherings like these. They give me a chance to socialize with members of the opposition party. … Also great to see some Democrats here. … The opposition party, I’ve seen a few of them applauding tonight including Sen. Joe Manchin, who’s here.

Trump made an incredibly racist crack about Maxine Waters needing to take an IQ test tonight at the Gridiron and it has barely even registered a mention in coverage of the event. An appalling moment that I can’t believe isn’t everyone’s lead takeaway.

.@REPMAXINEWATERS on #Trump: This president has been called stupid, ignorant, and even his secretary of state did not deny that he called him a moron... I certainly expected him to come out with some racist remarks about me and by the way I’m told he wasn’t funny at all #AMJoypic.twitter.com/aoU5CXiEXv

“And don’t worry, Joe. … He’s a good man. There aren’t any cameras this time Joe. And I won’t tell Chuck and Nancy what you’re doing. Because boy was he applauding me the other night. Right? At the State of the Union he was up there applauding. I don’t know who the hell he was catering to.

“I thought my State of the Union address was actually extraordinary. One of the best ever given. In fact, Luis Gutierrez was so overcome with emotion at how good this particular speech was that he had to leave the chamber. He left and wept.

“I probably could have found a way to get the Democrats to stand and clap. … They didn’t. They were like frozen. I said black unemployment is at the lowest point in history. No emotion. They sat other than Manchin. He stood up. Thank you, Joe. He’s still paying the price for that. I said Hispanic unemployment is at the lowest level in history, record. There was no emotion. But I decided I wasn’t going to change anything. I wasn’t going to get them to stand. I didn’t know how. … I was not going to include a salute to Fidel Castro. They would have stood up. They would have cheered.”

We might also inquire of Stormy Daniels about Trump's mental state since she has observed him up close. I'm sure she could give us a revealing interpretation of her observations.