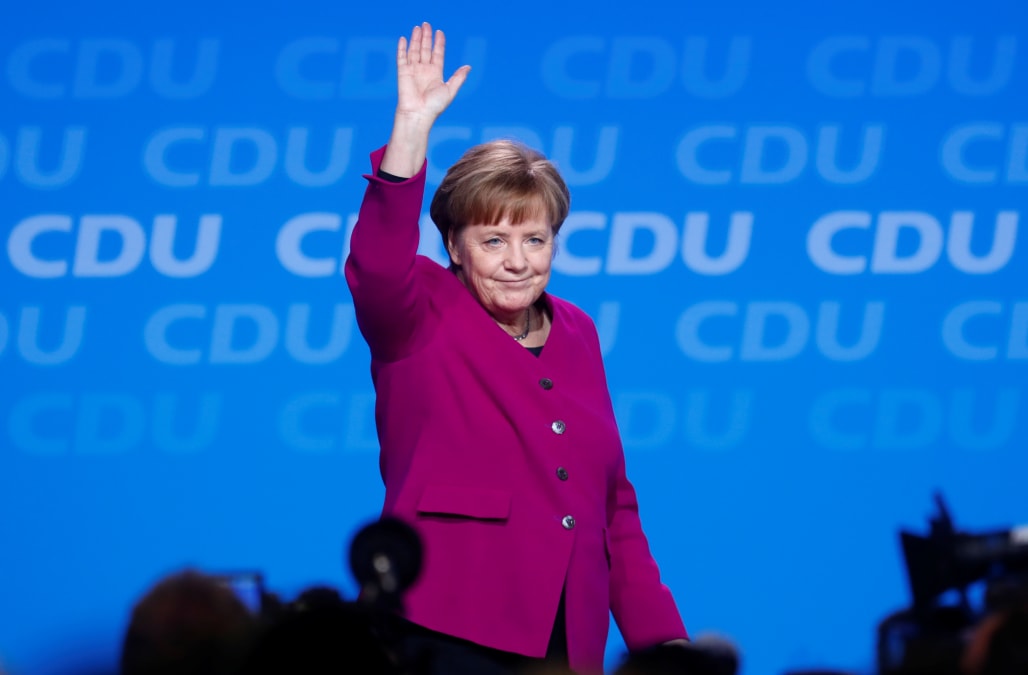 Two thirds of the membership voted "yes" to the deal, a party official said -- a wider margin than many had expected -- meaning Merkel could be sworn in for a fourth term by mid-March, in a repeat of the grand coalition that has governed since 2013.

The challenges are piling up for Merkel, who has been acting chancellor for more than five months since an inconclusive election, with Europe looking to its largest country for leadership on a host of economic and security issues.

Addressing party activists lining the balconies around the atrium of the party's Berlin headquarters early on Sunday, acting SPD leader Olaf Scholz said: "We now have clarity: the SPD will join the next German government."

Merkel took to her party's Twitter feed to congratulate the SPD. "I look forward to working with the SPD again for the good of our country," she said.

German Environment Minister Angela Merkel smiles prior to a environmental ministers conference at Albrechtsburg castle in Dresden, March 23. Ministers from 21 countries will attend the annual conference to discuss environmental issues.

Christian Democratic German Defence Minister Volker Ruehe (R) and Environment Minister Angela Merkel smile prior a cabinet meeting at the chancellery in Bonn, August 11. The cabinet is expected to discuss Merkels report about the security of nuclear power plants in Germany.

Angela MERKEL , CDU , Minister for the Environment , during a cabinet meeting in April 1994

Germany's Chancellor Angela Merkel holds a news conference at the end of a European Union leaders summit in Brussels March 15, 2013. European leaders met in Brussels for a second day of summit talks on Friday, to discuss relations with Russia and the situation in Syria, as well as economic policies.

German Chancellor Angela Merkel poses for photographs after the recording of her annual New Year's speech at the Chancellery in Berlin December 30, 2013.

German Chancellor Angela Merkel addresses a reception with carols singers (Sternsinger) at the Chancellery in Berlin, January 7, 2014. Merkel has fractured her pelvis in a cross-country skiing accident in Switzerland over the Christmas holidays and is walking with the help of crutches, forcing her to call off some foreign visits and official appointments her spokesman said on Monday.

German Chancellor Angela Merkel and President of Honduras Juan Orlando Hernandez shake hands after a joint press conference following talks at the Chancellery in Berlin on October 27, 2015. The two leaders are meeting for conversations about the bilateral relations, developmental cooperation and the situation in the region.

German Chancellor Angela Merkel wears Google Glass eyewear as she visits a booth of Nokia where students developed an interactive communication software to repair mobile communications equipment abroad during a Girls Day career event at the Chancellery in Berlin April 27, 2016. Girls Day seeks to attract female pupils to careers in IT, technological and natural science sectors of the German industry.

Angela Merkel, German chancellor, is seen arriving at a G-8 meeting in St-Petersburg, Russia, Sunday, July 16, 2006. Italy and the U.K. sent warships to the Eastern Mediterranean as a fifth day of fighting in the region prompted most of the Group of Eight countries to make plans for evacuating their citizens from Lebanon and Israel.

German Chancellor Angela Merkel (R) shakes hands with Japan's Prime Minister Shinzo Abe during an official welcoming ceremony at the Chancellery in Berlin 05 June 2007. Abe was in Berlin for bilateral takes with his German counterpart prior to the start of the G8 summit the following day.

Hohen-Luckow, GERMANY: German Chancellor Angela Merkel and US President George W. Bush pose with children of residents upon his arrival at Hohen Luckow Estate, northeastern Germany, 06 June 2007 prior their dinner on the first day of the summit of the Group of Eight most industrialized nations at the Baltic Coast hotel in the northern resort of Heiligendamm.

German Chancellor Angela Merkel (C) talks to geishas during her visit in Kyoto, 31 August 2007. Merkel is on a three-day official visit to Japan.

US President George W. Bush (L) and German Chancellor Angela Merkel (R) shake hands after a joint press conference at the guesthouse of the Federal Republic, the Meseberg Palace, in Meseberg north of Berlin, Germany on June 11, 2008. President Bush and German Chancellor Angela Merkel met for talks which were dominated by the Iranian nuclear programme, climate protection and transatlantic trade. Germany is the second stop on a farewell tour of Europe before Bush leaves office in January 2009.

German Chancellor Angela Merkel arrives for the weekly German government cabinet meeting on August 13, 2008 in Berlin, Germany. High on the morning's agenda was the extension of the German military mission in Sudan. The German Bundeswehr has approximately 40 soldiers in Sudan as part of the Untied Nations UNMIS peacekeeping force.

German Chancellor Angela Merkel (L) of the Christian Democratic Union (CDU) and Ronald Pofalla (R), General Secretary of the CDU smile during their election campaign rally at the central station Koblenz during their journey in the historic 'Rheingold' train on September 15, 2009 in Koblenz, Germany. German Chancellor Merkel tours during her election campaign rally through six German cities in the historic train. The 17th German federal election is scheduled for September 27, 2009 and will be held to elect the members of the Bundestag, the federal parliament of Germany.

Russian President Dmitry Medvedev arrives for talks with German Chancellor Angela Merkel at Meseberg Palace, the government's official residence, in the eastern German town of Meseberg on June 4, 2010. Medvedev is in Germany for two days of what the German government called 'informal' discussions set to be dominated by Iran's nuclear program and the Middle East.

German Chancellor Angela Merkel holds a speech during the ceremony marking the 60th anniversary of the German Federal Police (BKA) in Wiesbaden, August 18, 2011.

German Chancellor Angela Merkel gestures as she takes questions from the audience on foreign policy as the Koerber foundation marked the 50th anniversary of the Bergedorfer forum, a German think-tank in Berlin September 9, 2011.

German Chancellor Angela Merkel, French President Francois Hollande and Paris Mayor Anne Hidalgo pay their respects to the victims of the November 13 Paris attacks on November 25, 2015, on the Place de la Republic in Paris, where they each left a white rose. Hollande, just off the plane from Washington, met German Chancellor Angela Merkel, seeking support for his faltering effort to forge a coalition to fight Islamic State jihadists. Hollande is expected to look to Merkel to try to ease tensions between Russia and Turkey -- two potential components of the anti-IS alliance -- which fell out over the downing of a Russian warplane at the Turkish-Syrian border. Hollande is on a whirlwind diplomatic tour spurred by the November 13 attacks on Paris that left 130 dead and 350 injured.

US President Barack Obama and German Chancellor Angela Merkel arrive for a press conference after their bilateral talks at the Herrenhausen Palace in Hanover, on April 24, 2016. Obama is in Germany on the last leg of his tour of Europe and the Gulf, planning to underscore close ties with Chancellor Angela Merkel and make the case for a controversial transatlantic free trade agreement

Angela Merkel, Germany's chancellor and leader of the Christian Democratic Union (CDU) party, reacts during a news conference at the CDU headquarters in Berlin, Germany, on Monday, March 14, 2016. Merkel plans to stay the course and pursue her migration policy much as before even as she acknowledged that the refugee crisis hurt her party in three state elections.

German Chancellor Angela Merkel (L) talks with Jerome Boateng (R) during the annual open-house day at the Chancellery on August 28, 2016 in Berlin, Germany. Merkel has seen her popularity ratings decline as Germany grapples with the integration of up to one million refugees and migrants who arrived in Germany thanks to Merkel's liberal policy. Many Germans feel unsettled by so many newcomers and only a small portion of those granted asylum have found jobs. Germany faces federal elections next year.

German Chancellor Angela Merkel and Sarah Philips during a reception of German carnival societies at the Chancellery in Berlin, Germany, January 23, 2017.

German Chancellor Angela Merkel looks at a combat diver during her visit to Naval Base Command in Kiel, Germany, January 19, 2016.

European Commissioner for Economic and Financial Affairs Pierre Moscovici congratulated the SPD for "their responsible and decisive vote" on Twitter and said Germany was now "ready to engage for a stronger Europe."

French Finance Minister Bruno Le Maire wrote on Twitter that he had spoken to Scholz and acting finance minister Peter Altmaier, a Merkel ally, by telephone on Sunday morning to discuss giving the euro zone new impetus after the SPD's vote, adding: "Resolved to work closely together!"

The SPD ballot pitted the leadership of the center-left party against the radical youth wing, which wanted the SPD to rebuild in opposition after a disastrous election showing.

"I'm happy it worked out this way," Andrea Nahles, the SPD's likely next leader, told Reuters.

Scholz declined to comment on reports that he would be finance minister, saying only that the SPD would appoint three men and three women to the federal cabinet. As part of the price for its support, the SPD will take the helm at key ministries, including the finance ministry.

The outcome means the far-right Alternative for Germany (AfD) will be the largest parliamentary opposition party. In a tweet, they labeled the SPD's decision a "catastrophe" for Germany, promising fierce opposition over the coming four years.

Kevin Kuehnert, head of the SPD's youth wing, said he was disappointed but that the "Jusos" (youth wing) would keep up their criticism, signaling that, after bringing in a flood of new members, they would be a thorn in the leadership's side.

The party, already one of Europe's largest, has seen tens of thousands of new members join this year. Turn-out in the poll was over 78 percent.

German business greeted with relief the news that Germany would get a government after its longest-ever post-election interregnum.

"While the United States are starting a trade war and China is challenge our industrial leadership, we have been unnecessarily self-absorbed," engineering trade union VDMA's managing director Thilo Brodtmann said.

The SPD was forced to revisit its original plan to go into opposition after the failure of Merkel's initial attempt to form a coalition with two smaller parties.

With her conservatives, they thrashed out a coalition agreement which SPD leaders hailed for its commitments to strengthening the EU and giving them key government roles. (Additional reporting by Andrea Shalal, Maria Sheahan and Holger Hansen in Berlin and Francesco Guarascio in Brussels Editing by Andrew Heavens and Keith Weir)