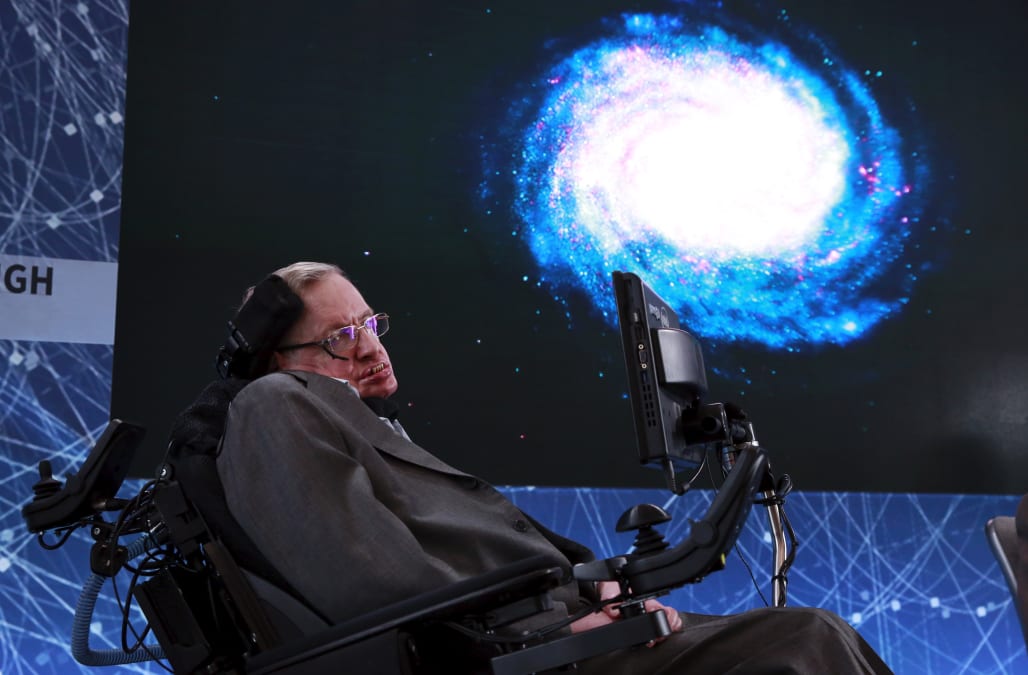 Neil deGrasse Tyson asks him to weigh in.

Neil deGrasse Tyson’s show Star Talk is ending its fourth season with a bang—a big one. The big one, to be precise. The show, filmed at the American Museum of Natural History in New York City, features famous astrophysicist Tyson interviewing famous-for-things-other-than-physics folks through the lens of science. For this Sunday’s season finale, Tyson’s guest is arguably the only physicist more famous than he: Stephen Hawking.

In this exclusive clip, Tyson asks Hawking your standard softball interview question: what was around before the big bang? In other words, what happened before the moment the universe began? Check out Hawking’s answer:

“The boundary condition of the universe...is that it has no boundary,” Hawking says.

Basically, Hawking’s favorite answer to this question is that there kind of isn't any such thing as a time before the big bang. Time smooths out as you get closer and closer to the big bang, such that it never actually narrows down into a starting point. In the words of another famous master of time and space, it's just a big ball of wibbly-wobbly, timey-wimey... stuff.

If you’re colossally, cosmologically confused, I’ve got great news for you: in a recent issue of our print magazine (which, yes, still exists and yes, is still great, and yes, you should subscribe to) I co-wrote a piece on this exact, mind-trippy topic with physicist Matthew R. Francis. We described this theory thusly:

Some variations on the big bang go down a little smoother than the original. In the simplest version, the beginning of time is a sharp point, where everything we currently observe was mashed into a ball of energy smaller than an atom—then burst outward, duh. But what came before? Physicists such as Stephen Hawking tried to restore a kind of timelessness by getting rid of that starting point, imagining a universe with no clear “bang.” You can wind back the clock to the edges of those first moments of existence, but asking what came before would be like asking why you can keep walking north when you get to the North Pole. Time, as we define it, loses its meaning as the universe shrinks down.

It never quite narrows to a single point. But no one has proved physics works like that—yet.

Also, we had an artist draw it like this:

We also featured four other ideas. It turns out a lot of scientists are super flummoxed about the question of what came before the big bang, and they've come up with a whole bunch of answers. You can read more about the perplexing infancy of our universe here. And you can find out more about Hawking’s thoughts on the subject Sunday at 11:00 p.m. Eastern on the National Geographic Channel.

More from Popular Science:
Venus may once have been habitable. Now it can tell us if other worlds might be as well.
The flu season isn't over yet, but the FDA is already working on next year's vaccine
It's 2018 and black lung disease seems to be on the rise