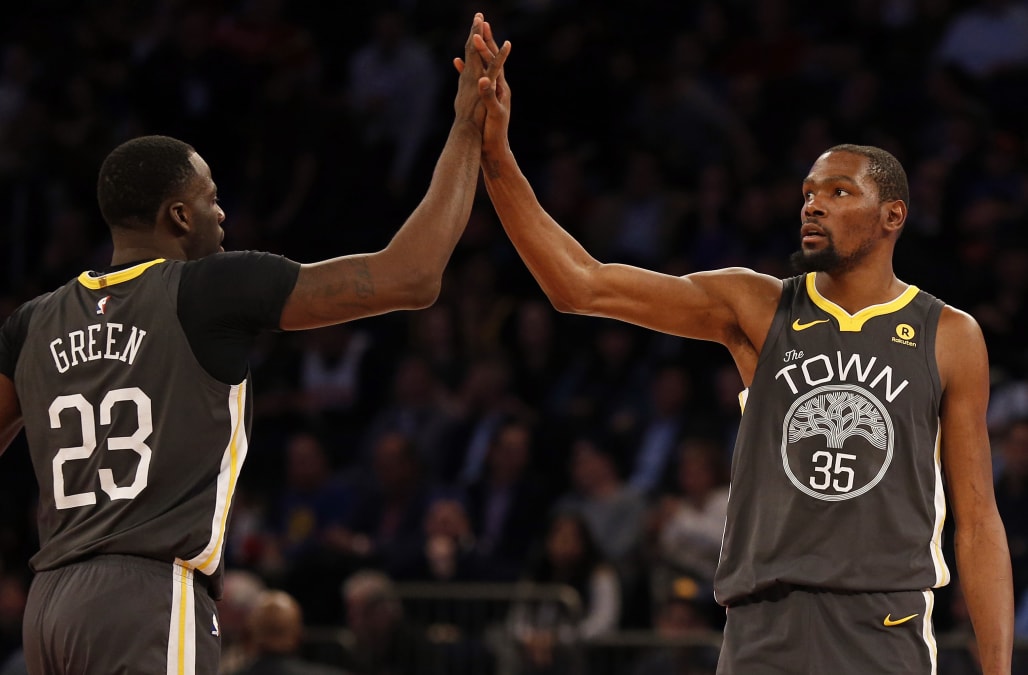 The Golden State Warriors haven’t made many friends in the White House, but at least they have one friend in congress.

Sen. John Thune (R-SD) commended the Warriors for using their day off in D.C. ahead of Wednesday’s game against the Wizards to tour the National Museum of African American History and Culture with a group of students.

Donald Trump previously revoked the reigning champions’ White House invitation after Stephen Curry publicly said he was unlikely to attend. Instead, the team spent their extra day in D.C. meeting with students from Durant's hometown of Seat Pleasant, Maryland, which is 8 miles from the White House.

“I just think that they are a bunch of athletes who see themselves also serving the greater cause and I'm glad that they're willing to do that,” Thune told TMZ Sports on Wednesday. “They're willing to help people who are less fortunate than they are and maybe haven't had the breaks in life that they've had.”

Republican Senator John Thune
Senator John Thune (R-SD) speaks during a press conference on Capitol Hill in Washington, U.S., September 12, 2017. REUTERS/Joshua Roberts
U.S. Senator John Cornyn (R-TX), Senator John Thune (R-SD) and Senator Pat Toomey (R-PA) speak to reporters after meeting with President Trump about their planned changes in the U.S. tax code, at the White House in Washington, U.S. October 18, 2017. REUTERS/Jonathan Ernst
Senator John Thune (R-SD) questions Alex Azar II as he testifies before the Senate Finance Committee on his nomination to be Health and Human Services secretary in Washington, U.S., January 9, 2018. REUTERS/Joshua Roberts
U.S. Senator John Thune addresses the media during the 2017 "Congress of Tomorrow" Joint Republican Issues Conference in Philadelphia, Pennsylvania, U.S. January 25, 2017. REUTERS/Mark Makela
Senator John Thune, a Republican from South Dakota and chairman of the Senate Commerce, Science and Transportation Committee, listens during a confirmation hearing with Federal Trade Commission (FTC) nominees in Washington, D.C., U.S., on Wednesday, Feb. 14, 2018. The FTC, which investigates mergers and consumer-protection cases, has been operating with three empty seats on its five-member commission. Photographer: Andrew Harrer/Bloomberg via Getty Images
WASHINGTON, DC - JANUARY 19: Sen. John Thune (R-SD) speaks with reporters at the U.S. Capitol January 19, 2018 in Washington, DC. A continuing resolution to fund the government has passed the House of Representatives but faces a stiff challenge in the Senate. (Photo by Aaron P. Bernstein/Getty Images)
WASHINGTON, DC - JANUARY 17: US Senator John Thune (R-SD) Chairman of Senate Committee on Commerce, Science and Transportation during a Senate hearing on monitoring extremist content online on capital hill on January 17, 2018 in Washington, DC. (Photo by Tasos Katopodis/Getty Images)
WHITE SULPHUR SPRINGS, WV - FEBRUARY 01: U.S. Senate Republican Conference Chairman Sen. John Thune (R-SD) (R) and House Republican Conference Chair Rep. Cathy McMorris Rodgers (R-WA) (L) hold a news briefing during the 2018 House & Senate Republican Member Conference February 1, 2018 at the Greenbrier resort in White Sulphur Springs, West Virginia. Congressional Republicans gather at their annual retreat, hosted by the Congressional Institute, to discuss legislative agenda for the year. (Photo by Alex Wong/Getty Images)
Senator John Thune, a Republican from South Dakota, walks out of the White House to speak to the media after a Senate Finance Committee meeting with U.S. President Donald Trump in Washington, D.C., U.S., on Wednesday, Oct. 18, 2017. Senate Democrats are likely to force a floor vote this week on whether a tax bill could repeal the state and local tax deduction, a divisive piece of the tax framework that Trump and GOP leaders have proposed. Photographer: Andrew Harrer/Bloomberg via Getty Images
Senator John Thune, a Republican from South Dakota, speaks to members of the media in the basement of the U.S. Capitol before a Republican policy meeting luncheon in Washington, D.C., U.S., on Tuesday, Sept. 26, 2017. Senate Republicans gave up on their last-ditch proposal to repeal Obamacare today as opposition in their own ranks ended months of fruitless efforts to gut the Affordable Care Act. Photographer: Andrew Harrer/Bloomberg via Getty Images
Up Next

The Warriors spent Tuesday at the museum with 40 students from Seat Pleasant and 10 more from the Tragedy Assistance Program for Survivors, which helps children who have lost loved ones that served in the military. The private museum tour lasted three hours.

Curry said that going to the National Museum of African American History and Culture, which opened in 2016, offered the Warriors a better use of their time than meeting with a president whose policies they disagree with.

"Rhetoric and hate and just general disdain from the top, trying to be divisive and whatnot, has had the opposite reaction from what it intended," Curry said. "We've done our part, I think, to try to further that message."

In addition to the Warriors' tour, Kevin Durant also traveled to nearby Suitland High School in Prince George’s County, Maryland, to officially announce the Kevin Durant Charity Foundation’s $10 million commitment and partnership to launch the College Track, a program that guides students through high school and college.

“It was a dream come true,” Durant said about launching the program, per The Undefeated. “I’ve met some amazing people over the last year or so to help my dream become a reality. I can’t thank them enough for giving me this opportunity.”