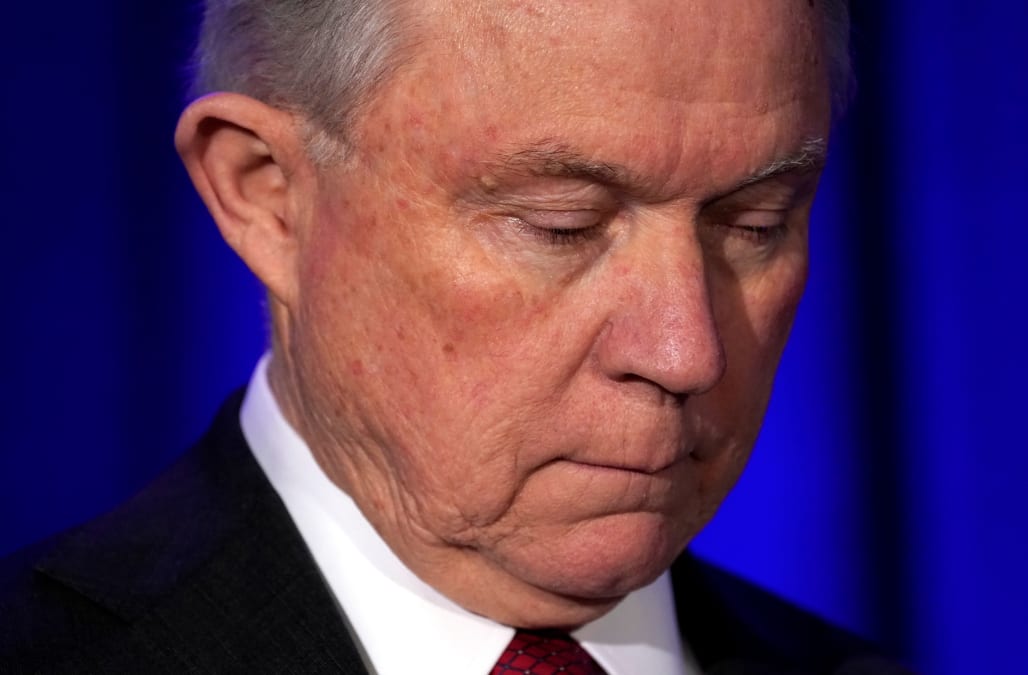 Sessions fired back at Trump hours later in a written statement defending his decision to refer the issue to Justice Department Inspector General Michael Horowitz and pledging to "discharge my duties with integrity and honor."

The exchange reignited long-simmering tensions between the president and the nation's top law enforcement officer rooted in Sessions' recusal from his department's investigation into alleged Russian meddling in the 2016 presidential election.

Key Republican lawmakers also balked at the president's latest breach of the principle that holds that the Justice Department and the judiciary should be independent of the White House.

Trump lashed out against Sessions on Twitter for assigning the probe of alleged government surveillance abuse to Horowitz and not to prosecutors.

"Why is A.G. Sessions asking the Inspector General to investigate massive FISA abuse," Trump wrote, referring to the Foreign Intelligence Surveillance Act, which regulates government monitoring of the communications of suspected foreign agents.

"Will take forever, has no prosecutorial power and already late with reports on Comey, etc.," Trump continued. "Isn't the IG an Obama guy? Why not use Justice Department lawyers? Disgraceful."

Why is A.G. Jeff Sessions asking the Inspector General to investigate potentially massive FISA abuse. Will take forever, has no prosecutorial power and already late with reports on Comey etc. Isn’t the I.G. an Obama guy? Why not use Justice Department lawyers? DISGRACEFUL!

Horowitz was sworn into his post in April 2012, during the Obama administration.

Trump's tweet appeared to reveal a lack of understanding of the function of Horowitz's office, which serves as an independent watchdog responsible for investigating misconduct by Justice Department employees. It can refer any wrongdoing it uncovers to prosecutors.

In his statement, Sessions called the referral to Horowitz "the appropriate process that will ensure complaints against this department will be fully and fairly acted upon if necessary."

"As long as I am the attorney general, I will continue to discharge my duties with integrity and honor, and this department will continue to do its work in a fair and impartial manner according to the law and Constitution," he said.

Sessions' statement was the strongest defense he has mounted to repeated attacks from Trump, who most notably has criticized Sessions for recusing himself from the Justice Department's Russia investigation.

His recusal paved the way for the appointment of Special Counsel Robert Mueller, who has filed a flurry of criminal charges against a slew of former Trump campaign aides and advisers and Russians accused of trying to slew the 2016 election to Trump.

Trump has violated the principle of preserving judicial and prosecutorial independence numerous times, for example by promising to have his 2016 presidential opponent Hillary Clinton investigated and criticizing court decisions on his immigration policy.

"Not to incur the president’s wrath, but I wouldn’t do that. Jeff Sessions is loyal to the president," King told Fox News.

Trey Gowdy, the Republican chairman of the House Oversight and Government Reform Committee, defended Sessions' decision to refer the matter to Horowitz.

Horowitz "has been fair, fact-centric and appropriately confidential with his work," Gowdy said in a statement. "I have complete confidence in him."

Trump has repeatedly denied there was any collusion and Russia has said it did not meddle in the election, contradicting the assessment of senior U.S. security officials.