Top GOP congressman: 'How many Jews were put in the ovens because they were unarmed?' 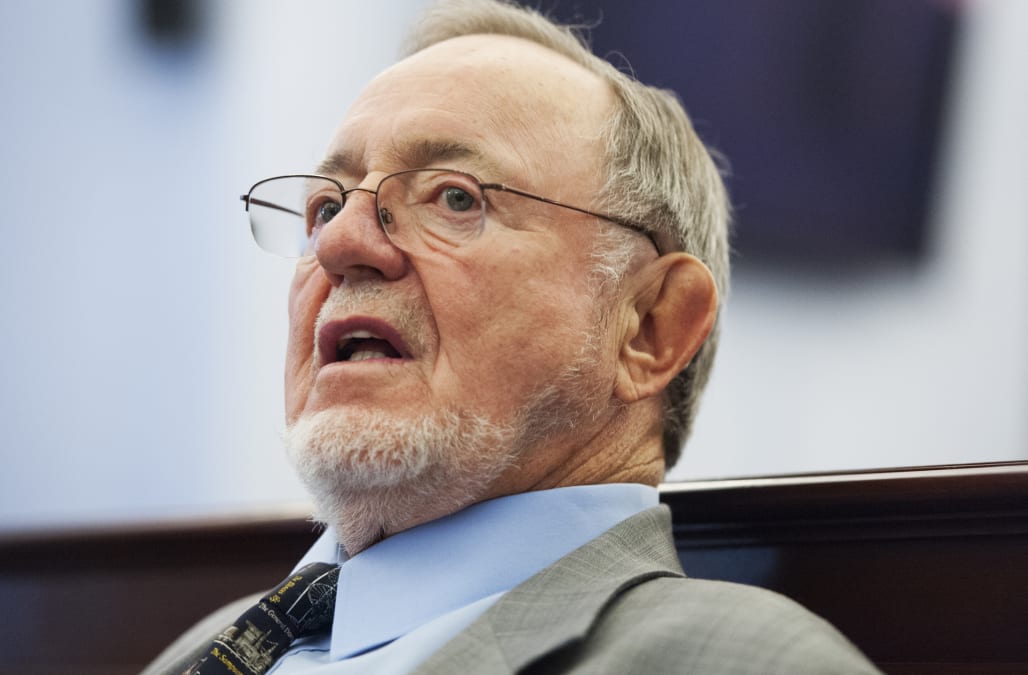 Republican Rep. Don Young of Alaska suggested that looser gun laws could have saved Jews during the Holocaust.

During a recent town hall event in Juneau, Alaska, Young was asked by Dimitri Shein, who is running as a Democrat in opposition to Young, what he thought of school safety.

In response, Young questioned how many people could have been saved in Germany during the Holocaust and the Russia under Joseph Stalin if guns were allowed.

The argument that gun control was a potential factor in the breadth of the Holocaust is not a new one: Department of Housing and Urban Development Secretary Ben Carson and other politicians have suggested the connection in the past, But the Anti-Defamation League has consistently rejected the idea that gun control played a factor.

"The small number of personal firearms in the hands of the small number of Germany’s Jews (about 214,000) remaining in Germany in 1938 could in no way have stopped the totalitarian power of the Nazi German state," the ADL said in 2013. "When they had weapons, Jews could symbolically resist, as they did in the 1943 Warsaw Ghetto Uprising and elsewhere, but could not stop the Nazi genocide machine."

Young is the dean of the House, a title given to the longest continuously serving member, and a long-time opponent of gun control measures. The Alaska Republican also pinned some of the recent school shootings on video games and other media.

"Let's go back to what we've done with video games," Young said. "Have any of you seen some of those video games? Have you watched what they're watching? It is the worst I've ever seen, violence beyond anyone's imagination."

Young also said that he supports President Donald Trump's suggestion to arm teachers as a way to stop shootings.

Teachers say #ArmMeWith classroom resources instead of guns
R E A L • W O R L D • S O L U T I O N S • my friend @thesuperheroteacher and I think that we should find more practical solutions than giving teachers guns. I hope you’ll take the same stance and read the explanation on my stories as to why. Join us. #armmewith
#armmewith the resources and funding needed to help students experiencing mental health issues, NOT guns. Teachers, now (more than ever) is the time to take and stand and say we will not accept another one of our students being lost to another senseless school shooting. We have to strive for MORE. Our students deserve it. Call, write, march... do whatever you can to show enough is enough— we NEED stronger gun laws, we NEED funding for mental health issues, we NEED our students to L I V E so they can change the future of this country. #resist #standup #guncontrol #enoughisenough #notonemore #gunsafety #schoolsafety #mentalhealth #teachertribe #iteachtoo #teachersmatter
We cannot afford to ignore the truth about what is happening in our country. What is truly frightening is the number of people who refuse to make decisions based upon facts. It is a fact that families sent their loved ones to school and now they are planning funerals. It is a fact that futures were ended when they were just beginning. It is a fact that too many students have lost their lives in a space where they are supposed to be educated and protected. It is a fact that too many people in power are not using that power to bring about the necessary changes that could prevent things like this from happening. Far too many bullets claim our students in the streets for them to claim our students in school, too. We don’t need rhetoric when reality is working overtime. #ArmMeWith the truth, the whole truth, and nothing but the truth. • • • • • #education #teacher #teachers #teachersofinstagram #teachersfollowteachers #iteachtoo #teacherspayteachers #tpt #englishteacher #highschool #blackteachersrock #blackboyjoy #thedapperteacher #blackhistorymonth #blackhistory #armmewith
#Armmewith is a movement by @thesuperheroteacher and @missbertels_ and I invite you to join in! Skip through my pics and post your own (I’ve included a blank template) or go to goo.go/52XggF to print your own out! . . . The Arm Me With movement is to make our leaders aware of what teachers really need in the classroom. As some of you know, I’m a gun owner and I can shoot a gun, but I do not believe guns belong anywhere near a classroom. Teachers have enough burdens and the classroom is an unpredictable place. Also teachers are outnumbered by kids 30:1 oftentimes. Guns are not the solution here, and I think they’d be catastrophic. Please flip through my ideal solutions and feel free to use the blank picture to create your own solution! . . . . . . #armwithme #schoolsafetynow #educatorsagainstgunviolence #teachersofinstagram #teachersfollowteachers
#armmewith ample time to build relationships, so that every kid knows that they matter, are loved, and have a place on this 🌏
The day teachers are asked to carry guns in the classroom is the day I leave my dream job I’ve had since I was 16 y… https://t.co/meM7oakYRN
Spread the word #ArmMeWith https://t.co/JSg6RboXeb
This is a movement that I can 100% get on board with. If you’ve heard me talk about my class size the last couple years, you will not be surprised that this is one of my hot button issues. In the mind of children, negative attention is still attention, and I believe that as we raise class sizes, overload teachers, and cut support, we will continue to see major behavioral, social, and emotional issues rise to unparalleled levels. I think that reaching out to educators about ways that we can be PROactive, not reactive, in the education world to reduce violence of any kind is absolutely one of the best places to start making a change! . . . . . #ArmMeWith #RealTalk #IssuesInEducation #iTeach2nd #iTeach3rd #TeacherLife #TeachersOfInstagram #TeacherCommunity #TargetTeachers
Thank you to @thesuperheroteacher for starting this movement. #enoughisenough #notonemore #armmewith #teachertribe #teachersfollowteachers #teachersofyoutube #teachersofinstagram
It isn’t enough to teach our children how to read. They need to learn how to deal with the complex emotions facing… https://t.co/v9lnWYYOHn
Teachers want to be heard. ✊ Comment your #ARMMEWITH below!
Can we just all agree that SEL and character education are just as important, if not more, as teaching our core content subjects? Teaching our students to be genuinely GOOD, CARING PEOPLE is the most important thing we can teach them. #armmewith #jointhemovement
Schools need resources. We need counselors and better training with mental health. Children need to have help the moment they need it and not when it's too late. If we help early enough you will never have to get to the too late scenario. So, #armmewith resources and funding to strengthen the mental health of the students and the adults that care for them. Join the movement! Thanks for the pretty image @caffeinatedandcreative ❤️❤️
Up Next

You can watch Young's remarks here:

SEE ALSO: The fight between Georgia Republicans and Delta Air Lines over the NRA could be a disaster for Atlanta's bid for Amazon's HQ2