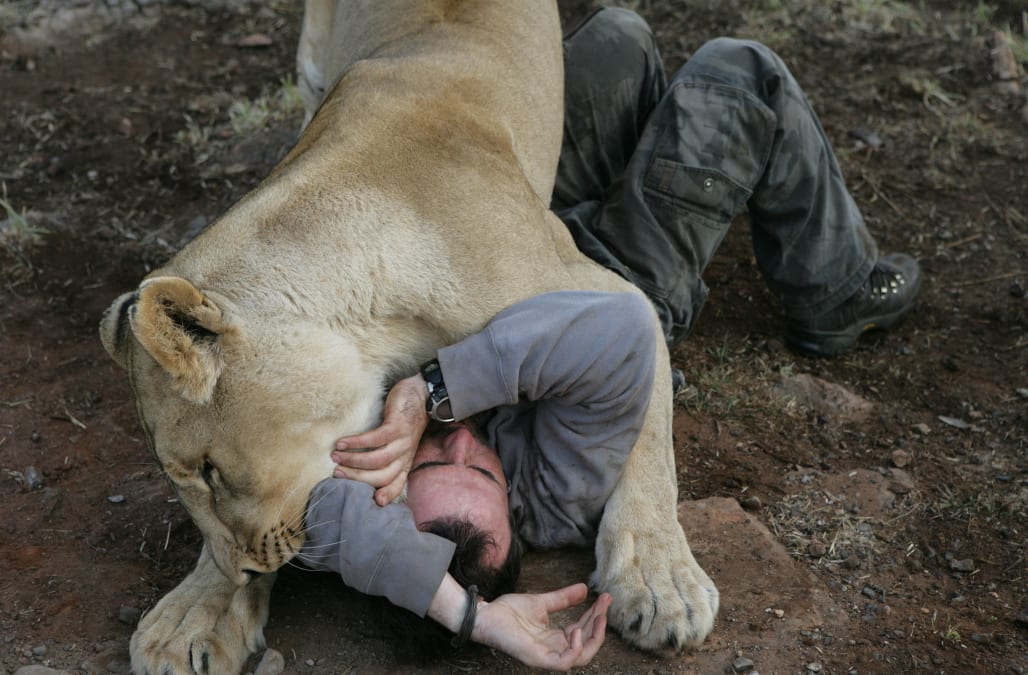 A lioness under the care of a noted "lion whisperer" in South Africa mauled a 22-year-old woman to death on Tuesday.

Kevin Richardson said on Facebook that he and an "experienced" colleague took three lions for a walk in the Dinokeng Game Reserve when one went after an impala. The lion found the woman a little more than a mile away, he said.

"We assessed the landscape for other big 5 animals and as per procedure sent out a notification that we were walking in the reserve," Richardson wrote in a Facebook post on Wednesday. "One of the lionesses charged off after an Impala and must have run 2,0 to 2,5 km (1.2 to 1.5 miles) where she encountered the 22-year-old outside the car."

The "big 5" animals is a designation that includes rhino, elephant, buffalo, leopard and lion.

The woman died at a tented camp run by Richardson. She had joined a friend who went to the camp for a "school project," according to spokeswoman Constable Connie Moganedi.

RELATED: A look at the lion whisperer

Lion whisperer gets interrupted
Up Next

"When they were about to leave, the lioness attacked the young lady," Moganedi said.

Richardson wrote on Facebook that the woman "was not a guest at the camp, but had accompanied her friend to conduct an interview for an assignment with the camp's manager." The two visitors were taking photographs outside the camp when the attack took place, he said.

He added that he was "devastated" by the tragedy.

A police investigation is underway. The victim's family is "traumatized," said Moganedi.

The management of the reserve said the woman was killed "within a conservation section that is not accessible to the general public," but lies within the reserve's boundaries.

"The lion that was involved with this fatality was not one of the wild free-roaming lions of the Dinokeng Game Reserve," the management said.

Richardson's website notes that the "intimate glam camp" with five tents is an hour's drive from Johannesburg's main international airport.

He said last year he does not breed lions and that those on his 3,200-acre property feed on donated carcasses of cattle and antelope.

Richardson campaigns against the South African industry in which customers kill captive-bred lions, and told the Associated Press that many of the lions in his care were rescued from being taken to facilities where what critics call "canned hunting" took place.

"I have been accepted as part of the pride," he said. "But I have to be very careful. They are large animals and are very good at telling you how they feel."