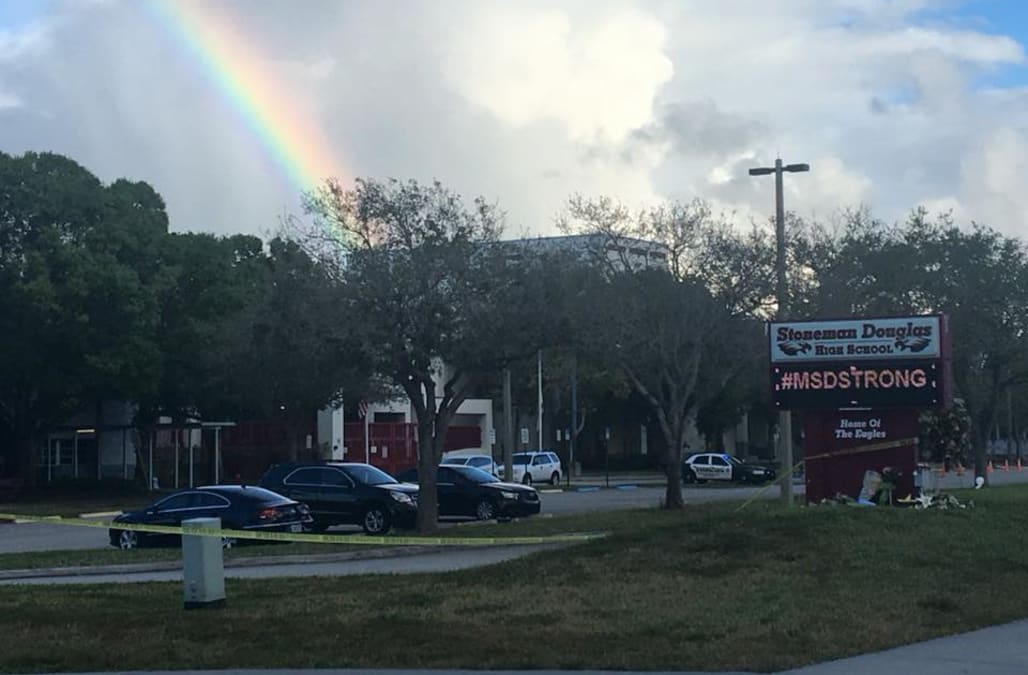 Teachers reporting back to work at Marjory Stoneman Douglas High School on Monday for the first time since the deadly Feb. 14 mass shooting were greeted by a remarkable sight.

A rainbow appeared in the sky over the Parkland, Florida, high school as faculty members returned to the site of the tragedy to prepare for the official reopening on Wednesday.

WTVJ reporter Darryl Forges shared a photo of the stunning occurrence on Facebook.

Students walked through the halls where 17 of their classmates and teachers were gunned down in order to collect their backpacks and other belongings that they left behind while fleeing the massacre.

Tears were shed and hugs were exchanged during the difficult return, with multiple students sporting T-shirts that read "Douglas Strong" and "Parkland United," according to the New York Times.

The gathering on Sunday was the beginning of a "phased reopening" of the school, according to Broward County officials.

Monday begins a two-day planning period for teachers and staff members ahead of students making their official return to the school on Wednesday for a modified schedule.

Therapy dogs offer help after the Florida shooting
PARKLAND, FL. - February 15: One day after the deadly shooting at Marjorie Stonemason Douglas High School in Parkland, Florida that left 17 dead and 14 injured, people gather for a memorial at Parkridge Church, on February 15, 2018 in Parkland, Florida. A group of children gather around a therapy dog at the vigil. (Carolyn Cole/Los Angeles Times via Getty Images)
PARKLAND, FL - FEBRUARY 16: Two women hug while surrounded by comfort dogs at a memorial site to honor victims of the mass shooting at Marjory Stoneman Douglas High School, at Pine Trail Park on February 16, 2018 in Parkland, Florida. Police arrested 19-year-old former student Nikolas Cruz for killing 17 people at the high school. (Photo by Mark Wilson/Getty Images)
Jacob Comfort Dog visiting with Matt, a teacher at Marjory Stoneman Douglas High School. Please continue to pray for this community and if you are moved, help with travel expenses for the LCC K-9 Comfort Dogs by visiting the link in our profile. #k9comfortdogs #marjorystonemandouglas #stonemandouglas #florida #travel #traveling #travelgram #dogs #goldenretriever #dogsofinstagram #dogstagram #puppy #puppies #instapic #instagram
This is Jacob, he’s a “comfort dog” whose been to Las Vegas, Orlando and now Parkland to comfort victims of mass sh… https://t.co/a4pRIkffmm
Emergency Appeal: LCC K-9 Comfort Dogs Deploy to Marjory Stoneman Douglas High School - Parkland, Florida in Response to Mass Shooting - If you are moved to help with travel expenses, please visit the link in our profile. #parkland #marjorystonemandouglas #florida #dogs #dogsofinstagram #dogstagram #travel #traveling #travelgram #goldenretriever #animals #love #comfort
Want to know where the closest @lccharities @comfortdogs is to you? Visit http://onelink.to/tf87b9 on iPhone/Android today to download the LCC Now App and you’ll get access to maps, eBooks, exclusive videos, and more! #app #map #dogsofinstagram #puppy #goldenretriever #dogstagram
Humane Society of Broward County Animal Assisted Therapy dogs arrive at Marjory Stoneman Douglas High School on Sunday, February 25, 2018, for an open house as parents and students returned to the school for the first time since 17 people were killed in a mass shooting at the school in Parkland on February 14, 2018. (David Santiago/Miami Herald/TNS via Getty Images)
Up Next