NFL combine preview: What all four top QBs need to do in Indianapolis 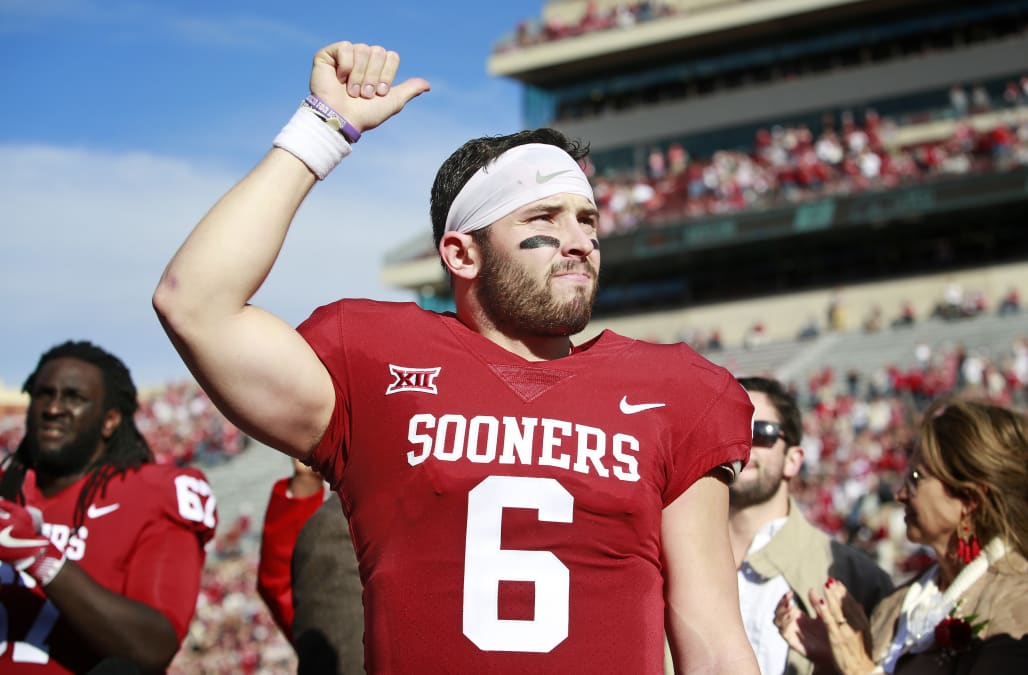 When we look back at the first round of the 2018 NFL draft, we’ll probably be laughing at some of the misses at quarterback. Because we already have a good idea why those quarterbacks will fail.

There will be some nervous times for teams near the top of the draft. It’s a good bet not all four of the quarterbacks will become top-end starters, because the percentage of first-round quarterbacks who succeed is far from 100 percent. Because they’re bunched closely together, you might end up being mocked as the executive who passed on Darnold because of a mechanical issue or Mayfield because of his height as they become NFL stars. And it’s not even out of the realm of possibility that Louisville’s Lamar Jackson ends up as a better pick than all four quarterbacks already mentioned. Jackson will be a big deal at the combine, too.

There are many things outside of quarterbacks to be sorted out at the combine this week. Teams will be looking at hundreds of prospects trying to find some that intrigue them. Business between teams and agents, such as the Saints trying to finalize a Drew Brees contract, will happen too. But there will be a close eye on the big-name quarterbacks as they try to separate themselves. Among the group of top quarterbacks, here’s the potential fatal flaw for each one and what he can do to fix it as the combine begins on Tuesday:

4 PHOTOS
The top quarterbacks at the NFL combine
See Gallery

The top quarterbacks at the NFL combine

The all-Mountain West first team quarterback last season was Colorado State’s Nick Stevens. The second-team quarterback was Brett Rypien of Boise State. Allen was one of three quarterbacks to get honorable mention.

College production doesn’t necessarily matter. But if you’re an NFL team looking to spend a top 10 (Top five? First overall pick?) on Allen, it’s a little frightening he didn’t dominate a non-power five conference. Allen’s biggest issue in college, perhaps other than his supporting cast, was his accuracy. He completed only 56 percent of his passes in 2016 and 56.3 percent in 2017. Inaccurate passers in college usually don’t find accuracy in the NFL.

But NFL teams are still smitten with Allen’s physical package of size, athleticism and arm strength. Allen won’t change the accuracy questions throwing in shorts at Indianapolis, but he needs to play to his strengths. He probably can’t drop to his knees and throw a ball 50 yards during his combine workout, but if he shows NFL teams he still has better physical tools than the other three top quarterbacks, he’ll stay in the conversation to be the first quarterback picked.

Darnold’s 22 turnovers last season tied for the most in FBS. Darnold lost nine fumbles and had 13 interceptions. In the final game of his college career, he turned it over three times in a 24-7 loss to Ohio State.

A year ago Darnold was supposed to be the no-doubt first pick of this draft, but his 2017 season was underwhelming. Mechanics are an issue, and that doesn’t help with the turnover issue. He has a bit of a looping throwing motion. Maybe that can be fixed, and maybe it can’t. It’s not impossible to overcome a slow release, but it’s not ideal to give NFL cornerbacks and safeties a head start with a long throwing motion. Darnold has said he plans to throw at the combine, and any improvements to his motion would be a plus. His athleticism will surely stand out. Teams will have to figure out if the turnovers are fixable.

Presumably, Mayfield hasn’t grown any taller since the Senior Bowl, when he measured under 6-foot-1. It’s a good bet that alone eliminates Mayfield from consideration for some teams. Drew Brees and Russell Wilson have broken some barriers for short quarterbacks, but there’s a reason some teams have size requirements at the position.

Mayfield can’t do anything about his stature, but he will need to interview well at the combine. The Heisman Trophy winner’s ability is unquestioned. He’s a deadly accurate passer, athletic, amazingly productive and by all accounts a leader who teammates rally around. But he does have questions about his maturity. Johnny Manziel comparisons seem unfair, but there were enough moments in college that NFL teams will want to find out if he’ll be an issue off the field. He can’t change questions about his height, and his workouts in Indianapolis will be important too, but answering any off-field questions might help him most.

Between now and the draft, you’ll hear a lot about how polished Rosen is as a passer. He has great mechanics. You’ll also hear plenty about his maturity.

From Charles Robinson’s report late last season after talking to evaluators, Rosen can come off as arrogant, and his leadership isn’t where it needs to be yet. There are some football questions, such as him forcing throws, and he doesn’t have a clean health history. He missed time in 2016 with a shoulder injury and a second concussion last season caused him to miss UCLA’s bowl game. But it seems Rosen’s attitude and maturity might be his biggest issue.

What evaluators will see when Rosen throws at the combine (which he is expected to do) is a very advanced passer. That part doesn’t seem to be in doubt. They’ll see a potential Week 1 starter, but like Mayfield, how Rosen does in interviews could determine where he goes among the fascinating quartet of top quarterbacks.