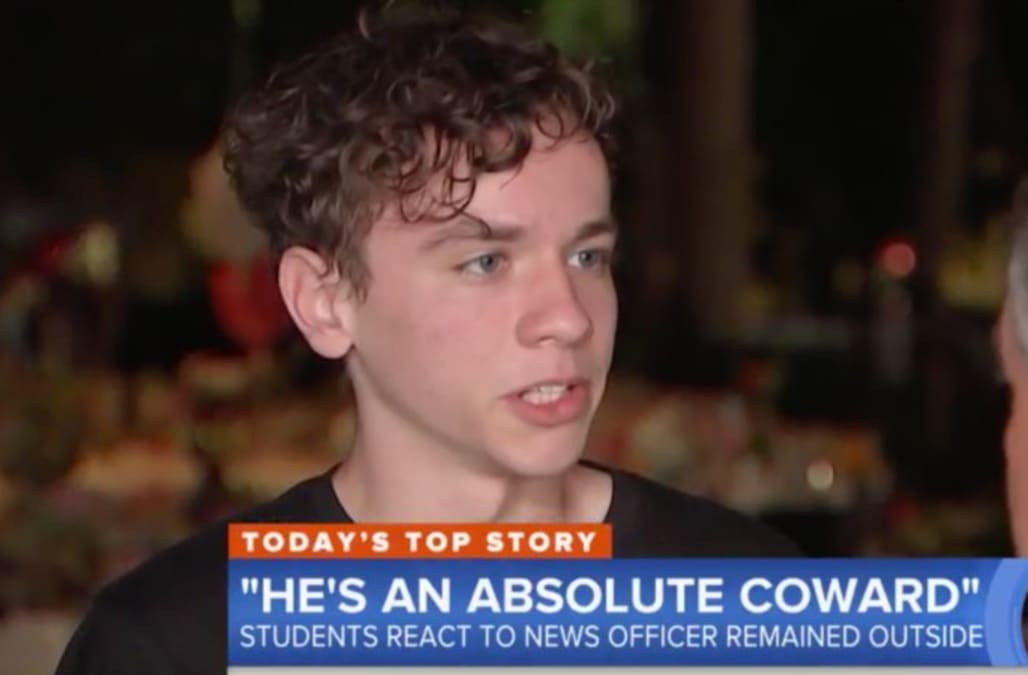 Some of the students who survived last week's mass shooting in Florida say they're furious at the armed school resource officer who stayed outside during the massacre and never confronted the gunman.

"I'm so mad right now," another survivor, Morgan Williams, said on Twitter. "The reason he is on our campus is to protest [sic] us. He had the ability to save lives and keep one of my best friends out of the hospital. YET HE DID NOTHING."

The deputy, Scot Peterson, did "nothing" while the shooter gunned down 17 students and staff members at Marjory Stoneman Douglas High School in Parkland, Florida, Broward County Sheriff Scott Israel said at a news conference Friday.

He waited outside the building for several minutes, when he should have "went in" and "addressed the killer — killed the killer," Israel said.

"I am devastated," Israel added. "Sick to my stomach. He never went in."

Peterson had been stationed at the high school since 2009, and received numerous glowing performance reviews and evaluations from his superiors. He was also named Parkland's school resource officer of the year in 2017, The Miami Herald reported.

But one student, 18-year-old Samantha Fuentes, told The New York Times that Peterson "is not someone who has much of a presence" in the school.

Deputies from the Palm Beach County Sheriff's Office are now standing guard outside Peterson's home because his family fears for their safety. But some students also expressed empathy for Peterson. Former Stoneman Douglas student Lucas Macaluso told the Herald he believed Peterson had made a "huge mistake," but that his role in the school had mostly been breaking up lunchroom fights — not confronting active shooters.

Another student, Jaclyn Corin, wrote on Twitter that Peterson's failure to intervene proved why teachers shouldn't be armed.

"Being in this type of emergency is traumatizing both for the students AND teachers. If the SCHOOL RESOURCE OFFICER was too afraid, it's highly unlikely that an everyday civilian like a math teacher will be able to respond quickly and precisely," she said.

Last Wednesday's shooting wasn't the first time Peterson was expected to deal with the alleged gunman, Nikolas Cruz. The Broward County Sheriff's Office received "thirdhand information" in February 2016 that Cruz "planned to shoot up the school" and posted Instagram pictures of guns, The Times reported.

A deputy found that Cruz had knives and a BB gun and passed the information along to Stoneman Douglas' school resource officer — that was Peterson.

The incident follows a long series of missteps from nearly all levels of law enforcement who had crossed paths with Cruz in recent years.

The FBI admitted last Friday it failed to follow up on a tip that Cruz might plan a school shooting, and local authorities had interacted with Cruz dozens of times as he was growing up.

Florida's state social services agency also investigated Cruz in 2016 after he posted violent videos on Snapchat, but soon closed it after determining he wasn't a threat to himself or others.

DON'T MISS: Florida teacher who sheltered dozens of students lays out a simple explanation for why arming faculty won't work