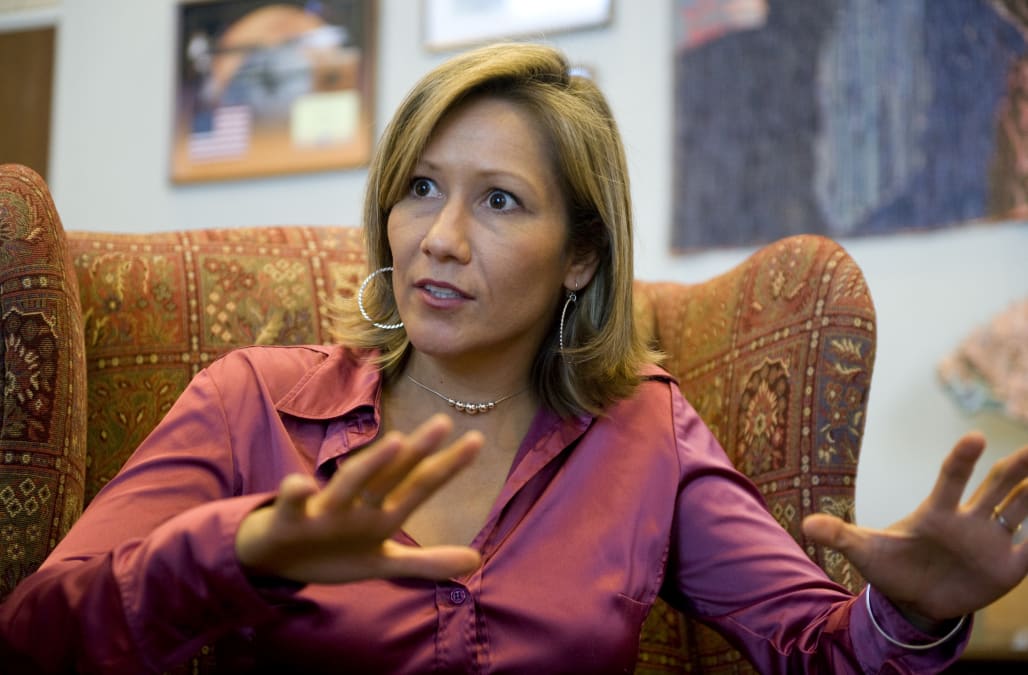 The race for governor of California expanded this week with the official announcement by Amanda Rentería that she will be running to replace Governor Jerry Brown.

The former national political director for Hillary Clinton's 2016 campaign and most recently former chief of operations at the California Department of Justice jumped into the race to run the behemoth state almost three years after leading candidate Gavin Newsom announced his candidacy.

"We can no longer do politics like we've done it in the past. "We need leaders who can inspire a new generation of public servants, bring new voices to the table, and do it with a sense of joy and optimism," said Rentería in a press release issued with her announcement.

Rentería, who ran for Congress in 2014 but lost to Republican David Valadao, faces a daunting task. Gavin Newsom, the former mayor of San Francisco and current lieutenant governor of California has been seen as the heavy favorite to win by political experts since his entry.

Antonio Villaraigosa, the two-term former Mayor of Los Angeles entered the race over 15 months ago, and has emerged as the strongest challenger to Newsom. A recent poll by the Public Policy Institute of California reported that Newsom and Villaraigosa are in a "virtual tie", although a quarter of likely voters still are undecided.

In California, the top two finishers face each other in November, regardless of party.

The race for governor will undoubtedly be run on an ideological spectrum dominated by Democrats, but swaths of the Golden State have traditionally voted for Republicans, such as the Central Valley, a region driven by rural values and agriculture interests.

With Newsom's bona fides firmly in the liberal camp, Villaraigosa's strategy has been to mobilize Latino voters and position himself as a Southern California institution that will reach out to the Central Valley.

Villaraigosa surprised many politicos when he turned to Republican strategist Mike Madrid to advise him, sending a strong signal that rather than challenging Newsom as a progressive candidate, he would position himself as a centrist that will go after the powerful Central Valley voters to add to his Latino base.

However, the entry of Rentería could complicate that strategy for Villaraigosa, and Rentería's late entry has experts asking questions about the motivation behind her bid for governor.

A child of immigrants and raised in the Central Valley, Rentería was the first to be admitted into Stanford University from her high school in Woodlake, California, which sits at the foot of the Sequoia National Forest just outside Fresno.

As the daughter of the Valley, Rentería's appeal to Central Valley voters may have broad implications, not only for race for governor, but for other races as well.

"Things just got interesting", Anna Sampaio, an associate professor and chair of the Ethnic Studies department at Santa Clara University, said in a phone call with NBCNews.

Sources close to the Villaraigosa camp dismissed Rentería's chances, but also questioned her motivation for running, speculating that she may be trying to split Villraigosa's base among Latino voters, as well as pull away voters from the valley.

Some have also questioned the role that California Attorney General Xavier Becerra, may have had in Rentería's annoucement. Becerra was Rentería's boss and reportedly accepted her resignation several weeks ago so that she may run for governor. Becerra also graduated from Stanford University.

The political history between Villaraigosa and Becerra is long, going back to the early 1990's when Villaraigosa supported Becerra's run for Congress in 1992. However, when Antonio Villaraigosa made his first bid for mayor of Los Angeles in 2001, Becerra entered the race as well.

To many, particularly Villaraigosa, this was seen as a disloyal move that undermined Villaraigosa's ability to solidify his appeal to Latinos in Los Angeles. Villaraigosa lost that election to James Hahn, but later defeated Hahn for mayor in 2005.

For some political experts, Rentería's close ties to Becerra is supicious, and is viewed by some as a move to damage Villaraigosa's candidacy to curry favor with Newsom by Becerra, perhaps a favor for a future endorsement when Diane Feinstein retires from the U.S. Senate.

However, Sampaio thinks the reason for Rentería's bid is simpler. "She can be a stopgap, an alternative candidate in case the top two candidates implode. She has significant policy experience, and she can shore up name recognition for the future, perhaps a run for Senate," Sampaio said.

Another theory, says Sampaio, is that as a Democratic operative, Rentería is the perfect candidate to drive up Democratic turnout in the Central Valley that will force Republicans to spend money on not just the governor's race but on vulnerable congressional candidates too.

"Kevin McCarthy, David Valadao, and Devin Nunes, are all [Republican congressional] candidates who would have a much easier time running if someone like Rentería was not in the race," said Sampaio.

All three candidates are Republicans in a state increasingly hostile to Republicans in a part of California that continues to transform, demographically. Sampaio dismissed the notion that Rentería's late entry into the race could be an act of political naïveté.

As former high-ranking Clinton campaign aide, Rentería delivered an overwhelming vote for Clinton in California, but there is little evidence that she does not also recognize the task at hand in running for a state as big as California.

RELATED: A look back at Hillary Clinton and Donald Trump's final campaign days

It was also not lost on anyone who spoke with NBCNews that both Newsom and Villaraigosa have a history of personal indiscretions within their marriages. In the age of #MeToo, their pasts will most certainly come up and present a threat to their standing in the progressive state.

Additionally, Sonja Diaz, the Founding director for the Latino Politics and Policy Initiative at University of California Los Angeles, said that Rentería's run will "spice up the election" and not only force the candidates to address regional differences, but have a solid discussion on policies. As the only true progressive candidate in the Central Valley, Diaz said in a phone interview with NBCNews, she will make all the candidates talk about policy.

When asked about the history of Villaraigosa and Newsom and how Rentería's entry could impact their runs, she would not offer an opinion, other than to say, "I can't speculate but I think gender matters."