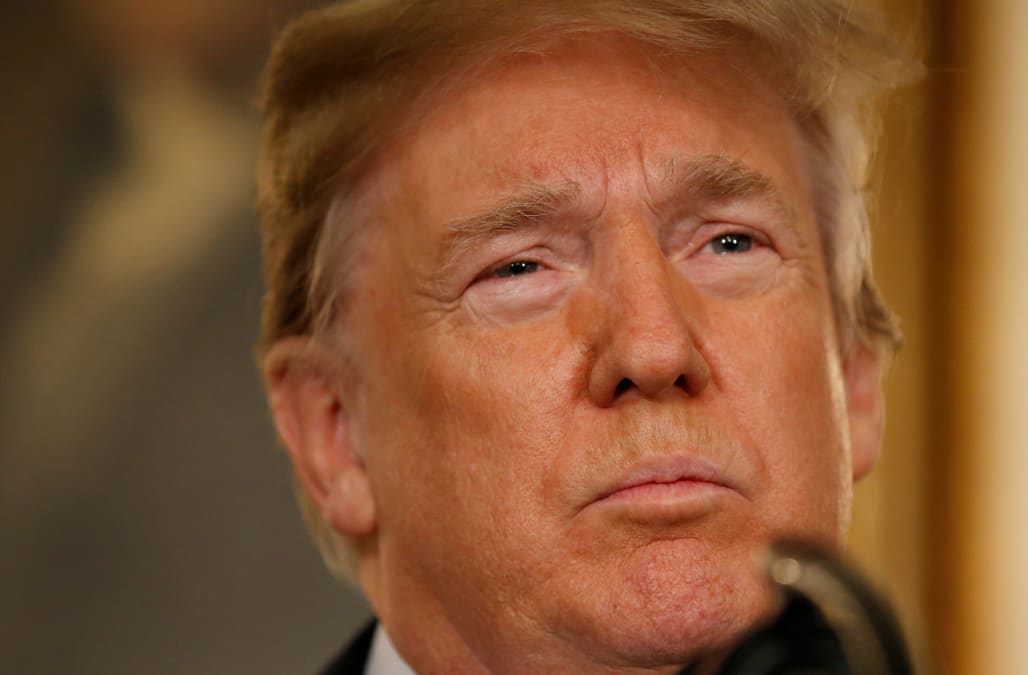 President Donald Trump lashed out at the "Fake News Media" in a series of tweets Saturday in which he distanced himself from special counsel Robert Mueller's ongoing investigation into Russia's meddling in the 2016 election.

On Friday, Mueller's office charged 13 Russian nationals and three Russian companies with violating US law and interfering in the US political system. Deputy Attorney General Rod Rosenstein announced the indictments during a press conference, saying that Russians began preparing their interference campaign in 2014. He added that the indictment did not contain allegations of any effect on the outcome of the race.

"Funny how the Fake News Media doesn’t want to say that the Russian group was formed in 2014, long before my run for President," Trump said in a tweet. "Maybe they knew I was going to run even though I didn’t know!"

Funny how the Fake News Media doesn’t want to say that the Russian group was formed in 2014, long before my run for President. Maybe they knew I was going to run even though I didn’t know!

Several journalists, including New York Magazine correspondent Olivia Nuzzi, noted that Trump was in fact considering running for president as early as 2014.

"When I interviewed Trump in November 2014, he told me he was considering 2016," Nuzzi said in a tweet Saturday. She then linked to an article she published while she was working for The Daily Beast in December of that year that was titled, 'Trump is thinking about a run at the White House again."

Mueller's indictment filing said the Russians started their operation around June 2014, five months before Trump's interview with Nuzzi. The New York Times' Maggie Haberman also noted that Trump had been considering a presidential run since 2014, though it's unclear whether she made the statement in reference to Nuzzi's story or another report.

See more inside the firestorm:

How the left and right see the Trump-Russia firestorm
Trump's staunchest allies in the right-wing and far-right media sphere, like Fox News opinion commentator Sean Hannity, were largely opposed to the Russia probe and Mueller's appointment to lead it from the start.
Hannity has accused Mueller of "trying to take down President Trump" and has ramped up calls for the special counsel to resign over what he perceives as bias against Trump on Mueller's team.
He has also echoed Trump's view that the investigation is a "witch hunt" and asked that a special counsel be appointed to investigate former Democratic presidential candidate Hillary Clinton and her alleged Russia ties.
Hannity's remarks have largely been reinforced, and vice versa, by other far-right media outlets Breitbart News and Infowars, both of which have repeatedly questioned the objectivity of the Russia probe and called for Clinton to be investigated.
"What type of arrogant people openly cover up for Hillary, kill criminal investigations into her, and then go around and admit they're political and hate Trump?" Infowars founder Alex Jones said December 6.
Conservative commentators escalated their criticism of the Russia probe after it emerged that Mueller ousted an investigator over the summer for exchanging anti-Trump texts with a colleague.
Former FBI agents and federal prosecutors pushed back on the characterization, saying that it's perfectly acceptable for investigators to have political views, as long as they don't interfere with the investigation.
As the investigation began gaining more steam under Mueller, Trump's allies reportedly began urging him to fire the special counsel.
The majority of Republican lawmakers in Congress and mainstream conservatives respected the credibility of the Russia investigation and Mueller's appointment in the beginning.
"By having someone like Bob Mueller head the investigation assures the American people that there’s no undue influence, be it here or be it at the other end of Pennsylvania Avenue, or within the Justice Department or FBI," Senate Intelligence Committee chairman Richard Burr said in May.
"It would be a disaster" if Trump fired Mueller, Republican Sen. Lindsey Graham of South Carolina told Politico in June. "There's no reason to fire Mueller. What's he done to be fired?"
Republican Sen. Susan Collins of Maine told Politico that firing Mueller, would "certainly be an extraordinarily unwise move."
Sen. John McCain of Arizona told Politico in June: "He's a very much trusted individual and had an outstanding record as head of the FBI."
Senate Majority Leader Mitch McConnell has largely refrained from discussing the Russia probe, and House Speaker Paul Ryan said in November that Mueller should be allowed to complete the investigation.
Even some of Trump's most stalwart mainstream conservative allies praised Mueller. Former House Speaker Newt Gingrich said shortly after his appointment that he was a "superb choice" with "honesty and integrity."
Gingrich reversed his position in June, tweeting that Republicans were "delusional" if they believed Mueller would be fair. "Time to rethink," he added.
In recent weeks, several Republican lawmakers, including some who initially supported Mueller, have questioned whether the investigation is totally unbiased, particularly in light of the the investigators' anti-Trump texts.
"How can, with a straight face, can you say that this group of Democrat partisans are unbiased and will give President Trump a fair shake?" Republican Rep. Steve Chabot of Ohio asked deputy attorney general Rod Rosenstein during a House Judiciary Committee hearing Wednesday.
Lawmakers also intensified calls for a second special counsel to investigate alleged bias within the FBI and DOJ, as well as whether the Steele dossier — an explosive collection of memos about Trump's alleged Russia ties — was politically motivated.
U.S. Representative Jim Jordan (R-OH) walks into a Speaker's office on Capitol Hill in Washington, U.S., March 23, 2017. REUTERS/Yuri Gripas
Graham did not withdraw his support of Mueller, but said last week that it was "long past time" for a second special counsel to investigate Clinton, the Uranium One deal, the firm which produced the Steele dossier, and alleged bias in the FBI and DOJ.
Democratic lawmakers, meanwhile, have almost unanimously defended the investigation.
Sen. Richard Blumenthal, a Democrat representing Connecticut, said last week that it was "absolutely necessary" to pass legislation protecting Mueller from being fired.
Democratic Sen. Cory Booker of New Jersey, who co-sponsored a bill with Graham that would protect Mueller, told Politico that there was a "sense of urgency to do this — not just for this moment in history, but to create more checks and balances within the system as a whole."
"We should make certain the integrity of the special counsel is protected," Democratic Sen. Dick Durbin of Illinois told reporters last week.
Some Democratic lawmakers have gone a step further and suggested that Trump should be impeached.
Six Democrats in the House of Representatives introduced articles of impeachment last month.
The lawmakers listed five reasons why Trump should be impeached, including his response to the deadly white nationalist rally in Charlottesville last August, and his decision to fire Comey in May.
"Given the magnitude of the constitutional crisis, there's no reason for delay," Rep. Steve Cohen of Tennessee told The Independent. Cohen was also one of the sponsors of the resolution.
Legal analysts have largely declined to offer judgment on whether Trump should be impeached, but most have underscored the importance of the Russia investigation and Mueller's independence.
Up Next

Nevertheless, the charges were hailed as a triumph by a president who frequently complains on Twitter and to advisers about the Russia investigation, which he has characterized as a "hoax," a "witch hunt," and "fake news." He has also cast doubt on the intelligence community's assessment that Russia's efforts were undertaken in an effort to boost him to the presidency.

In several tweets on Saturday, Trump cited a New York Post columnist and Facebook's vice president of ads to support his claims.

"'Charges Deal Don A Big Win,'” written by Michael Goodwin of the @nypost, succinctly states that 'the Russians had no impact on the election results.' There was no Collusion with the Trump Campaign. 'She lost the old-fashioned way, by being a terrible candidate. Case closed,'" Trump said.

Friday's indictment did not accuse any Americans of being knowingly involved in Russia's influence operation, but experts said the charges are likely an avenue to the next step: determining whether any US citizens or, more narrowly, members of Trump's campaign had knowledge of, aided, or abetted the Russian effort.

In addition to examining whether the Trump campaign colluded with Moscow, Mueller is also conducting a parallel investigation into whether Trump sought to obstruct justice in the Russia probe when he fired FBI director James Comey last May.

SEE ALSO: Trump says he did 'nothing wrong' after Mueller indicts Russians for 2016 election interference

DON'T MISS: A Russian troll factory had a $1.25 million monthly budget to interfere in the 2016 US election