Melania Trump breaks precedent again, doesn't walk to Marine One with the president 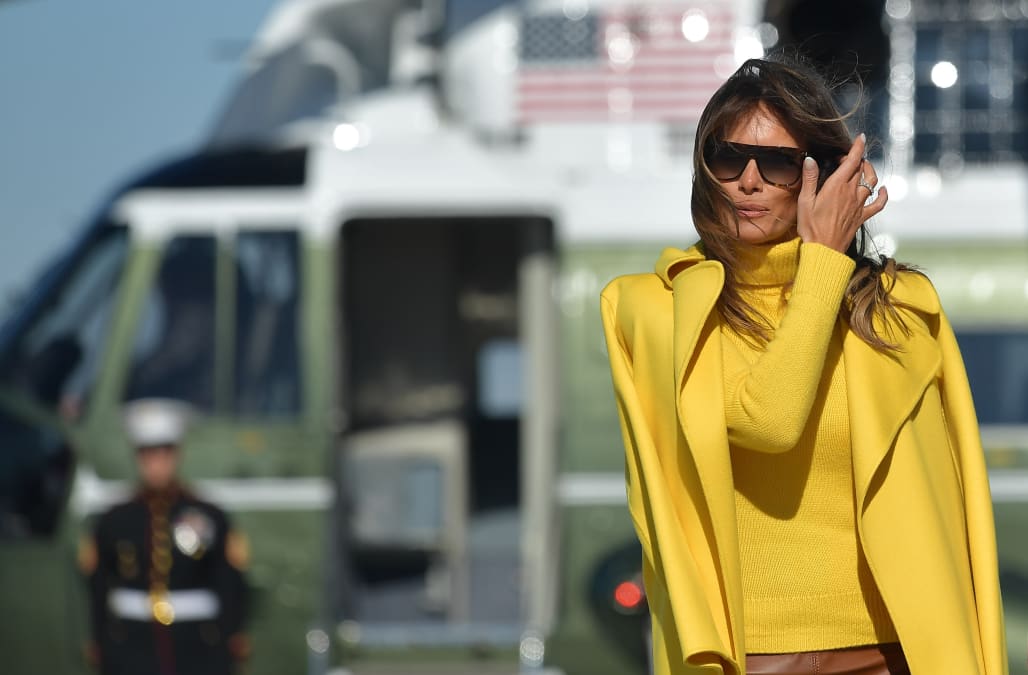 In an unprecedented move Friday, First Lady Melania Trump went against tradition and traveled to Marine One without her husband.

While it is protocol for the first couple to walk across the White House South Lawn together, before the Trumps headed to Parkland, Florida to meet with victims of the mass shooting there, CNN reported that Melania drove to Andrews Air Force Base in Maryland separately ahead of her husband

The move comes after new allegations that Trump had an affair with former Playboy Playmate of the Year Karen McDougal.

The first lady did  accompany her husband when he visited  the mass shooting  victims, and her communications director told PEOPLE in a statement, quote,  “With her schedule today it was easier to meet at the plane,”

The New Yorker released a report early Friday detailing the alleged affair, with McDougal claiming she had a nine-month sexual relationship with the President in 2006 after they met during a taping of The Apprentice at the Playboy Mansion in Los Angeles.

RELATED: 37 of the most iconic photos of Melania Trump's first year as first lady

Donald and Melania Trump attend his inauguration ceremonies to be sworn in as the 45th president of the United States on the West front of the U.S. Capitol in Washington, U.S., January 20, 2017. It was also during this portion of the event that a video of Melania Trump looking "petrified" at the ceremony made rounds on social media and prompted the infamous hashtag #FreeMelania. REUTERS/Lucy Nicholson

PALM BEACH, FL - FEBRUARY 03: U.S. President Donald Trump walks with his wife Melania Trump on the tarmac after he arrived on Air Force One at the Palm Beach International Airport for a visit to his Mar-a-Lago Resort for the weekend on February 3, 2017 in Palm Beach, Florida.

In this photo, the woman on the right, who looks strikingly similar to Melania Trump, later fueled the wild conspiracy theory that the first lady has a body double. (Photo by Joe Raedle/Getty Images)

US First Lady Melania Trump arrives before US President Donald Trump addresses a joint session of the US Congress on February 28, 2017, in Washington, DC.

Trump's choice to go with the black Michael Kors ensemble sparked backlash from many online who deemed her choice of sequins was "inappropriate." (Getty/ AFP / MANDEL NGAN)

The photo of the two disembarking Air Force One reignited debate over Trump's alleged disregard for the first lady after she was seen descending far behind him. (REUTERS/Yuri Gripas)

WASHINGTON, DC - APRIL 2017: In this handout image provided by the White House, First Lady Melania Trump poses for her official portrait in her residence at the White House April 2017 in Washington, DC. (Photo by The White House via Getty Images)

U.S. President Donald Trump, U.S. first lady Melania Trump and the their son Barron stand during the National Anthem at the 139th annual White House Easter Egg Roll on the South Lawn of the White House in Washington, U.S., April 17, 2017.

Video later emerged from the moment seen photographed in which Melania Trump is shown subtly nudging her husband, appearing, to some, to remind him of the tradition. (REUTERS/Joshua Roberts)

WASHINGTON, DC - APRIL 28: U.S. first lady Melania Trump hugs 7-year-old Noah Haas after he presented her with a gift at the Children's National Health System April 28, 2017 in Washington, DC. Trump spoke a the opening of the Bunny Mellon Healing Garden for patients and famlies, an outdoor location for to safely spend time outdoors while receiving treatment at the hospital. (Photo by Win McNamee/Getty Images)

Footage also emerged of the first couple on the tarmac that appeared to show the first lady slapping away at President Trump's hand as he seemed to reach for hers -- and to say it went viral is an understatement. (Photo by Corinna Kern/NurPhoto via Getty Images)

US President Donald Trump and First Lady Melania Trump step off Air Force One upon arrival at Rome's Fiumicino Airport on May 23, 2017. Donald Trump arrived in Rome for a high-profile meeting with Pope Francis in what was his first official trip to Europe since becoming US President.

Footage immediately went viral from this moment as well. It appeared to show Trump reaching for his wife's hand as they departed the plane when the first lady seemed to pull her hand away as she abruptly fixes her hair, after which Trump rests his hand on her rear end instead. (Getty/ AFP PHOTO / Filippo MONTEFORTE)

Pope Francis walks past Ivanka Trump (L) and First Lady Melania Trump during a private audience at the Vatican, May 24, 2017. REUTERS/Alessandra Tarantino/pool
First Lady Melania Trump holds a baby as U.S. President Donald Trump (not pictured) greets members of the congress and their families as they attend a congressional picnic event at the White House in Washington, U.S., June 22, 2017. REUTERS/Carlos Barria
(Front row LtoR) First Lady of Turkey Emine Gulbaran Erdogan, First Lady of the US Melania Trump, Queen Mathilde of Belgium, (back row, LtoR) First Gentleman of Luxembourg Gauthier Destenay, partner of Slovenia's Prime Minister Mojca Stropnik and First Lady of Iceland Thora Margret Baldvinsdottir pose for a family photo before a diner of the First Ladies and Queen at the Royal castle in Laken/Laeken, on May 25, 2017, in Brussels. / AFP PHOTO / BELGA / YORICK JANSENS / Belgium OUT (Photo credit should read YORICK JANSENS/AFP/Getty Images)
WASHINGTON, DC - JULY 4: U.S. President Donald Trump and first lady Melania Trump observe the playing of the national anthem from the Truman Balcony on July 4, 2017 in Washington, DC. The president was hosting a picnic for military families for the July 4 holiday. (Photo by Zach Gibson/Getty Images)

U.S. President Donald Trump and first lady Melania Trump board Air Force One for travel to Texas to visit the areas devastated by Tropical Storm Harvey, the first major natural disaster of his White House tenure, from Joint Base Andrews, Maryland, U.S., August 29, 2017.

Photos from the trip went viral after the first lady was slammed on social media for wearing stiletto heels before boarding flights to hurricane-ravaged areas. (REUTERS/Carlos Barria)

US First Lady Melania Trump addresses other spouses of world leaders at a United Nations luncheon on September 20, 2017, in the United States Mission in New York. The First Lady addressed the issue of vulnerable children around the world.

The first lady was also slammed for this particular outfit, which sold for $2,950 and some critics likened to a "bright pink hot air balloon."

The White House told The New Yorker that Trump denies having had an affair with McDougal, saying, quote  “This is an old story that is just more fake news. The President says he never had a relationship with McDougal.”

Melania has broken tradition before, with CNN reporting that she traveled alone on Jan 30th to the President’s state of the union address following the aftermath of allegations relating to Trump’s infidelity.