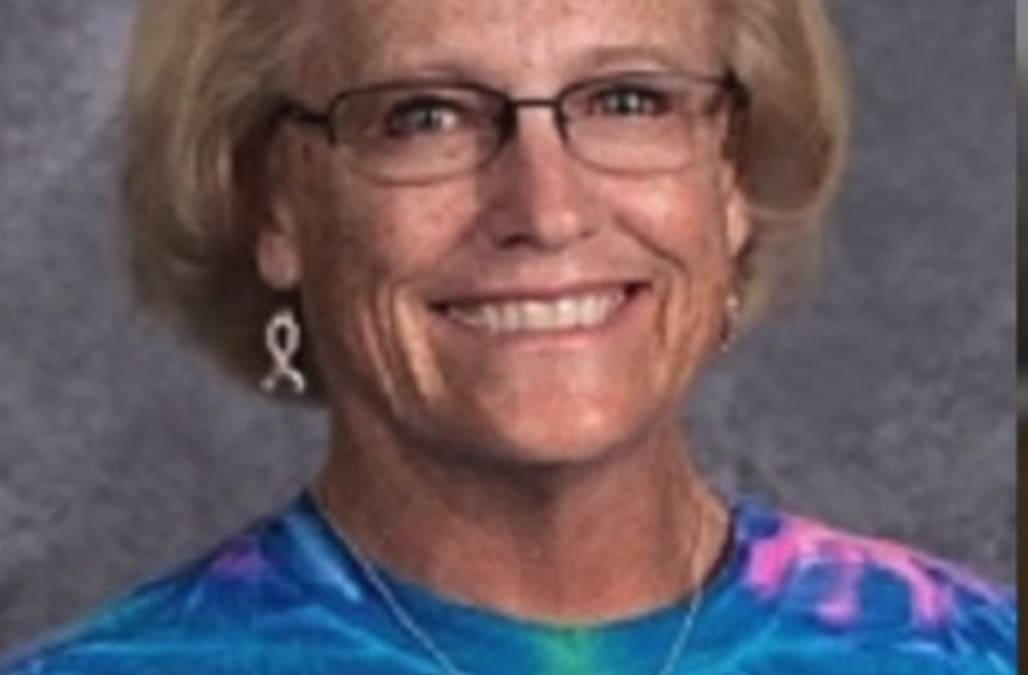 A Colorado teacher was charged with child abuse and assault after she allegedly forced a student to stand up during the Pledge of Allegiance.

Karen Smith, a physical education teacher at Angevine Middle School in Lafayette, was accused of forcefully making a male student stand for the pledge by grabbing his jacket, lifting him to his feet and removing him from the classroom on Feb. 1, according to KDVR.

Boulder Valley School District spokesman Randy Barber told the Denver Post that the district's policy states that students are allowed to either sit or stand during the pledge.

After a brief investigation, the Boulder District Attorney's Office announced on Tuesday that Smith would be charged with child abuse and third-degree assault.

The school's principal, Mike Medina, sent the following letter to students' families in regards to the incident.

I want to provide you with an update regarding the investigation that we shared with our school community a couple weeks ago. Today we learned that the Boulder District Attorney’s Office has formally charged Angevine Middle School Physical Education Teacher Karen Smith.

Angevine and the Boulder Valley School District are cooperating with the District Attorney’s Office and respect their decision on this matter. While we are unable to share more because it is a legal and personnel matter that the school district is actively investigating, I, again, want to reaffirm that our focus remains firmly on our students.

As you may know we have found an excellent long-term substitute to support our students in PE, along with Mr. Atencio, through the end of the year. Genevieve Aragon has subbed at Angevine and other BVSD schools previously and has already been working with our students in Ms. Smith’s absence. So far, I’ve received very positive reports from students and staff alike.

Thank you to all of your for your support and patience during this time.

Smith, who has worked for the school district for over 20 years, was processed at the Lafayette Police Department on Wednesday and released with a court summons.

Fans react to NFL players protesting during national anthem
Oct 8, 2017; Houston, TX, USA; Houston Texans fan holds up signs before the game against the Kansas City Chiefs at NRG Stadium. Mandatory Credit: Kevin Jairaj-USA TODAY Sports
ATLANTA, GA - OCTOBER 01: A fan in the stands yells at players during the national anthem prior to the game between the Atlanta Falcons and the Buffalo Bills at Mercedes-Benz Stadium on October 1, 2017 in Atlanta, Georgia. (Photo by Kevin C. Cox/Getty Images)
CLEVELAND, OH - OCTOBER 01: A Cleveland Browns fan holds a sign in protest durning the nation anthem in the game between the Cleveland Browns and the Cincinnati Bengals at FirstEnergy Stadium on October 1, 2017 in Cleveland, Ohio. (Photo by Justin Aller /Getty Images)
HOUSTON, TX - OCTOBER 01: Fans making a statement about the recent national anthem protests during a football game at NRG Stadium on October 1, 2017 in Houston, Texas. (Photo by Bob Levey/Getty Images)
BALTIMORE, MD - OCTOBER 01: A detail view of a sign displayed by fans during a game between the Pittsburgh Steelers and Baltimore Ravens at M&T Bank Stadium on October 1, 2017 in Baltimore, Maryland. (Photo by Patrick McDermott/Getty Images)
HOUSTON, TX - OCTOBER 01: Fans making a statement about the recent national anthem protests during a football game at NRG Stadium on October 1, 2017 in Houston, Texas. (Photo by Bob Levey/Getty Images)
Los Angeles Charger fans make their way to the stadium past Donald Frazell from Los Angeles as he holds a sign near other protesters demonstrating in support of NFL players who "take a knee" before kickoff and during the National Anthem protesting police violence outside the StubHub Center where the Los Angeles Chargers are playing the Philadelphia Eagles in an NFL football game in Carson, California, U.S. October 1, 2017. REUTERS/Danny Moloshok
Oct 1, 2017; Denver, CO, USA; Denver Broncos fans show their support with t-shirts in reference to standing for the American national anthem during the fourth quarter of a game against the Oakland Raiders at Sports Authority Field at Mile High. Mandatory Credit: Ron Chenoy-USA TODAY Sports
Sep 24, 2017; Charlotte, NC, USA; Carolina Panthers fans hold up signs in the fourth quarter at Bank of America Stadium. Mandatory Credit: Bob Donnan-USA TODAY Sports
Sep 24, 2017; Indianapolis, IN, USA; Cleveland Browns fans during their game against the Indianapolis Colts at Lucas Oil Stadium. Mandatory Credit: Thomas J. Russo-USA TODAY Sports
Sep 24, 2017; Foxborough, MA, USA; A New England Patriots fan holds a sign as they take on the Houston Texans in the second half at Gillette Stadium. Mandatory Credit: David Butler II-USA TODAY Sports
GLENDALE, AZ - SEPTEMBER 25: Fans hold signs before the singing of the National Anthem before the NFL game between the Arizona Cardinals and the Dallas Cowboys at the University of Phoenix Stadium on September 25, 2017 in Glendale, Arizona. (Photo by Christian Petersen/Getty Images)
At the start of the game protestors take a knee in support of the movement started by NFL player Colin Kaepernick, outside Lincoln Financial Field, in South Philadelphia, PA, on September 24, 2017. Similar protest are staged around the nation after US President Donald Trump named Kaepernick a Son of A Bitch at a recent rally. (Photo by Bastiaan Slabbers/NurPhoto via Getty Images)
CINCINNATI, OH - OCTOBER 8: A fan of the Cincinnati Bengals holds up a sign showing his opposition to players kneeling during the national anthem during the game between the Cincinnati Bengals and the Buffalo Bills at Paul Brown Stadium on October 8, 2017 in Cincinnati, Ohio. (Photo by John Grieshop/Getty Images)
Up Next