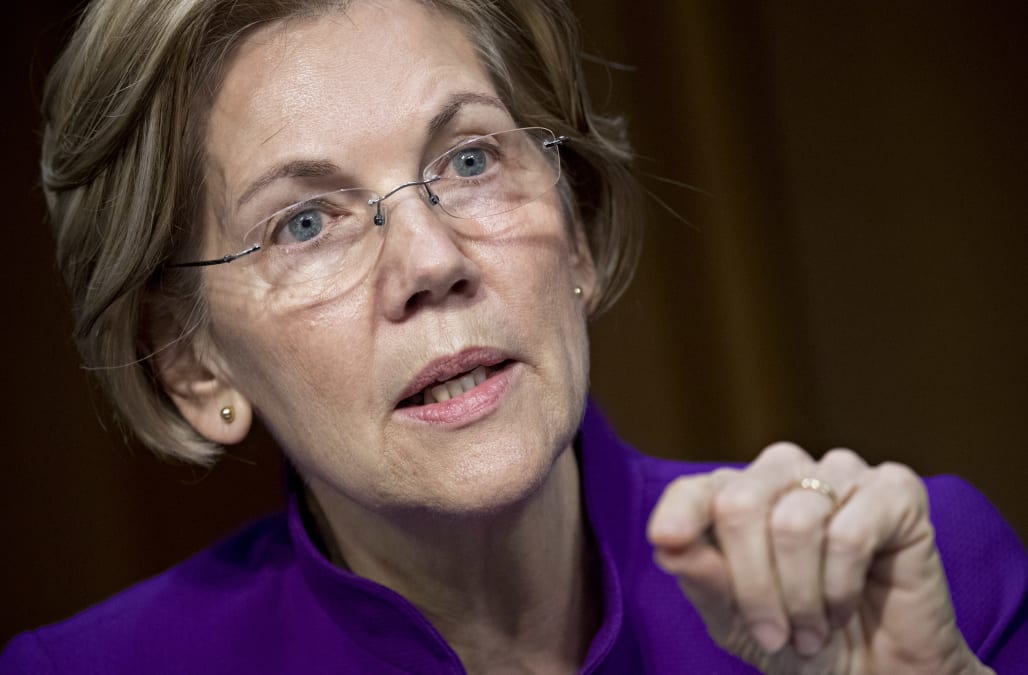 Sen. Elizabeth Warren hit back on Wednesday at President Donald Trump for repeatedlyridiculing her as "Pocahontas," saying he has tried to make Native American history "the butt of a joke" while also defending herself against criticism she hasn't been forthright about her heritage.

"We have a president who can't make it through a ceremony honoring Native American war heroes without reducing Native history, Native culture, Native people to the butt of a joke," Warren, a possible Democratic presidential candidate, said during an unscheduled speech at the National Congress of American Indians in Washington, D.C. "The joke, I guess, is supposed to be on me."

Warren, who Trump has claimed "made up her heritage" to advance her career, also addressed her family background, explaining that her mother was part Native American, but insisted she never tried to use it to her advantage.

RELATED: A look at Elizabeth Warren

"I get why some people think there's hay to be made here. You won't find my family members on any rolls, and I'm not enrolled in a tribe," said Warren. "And I want to make something clear. I respect that distinction."

She added, "I understand that tribal membership is determined by tribes — and only by tribes. I never used my family tree to get a break or get ahead. I never used it to advance my career. But I want to make something else clear, too: My parents were real people."

The speech by Warren, who would be a leading Democratic presidential contender if she decides to run, highlighted that she's prepared to directly take on Trump over his insults, inflammatory rhetoric and contentious policies. Her remarks also show the Massachusetts Democrat is working to shore up possible political weaknesses by addressing her family background and charges she misrepresented it to gain unfair advantage in her career.

Warren said Wednesday her mother's family was "part Native American" and that her parents eloped in 1932 because her father's family opposed the relationship. She told the story of their difficult life together and vowed that she would not let Trump demean their legacy.

"They're gone, but the love they shared, the struggles they endured, the family they built, and the story they lived will always be a part of me. And no one — not even the president of the United States — will ever take that part of me away," she said.

And while Warren acknowledged that "our country's disrespect of Native people didn't start with President Trump," she promised that whenever he — or anyone else — insults her family, she will "use it to lift up the story" of other Native American families and communities.

Trump began using the "Pocahontas" slur to attack Warren during the 2016 campaign. In June 2016, he said Warren "made up her heritage, which I think is racist." "I think she's a racist, actually because what she did was very racist," Trump said then.

Silencing Elizabeth Warren backfires on Republican Senators
That Mitch McConnell quote about Elizabeth Warren sounds like something Don Draper would come up with to market women's running shoes.
#ShePersisted after being called "a black trophy" and "Aunt Jemima." Condoleezza Rice.
.@SenWarren your current protest rooted in past history makes my soul feel this #haiku #letlizspeak #ShePersisted… https://t.co/OzsV7IXp5P
Women now get fired or kicked out of meetings for doing and saying what is right #ShePersisted
This continues a trend in which the ruling party dismisses truth when it does not suit them. Sen Warren knew this, but #ShePersisted. 5/
Amazing that people are rallying around @elizabethforma when she was clearly in the wrong. #ShePersisted #WTF
In support of @SenWarren Democrats should all #readtheletter! #letlizspeak #ShePersisted #ShePersists
Since time immemorial, on this day, and every single day forward, we persist. #shepersisted #letlizspeak #resist https://t.co/fgN9lAEOdg
The world is crashing down and my depression is creeping back, but I'm not gonna stop. #ShePersisted
“chill the #free #exercise of the #vote by black citizens.”Nevertheless shePersisted youBbet sheWould! SenateFloor 4 debate not2takeoreders
#ShePersisted after Keith Olbermann said she was the reason for Planned Parenthood providing abortions. S.E. Cupp.
The systematic attack on women in this country is unacceptable and inexcusable #RiseUp #ShePersisted #GetReadyForAFight
"Nevertheless #ShePersisted" My gurl Alice Paul persisted and so shall we. https://t.co/xyKzVSSLyz
Man, it's so weird how none of the male senators reading this letter got kicked out of the Senate chamber.… https://t.co/sAY0iyY25W
GOP didn't invoke rule 19 on male senators reading the letter because their tone was different from @SenWarren #letlizspeak #ShePersisted
@ListenHereTrump @mtighe15 Also send him copies so he has a chance to study it in detail. #ShePersisted
I 💗 perusing #ShePersisted and seeing all of the women of color who are and have been instrumental to civil rights movements worldwide.
I'm so done with a bunch of old white privileged men fucking up this country - thank goodness #ShePersisted Women will save USA
Dear @SenateMajLdr & @SenateGOP- so you silenced @SenWarren, a woman, due to her "tone", but not your male colleagues? Classy. #ShePersisted
“NOW is a fact that cannot be dodged.” - Sinclair Lewis, It Can't Happen Here #EndFascism #WhateverItTakes #ShePersisted
Can't silence the truth. #ShePersisted
Up Next

Warren faced similar attacks about her heritage during her 2012 Senate race against Republican Scott Brown. Brown claimed she had dishonestly listed herself as Native American while working as a faculty member at the University of Pennsylvania and Harvard to help her career.

Warren denied the charges at the time.

Trump, meanwhile, has continued his use of the derogatory nickname, including during a White House event in November honoring Native American veterans.

More from NBC News:
Gowdy launches probe into Rob Porter’s White House employment
Trump’s lawyer Michael Cohen says he paid Stormy Daniels $130,000 of his own money
Angry note to Donald Trump Jr. revealed: 'You are getting what you deserve'