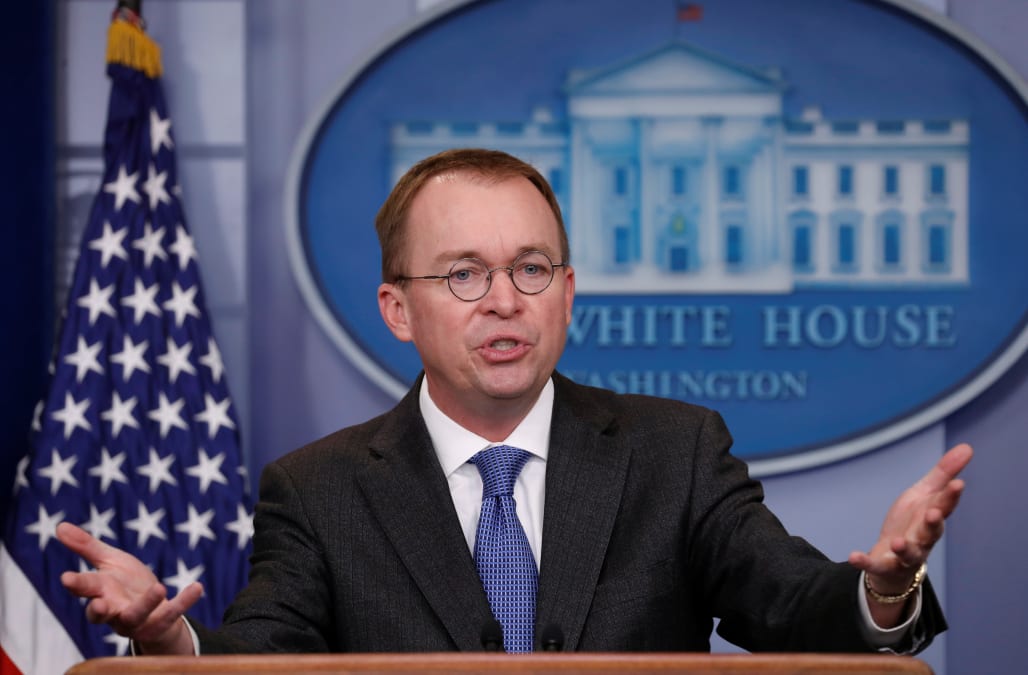 Congress passed and Trump signed legislation raising caps on defense and domestic spending by a total of $300 million over two years, ending a brief government shutdown, the second one this year. With the new spending, the federal deficit is expected to jump to $1.2 trillion in 2019.

“It’s a very dangerous idea, but it’s the world we live in,” Mulvaney said on CBS’s “Face the Nation.”

Mulvaney said Trump wanted higher military spending, and had to agree to higher domestic spending as well in order to get Democrats on board.

“What they said was they would not give us a single additional dollar for defense unless we gave them dollars for social programs,” he said. “They held the Defense Department hostage, and we had to pay that ransom.”

Still, Mulvaney acknowledged he would “probably not” have voted for the deal when he served in the House of Representatives and was known as a fiscal hawk.

“Keep in mind I’m not Congressman Mick Mulvaney anymore,” he said. “My job as the director of the Office of Management Budget is to try to get the President's agenda passed.”

In a separate interview on “Fox News Sunday,” Mulvaney said that the budget proposal Trump is set to release Monday would contain money for his controversial wall along the U.S.-Mexico border.

The budget plan will include $3 billion for the wall — with a contingency to make it $25 billion over two years if Republicans and Democrats reach a deal that would also include restoring protections from deportation for certain young immigrants.

Sen. Rand Paul (R-Ky.), who forced the hours-long shutdown as he railed against the budget deal, slammed his fellow Republicans for “hypocrisy” for voting for both massive tax cuts and spending hikes.

Paul also voted for the GOP tax bill, which is expected to increase the deficit by $1.5 trillion, but said his own position is consistent because he would have also cut spending.

“I think if you're for tax cuts and for increasing spending, that's hypocritical,” he said on “Face the Nation.” “I think there is some hypocrisy there and it shows they’re not serious about the debt.”

“I'm still against deficit spending. Just because Republicans are doing it doesn't make it any better,” he said.

Rep. Jim Jordan (R-Ohio), a founder of the conservative House Freedom Caucus, said Republicans may suffer at the ballot box for breaking their promises of fiscal restraint.