Through multiple teams and sports, Tim Tebow's dog Bronco is always by his side 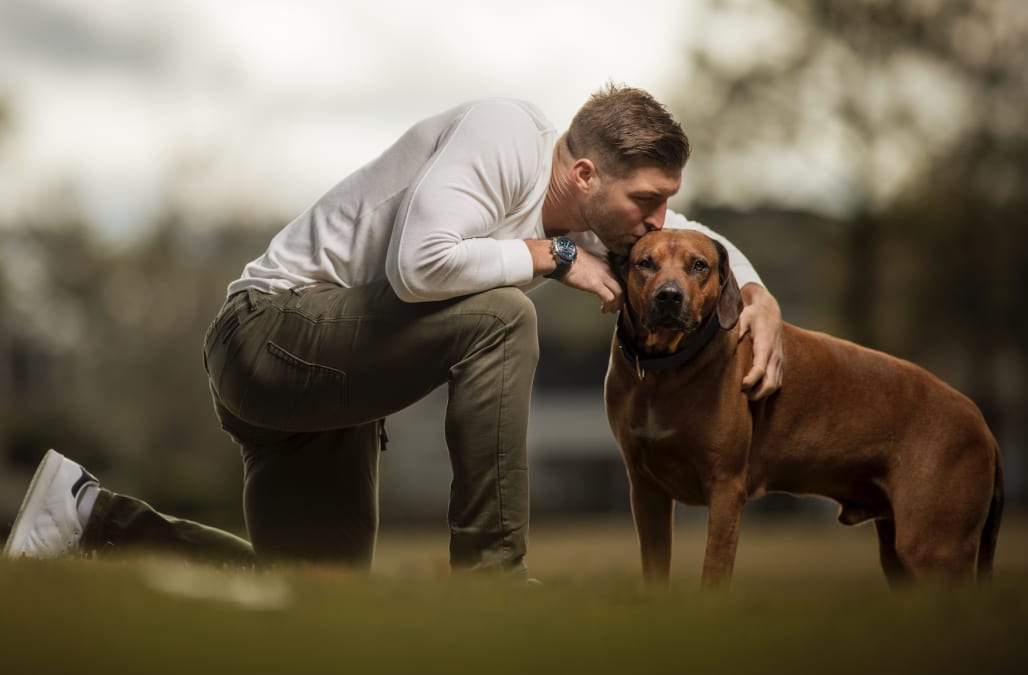 The 2010 NFL Draft changed Tim Tebow's life forever, and not just because it was the start of his NFL career.

After being selected 25th overall by the Denver Broncos, the young athlete received a touching gift -- a "stud" of a Rhodesian Ridgeback, who he appropriately named "Bronco."

"It made sense when I just got drafted by the Broncos," the former quarterback told AOL.com of his dog's moniker. "We've always liked the name, we always liked that truck, so we talked about it and we were like, yeah, that's really cool."

Tim Tebow with his dog, Bronco

Tim Tebow's dog, Bronco, was a gift after he was selected by the Denver Broncos in the 2010 NFL Draft.

"He's a stud," Tebow said of Bronco. "He's slightly arrogant, because he knows he's a stud."
Tebow says he doesn't think Bronco has "ever had a night where he hasn't slept in a bed."
Tebow on Purina ProPlan: "If you truly care about your dog, you'd want them to have a healthy lifestyle."
Up Next

Tebow, a longtime dog lover and owner, is partnering with Purina Pro Plan and taking part in the $1 Million Westminster Kennel Club Dog Show Bracket Challenge ahead of the show later this month.

His pick to win Best In Show? The Rhodesian Ridgeback, of course. 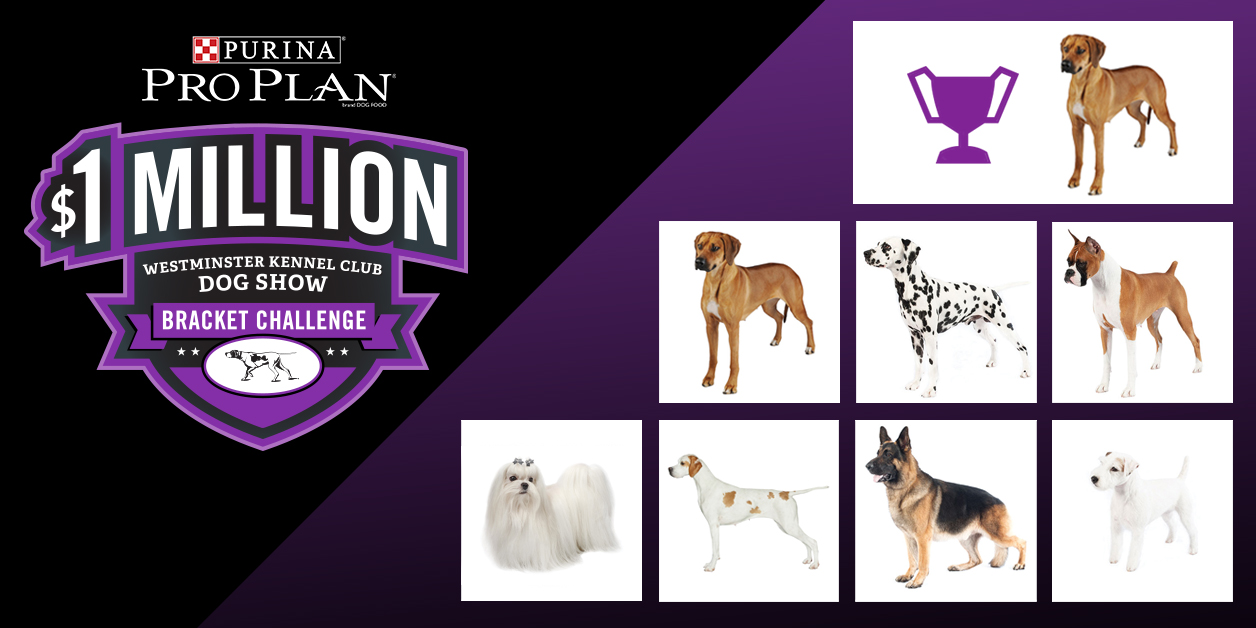 Filling out a bracket of dogs (which fans can do themselves for a chance to win the $1 million at DogShowBracket.com) is, naturally, much different than the usual sports brackets one might find around March Madness.

"Let's be honest, we don't know who the 60th best team in March Madness is," Tebow explained. Purina Pro Plan, however, provides extensive information and history about each breed in the competition -- including the fact that terriers have won Best In Show a whopping 46 times. 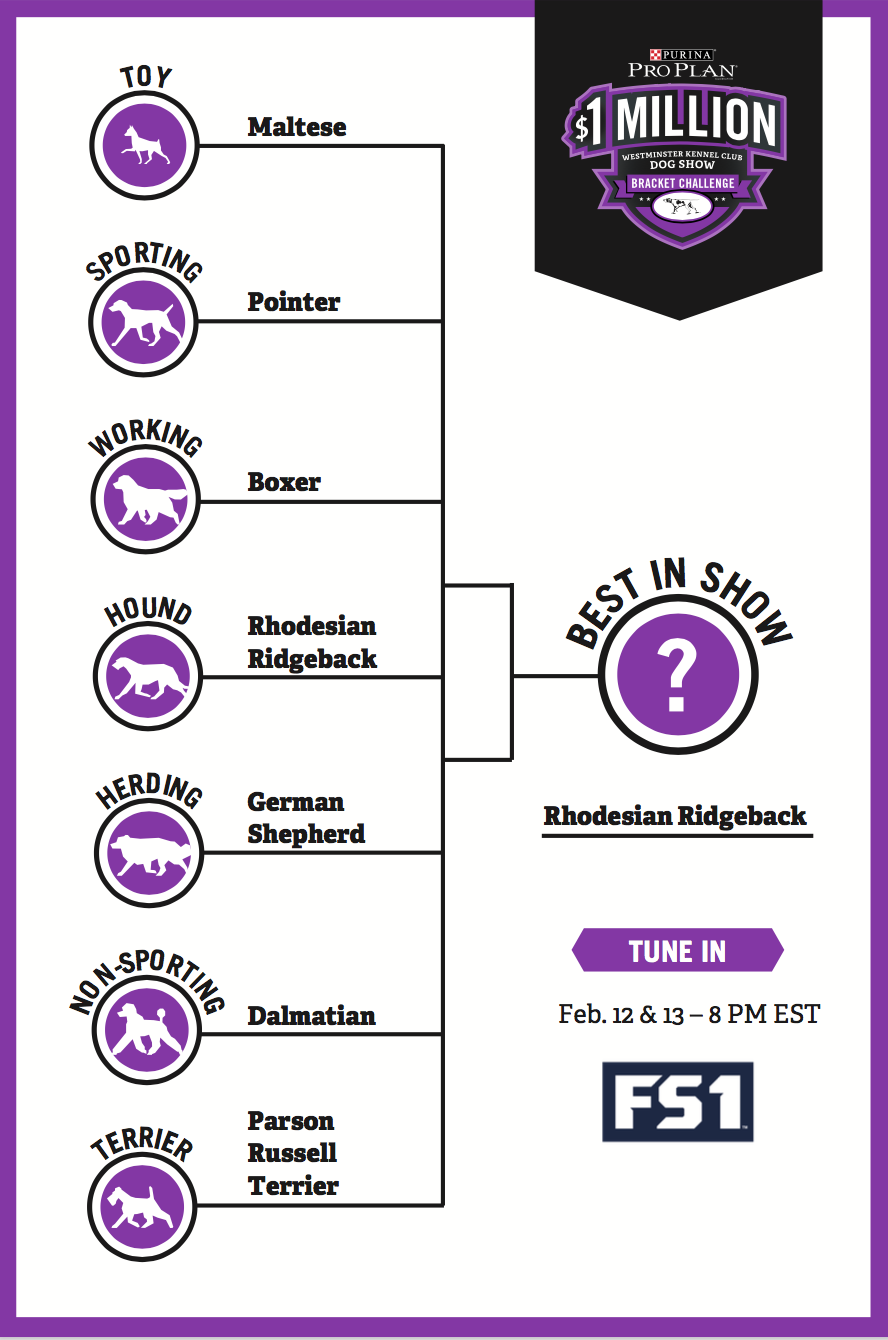 (A breakdown of the breeds in Tim Tebow's bracket)

Despite the fact that the Rhodesian Ridgeback has never taken the crown, Tebow is confident that this could be the breed's year.

The quarterback-turned-outfielder has always been a dedicated dog owner, at times even sneaking out and sleeping in his parents' garage with his pets when he was younger because they weren't allowed in the house. Nowadays, it doesn't matter where Tebow's constantly evolving career takes him -- he says the "sweet and loving" Bronco is always by his side.

"For so many people, [dogs] are our best friends and they provide so much joy and love," Tebow gushed.

He also admitted that, while he did look at the research Purina provides on each show breed, his pick was largely based on emotion -- and, of course, cuteness.