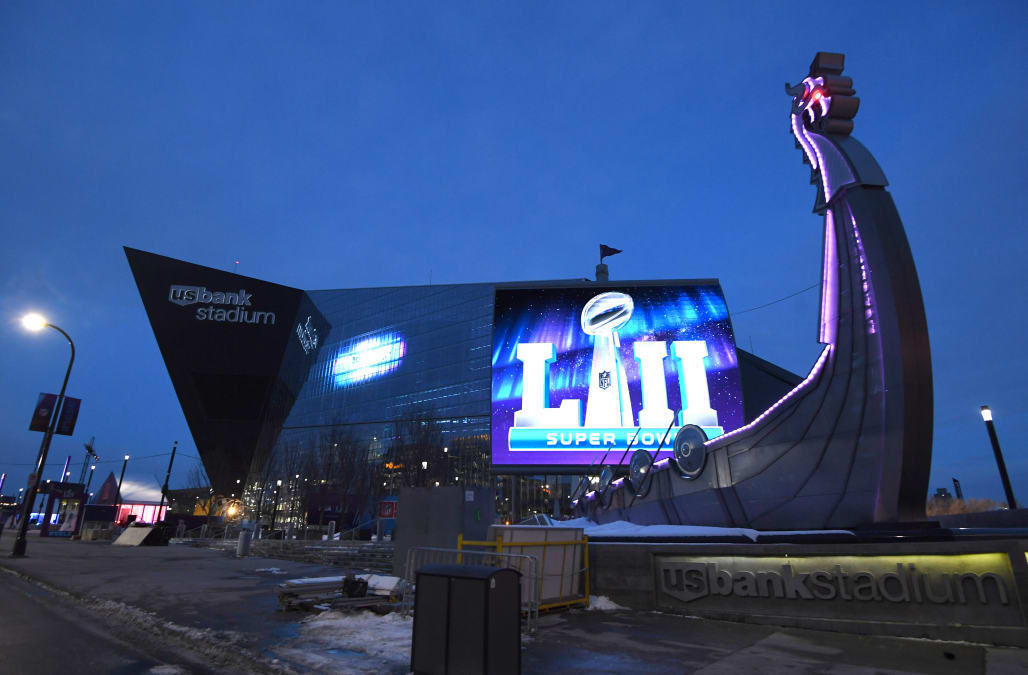 The lucky football fans who snagged tickets for the 2018 Super Bowl will venture inside the US Bank Stadium in Minneapolis, Minnesota on Sunday.

The venue does not look like a typical stadium.

Its design follows the style of modern architecture, characterized by geometric forms, glass-steel-and-concrete construction, and an efficient use of space. The stadium's roof is also partially made of a special plastic film, which helps the interior remain a comfortable temperature during all seasons.

Business Insider spoke with Lance Evans, the venue's lead architect, about the design.

At US Bank Stadium in Minneapolis, the New England Patriots and Philadelphia Eagles will play in the 2018 Super Bowl.

Completed in 2016, the downtown venue features a glass facade with sharp lines.

Visitors will enter through 95-foot-tall, 55-foot-wide pivoting doors, the largest in the world.

The building was designed by HKS Architects, the same firm behind the stadiums where the Dallas Cowboys, Indianapolis Colts, and Los Angeles Rams play.

US Bank Stadium also features the closest seats to the field in the NFL. The first row is just 41 feet away from the game.

Normally, the venue offers free wifi for up to 30,000 fans. But for Super Bowl LII, the building upgraded its bandwidth to handle the 70,000 people who bought tickets for the game.

Unlike other sports stadiums, this one doesn't include a retractable roof, largely due to Minnesota's frigid winters.

Instead, the US Bank Stadium has a roof partly made of a plastic film called ethylene tetrafluoroethylene (ETFE). During the winter, the material gives natural sunlight to the field and helps the building store heat.

If the designers had used steel, the project would've cost $3 million more, according to Evans.

Evans said that Super Bowl spectators will "feel like they're outside" without bearing the cold. Meteorologists predict that the game will have a kick-off temperature of 3 degrees Fahrenheit.

This year's Super Bowl is expected to be the coldest on record, according to USA Today.

Evans adds that his team aimed for the US Bank Stadium to not become a "border vacuum" that encourages vacancy in the surrounding area on non-game days.

The project is part of a larger redevelopment called the Big Build, which consists of a shopping and pedestrian street, thousands of housing units, a light rail station, and a 4.2-acre urban park. It will be complete in 2025.

The venue connects the city's existing skyways, an 8-mile system of enclosed walkways that lead to public transit and downtown.

"The stadium project’s focus wasn’t ever about a singular, crowning football game," Evans said. "While it’s anchored by a large stadium, [the site] also creates a new landscape that will catalyze a more walkable, transit-friendly neighborhood — an example of how a stadium project can benefit an entire city."

(Photo by Rob Carr/Getty Images)
Up Next