East Village bar bans the use of the word ‘literally’ 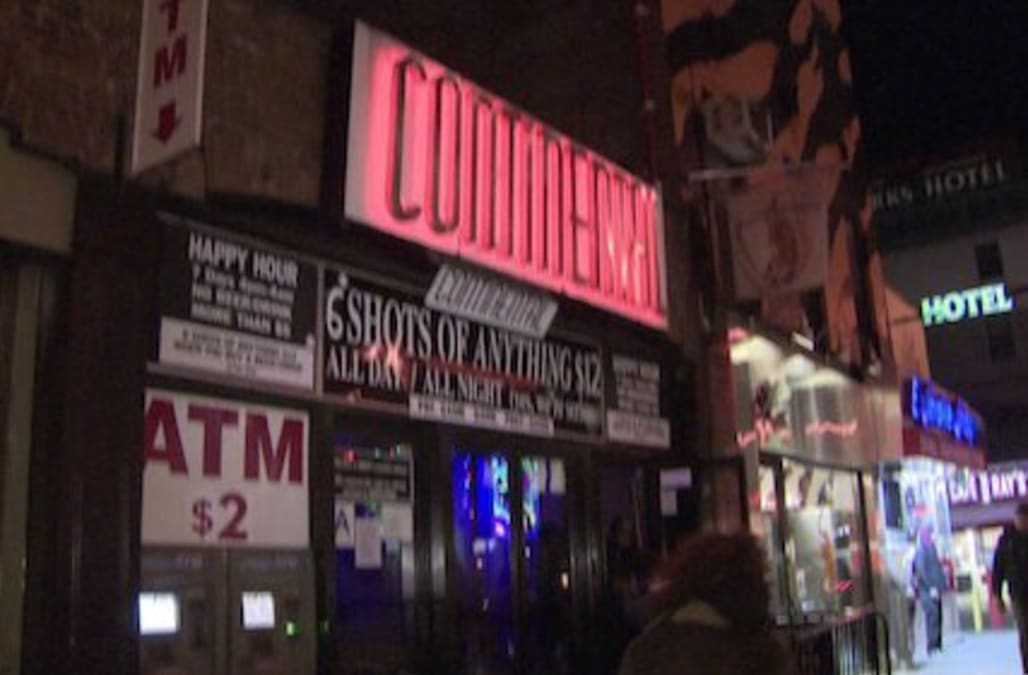 EAST VILLAGE, Manhattan (WPIX) — The signs are both on the outside and inside of Continental at Third Avenue in Saint Marks Place.

“Sorry, but if you say the word ‘literally’ inside Continental, you have five minutes to finish your drink and then you must leave.

If you actually start a sentence with ‘literally ‘you must leave immediately.”

Those downing six shots for $12, like these two Wall Street Journal reporters, were amused.

“I am pretty sure every time I use it, it is edited out of my copy, literally,” Lillian Rizzo, Continental customer told PIX11.

“I was a little worried because it happens in my speech all the time I’ve said ‘literally’ twice and so far they haven’t thrown me out,”Michael Wursthorn, Continental customer, told PIX11.

Like "no kardashianism," "no tap water because we’re running out of plastic cups," "this is not a public place so we can throw anyone out" and my favorite, "the customer is always wrong."

The owner, a real New York character named Trigger Smith, is on a two-week meditation and silence retreat but was able to text PIX11 News a comment:

“My ban is tongue in cheek. It’s fake news.

I’m just trying to shake things up a little and possibly enlighten people to be a little more respectful of the English language.

We are not Literally throwing people out. Yet! :)”

10 Foods And Drinks Banned In America

Are you eager to know more foods and drinks that are banned in America? Read on!

Unpasteurized milk, or raw milk, is widely consumed throughout the world, but it's banned in several American states as it has been linked to the spread of the E. coli bacteria. At the moment, 17 states have a total ban on raw milk for human consumption, while others have partial bans on sales.

The traditional Scottish staple Haggis has been banned in America since 1971, as the USDA put a restriction on eating one of its main ingredients, sheep’s lung. The dish, a savory "pudding," also includes ingredients such as sheep's heart and liver, and is cooked in a sheep's stomach.

The Sardinian specialty Casu Marzu, or "Maggot Cheese," is prepared by letting a type of cheese fly lay eggs in pecorino cheese, promoting advanced fermentation. As the larvae hatch and eat through the cheese, it softens, and is ready to be eaten. The possible health risks of eating larvae, as well as the fact that the cheese is unpasteurized, makes it illegal in the U.S. In Italy, it remains legal due to its status established by the European Union as a "traditional food."

Sassafras oil, an oil taken from the bark of the sassafras tree, used to be an ingredient in root beer. But after research showed that the ingredient could cause cancer, a ban on sassafras oil was set in effect in the 1960s.

The Taiwanese food-specialty of pig's blood and rice mixed together and put on a stick is banned by the USDA, as the preparation method is considered "unsanitary." Still, tourists and locals seems to enjoy this dish, but for now — not in the U.S.

Shark fins are a Chinese delicacy, but the often cruel fishing methods — slicing, or "finning," the shark’s fin and letting the shark back in the water to die — has raised opposition for the sales of the food item. In America, finning is illegal, but imported shark fins are still allowed except in California, where a total ban on both sales and distribution is in place.

The Japanese blowfish, fugu, is highly toxic, and can easily be fatal if prepared wrong. Despite this (or perhaps because of it?) it’s considered a delicacy in Japan. If you dare, a few places in America do serve blowfish, but it is illegal to sell, harvest, or serve fugu without a license. In Europe, the fish is totally banned.

Absinthe was long banned in the U.S because of a compound called thujone, which is toxic in excessive amounts. The elixir is also believed to be hallucinogenic. Though absinthe is technically legal in the country today, there is a rule stating that it must be thujone-free — something that might be hard to control.

Until recently, the U.S government held a ban on "slaughtering horses for human consumption," but has now given permission for one slaughterhouse in New Mexico to reopen. Several more slaughterhouses have filed requests with USDA for similar permits, but for now, strict inspections must be passed for those wanting legal authority to sell horse meat. In parts of Asia, Latin America, and Europe, horse meat is not an uncommon ingredient in the kitchen.

Foie gras, often considered a luxurious delicacy, has recently been surrounded by controversy, as California has upheld its law banning the sales of foie gras made from force-fed geese. Animal rights groups are now working on getting a ban in effect in the rest of the country, starting with New York. But for now, the rest of the country, and most of the world, can still enjoy foie gras without breaking the law.