Sheriff: No charges anticipated against girlfriend of Las Vegas shooter 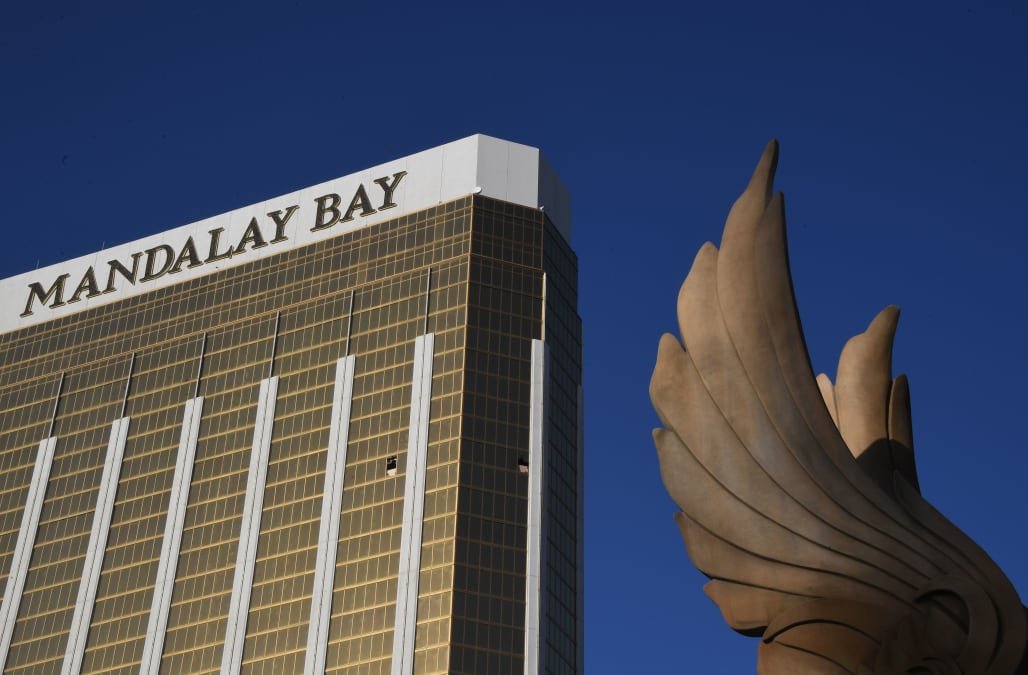 Jan 19 (Reuters) - The sheriff of the Las Vegas Metropolitan Police Department said on Friday he does not foresee charges being filed against the girlfriend of Las Vegas gunman Stephen Paddock, who fatally shot 58 people last October.

"We do not anticipate charges being brought forward against Marilou Danley," Clark County Sheriff Joseph Lombardo, who oversees the Las Vegas police department, said as he announced the release of a preliminary investigative report.

Danley, through her attorney, said on Oct. 4 that she told the FBI she had no idea Paddock was "planning violence against anyone." Her attorney, Matt Lombard, could not immediately be reached to comment.

Danley became a focus of the investigation for having shared his retirement community condo in Mesquite, Nevada, northeast of Las Vegas, before leaving the United States for the Philippines in mid-September.

Thursday: Stephen Paddock checks into the Mandalay Bay Resort and Casino on the south end of the Las Vegas Strip.

Paddock booked a two-room suite on the 32nd floor, with a clear view over the Route 91 Harvest festival taking place the other side of South Las Vegas Boulevard, the road known as the Strip.

He arrived Thursday, the day before the festival started. He would launch his attack Sunday evening, in the final moments of the concert.

Paddock transports huge quantities of weapons and ammunition into his room.

The Las Vegas police say they found 23 guns and thousands of rounds of ammunition in his room.

Nevada gun laws are among the most permissive in the US, but Mandalay Bay itself says firearms are "strictly prohibited" on its premises.

At a press conference after the shooting, Clark County Sheriff Joseph Lombardo said Paddock took "in excess of 10" suitcases to his room.

Paddock's movements between checking in Thursday and opening fire Sunday night are so far unclear.

According to Fox News, the country star Jason Aldean went onstage at 9:40 p.m. on the night of the shooting. He played for half an hour before the shooting began.

He escaped unharmed and later paid tribute to his fans who were hurt and killed.

Using multiple rifles, Paddock rained bullets on the crowd of 22,000 people below him.

The first official word appears to have been an officer using a police radio to alert a colleague. According to Reuters, a voice could be heard saying: "We got shots fired! It sounded like an automatic firearm."

Twenty-four hours after the shooting, the death toll stands at 59, with more than 500 people injured either by bullets or by trying to escape them.

Citing police radio transmissions, The New York Times said the police started to zero in on the upper floors of Mandalay Bay about five minutes after the shooting began.

Here are two lines where officers realise what is happening, both time-stamped 10:13 p.m.:

"It's coming from like the 50th or 60th floor, north of the Mandalay Bay! It's coming out a window.

"We're seeing local flashes in the middle of Mandalay Bay on the north side, kind of on the west tower but towards the center of the casino, like one of the middle floors."

Officers begin to search the hotel.

One of the earliest records of the shooting is this tweet from the user @GLOKMIN.

It isn't clear how long Paddock was firing for. The New York Times cites police radio at 10:20 p.m. as saying "it's been a while since we've heard any shots."

But a separate timeline compiled by Newsweek reports an officer near the concert venue as saying the area was "still taking fire" at 10:21 p.m.

It would be almost another hour, however, until officers would break into Paddock's room. He appeared to have stopped shooting by this point.

Taxi drivers in the area received a message direct from the police at 10:25 p.m. telling them to avoid the Mandalay Bay area.

Further police radio transmissions suggest that Paddock shot a hotel security guard who was trying to approach his room. The man was injured in the leg, according to The New York Times.

Reuters reported that minutes after the alert to cab drivers, the police started herding people inside Mandalay Bay to get them out of the line of sight of the gunman.

Half an hour after the attack began, the Las Vegas Metropolitan Police Department wrote on Twitter that it was investigating an ongoing shooting.

One hour, 12 minutes after the first shots were fired, a police SWAT unit detonated an explosive device to break down Paddock's door, according to accounts by The Guardian and The New York Times.

By this time, authorities said, Paddock had already killed himself.

According to Newsweek, officers asked permission to enter Paddock's room sooner but were told to wait for SWAT teams.

Two minutes before midnight, and almost two hours after the first shots were fired, the Las Vegas police tweeted confirmation that "one suspect is down."

It was not until 31 minutes past midnight — more than an hour since Paddock was found dead — that the police department sent a follow-up tweet saying it thought the dead man was the only attacker.

Two hours, 23 minutes after it began, the massacre was officially over.

(Photo by David Becker/Getty Images)
Up Next

Lombardo also said police still do not know why shooter Stephen Paddock strafed an outdoor concert on Oct. 1, 2017, with gunfire from his 32nd-floor suite of the Mandalay Bay hotel on the Las Vegas strip.

"This report is not going to answer every question or even answer the biggest question as to why he did what he did," Lombardo said of Paddock, adding that FBI behavioral analysts were still investigating.

Paddock did not leave behind a suicide note or a manifesto explaining his actions, Lombardo said. However, the sheriff added a large loss of money by Paddock just before the shooting could be a factor.

He also said the FBI has an ongoing case against an individual of federal interest, without providing further detail on that person. FBI officials could not immediately be reached for comment.

Paddock is still believed to be the only suspect involved in the shooting, Lombardo said. "There was only one person responsible and that was Stephen Paddock," he said.

The release of the more comprehensive final report is not expected until closer to the end of this year, Lombardo said.

In addition to the 58 killed, Lombardo said 422 were injured by gunfire and the total number of injuries associated with the incident was 851. (Reporting by Keith Coffman in Denver; Editing by Phil Berlowitz and Susan Thomas)

More from Aol.com:
Las Vegas gunman emailed about bump stocks months before rampage: documents
Redditors rework old photo of Donald Trump to hilarious effect
Our gambling guide to the best bets for the NFC and AFC Championships this weekend