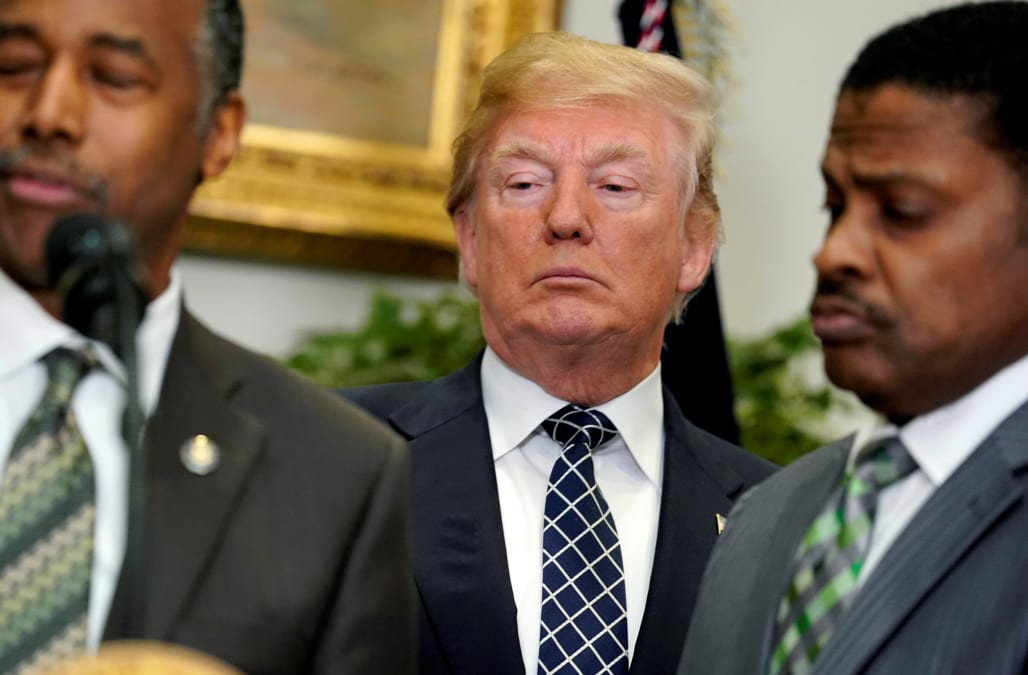 Congressional leaders are running out of time to get a deal to avoid a government shutdown, and President Donald Trump isn't making things any simpler.

Come the stroke of midnight and the start of Saturday, January 20, the federal government will enter a partial shutdown if no bill is passed to fund operations.

With little more than three days to go, Republicans and Democrats remain divided on a number of issues including spending caps and immigration. Not helping matters is a fight over Trump's alleged inflammatory and racially-charged comments about Haiti, El Salvador, and Africa.

There is still a chance of another kick-the-can-down-the-road extension of federal funding, similar to delays in September and December, but the chance for a government shutdown is rising, according to policy analysts.

"This current round of negotiations is the closest we will come to a government shutdown in the Trump presidency," Ed Mills, public policy analyst at Raymond James, wrote in a note to clients on Tuesday.

There are two major sticking points for the shutdown, one related to spending and the other focusing on immigration.

The first is directly related to the funding of the government: spending caps.

Under the 2011 sequestration bill rules, the increase for defense and non-defense spending are set in advance and congressional action is required to fund the two sides of the government at levels higher than prescribed.

Once these caps are agreed to, congressional appropriators — staffers with a focus on budgeting — can get to work on divvying up the money to individual programs.

The second, thornier issue is over the Deferred Action for Childhood Arrivals (DACA) immigration program. DACA is an Obama-era initiative to protect from deportation undocumented immigrants who came to the US as minors.

Trump announced an end to the program under executive authority in September, requiring Congress to codify the program by March or put over 700,000 DACA recipients at risk of deportation.

Republicans are angling to include a slew of other conservative immigration priorities with any deal on DACA and want the issue addressed outside of the funding bill. Democrats, on the other hand, want a more straightforward solution to DACA and want it attached to the spending bill to give it a higher probability of passing, since GOP hold outs would be less inclined to vote it down if it meant shutting down the government.

According to reports, the two sides are still far away on these core issues — leaving the door open for a shutdown.

Isaac Boltansky, a policy analyst at research firm Compass Point, wrote in a note to clients Tuesday that given the short amount of time to settle these issues and a lack of agreement, there is little chance to solve the DACA issue this week, increasing the chances of a shutdown.

"At this point, lawmakers are unable to solve key policy conundrums — including spending caps, DACA, health care, and disaster assistance — prior to Friday's deadline," Boltansky wrote. "Therefore, the only hope of avoiding a government shutdown at the end of the week is yet another short-term punt."

Throwing a wrench into the negotiations is the president, who inflamed tensions over the past week and added another distraction from the talks.

It started on Thursday, when reports surfaced that Trump called Haiti, El Salvador, and African nations "shithole countries" (or "shithouse countries") during a meeting about DACA on Thursday. This ignited tensions with Democrats and made the road to agreement harder.

Over the weekend, Trump added on to the distraction when he hurled insults at Democrats via Twitter over the DACA issue and attacked Democratic Sen. "Dicky Durbin" for confirming his "shithole" comments.

This means that in less than a week, Trump used what many Democrats are calling racist language, suggested Democrats are negotiating in bad faith, and attacked a senior member of the Democratic conference, all of which do not sow the seeds of bipartisan cooperation.

The easiest thing to do for GOP negotiators to avoid a politically damaging shutdown would be to kick the can down the road on the shutdown to buy more time.

House Speaker Paul Ryan has already told reporters that a short-term bill with new spending cap levels will likely be necessary to give appropriators time to divvy up the funding for a huge number of programs.

This could push the next deadline for a shutdown into February and could also give congressional leaders more time to work out the differences on DACA.

"While the precise path to passage remains uncertain and serious hurdles lie ahead, there is still a general belief that lawmakers will reach an 11th hour deal punting the funding deadline into February," said Boltansky.