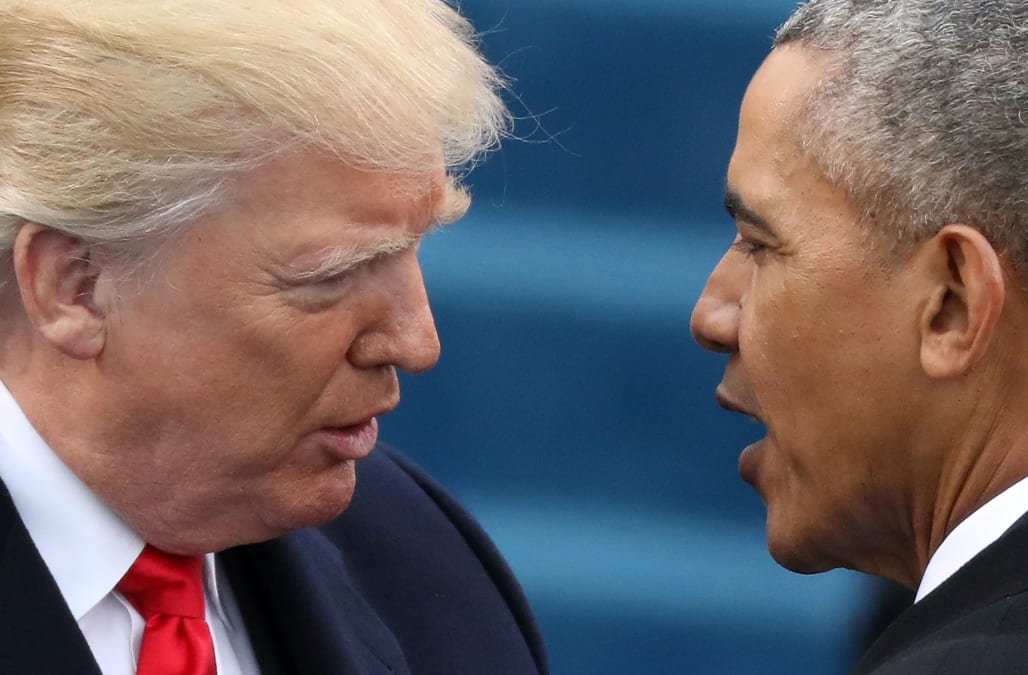 President Trump touted the economic findings of a new poll that largely credited his predecessor for the success — and questioned his fitness to be in the Oval Office.

“In new Quinnipiac Poll, 66% of people feel the economy is “Excellent or Good.” That is the highest number ever recorded by this poll.” Trump tweeted Thursday morning, after bashing the controversial dossier detailing possible conflicts of interest with Russia.

In new Quinnipiac Poll, 66% of people feel the economy is “Excellent or Good.” That is the highest number ever recorded by this poll.

The percentage was indeed the highest since Quinnipiac first posed the economy question in 2001, the school said Wednesday when it released the poll.

But 49% of voters believe President Obama deserves the credit for the booming economy, compared with the 40% who think it’s because of Trump.

“President Trump can hang his hat on the economy, but must share the hat rack with President Barack Obama, as two-thirds of the country see the economic picture as excellent or good,” Tim Malloy, assistant director of the Quinnipiac University Poll, said in a press release Wednesday.

The gist of the poll focused on how 1,106 voters from across the country viewed Trump’s ability to hold office between Jan. 5 and Jan 9.

It covered the period in which author Michael Wolff questioned Trump’s mental health as his tell-all book “Fire and Fury: Inside the Trump White House” caused a stir in Washington.

A majority 53% of voters thought Trump was intelligent, but it was the lowest score Americans gave him since his inauguration a year ago, Quinnipiac noted.

And a whopping 69% thought he wasn’t level-headed, and 57% don’t think he’s capable of being President, the poll found.

The commander-in-chief also fired off a pair of tweets Thursday attacking Democrats and the dossier compiled during the campaign by ex-British spy Christopher Steele.

Congressional Republicans have argued in the last few days that the document was potentially used by the FBI to probe the Trump campaign with a warrant under the Foreign Intelligence Surveillance Act.

“Disproven and paid for by Democrats “Dossier used to spy on Trump Campaign. Did FBI use Intel tool to influence the Election?” @foxandfriends Did Dems or Clinton also pay Russians? Where are hidden and smashed DNC servers? Where are Crooked Hillary Emails? What a mess!” Trump tweeted earlier Thursday.

The Clinton campaign and DNC did pay research firm Fusion GPS to continue work on the dossier, which was originally commissioned by the conservative Washington Free Beacon newspaper.

Trump also took aim at the FISA Act — whose warrants are used in foreign intelligence gathering — which Congress is set to reauthorize.

““House votes on controversial FISA ACT today.” This is the act that may have been used, with the help of the discredited and phony Dossier, to so badly surveil and abuse the Trump Campaign by the previous administration and others?” Trump tweeted.