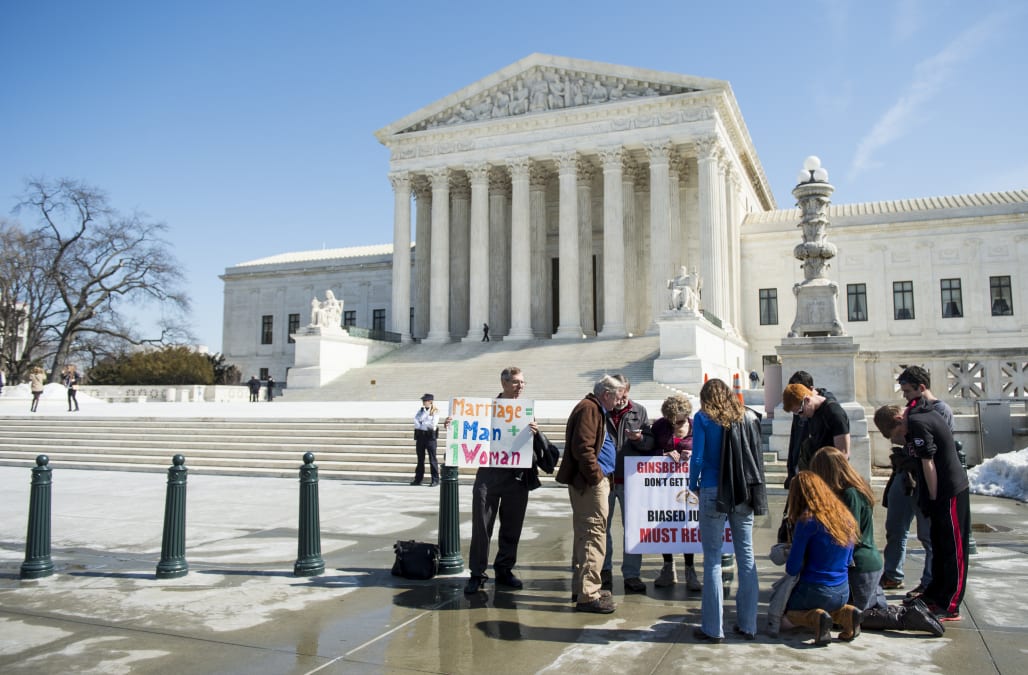 WASHINGTON, Jan 8 (Reuters) - The U.S. Supreme Court on Monday ended the first legal challenge to a Republican-backed Mississippi law that permits businesses and government employees to refuse to serve lesbian, gay, bisexual and transgender people because of their religious beliefs.

The justices left in place a June ruling by the New Orleans-based 5th U.S. Circuit Court of Appeals that the plaintiffs - same-sex couples, civil rights advocates including the head of the state NAACP chapter, a church and others - did not have legal standing to bring the lawsuit.

The law, passed by the Republican-controlled state legislature and signed by Republican Governor Phillip Bryant with the backing of conservative Christian activists, has not yet been implemented and more legal challenges are expected, according to gay rights lawyers.

"We will keep fighting in Mississippi until we overturn this harmful law, and in any state where anti-gay legislators pass laws to roll back LGBT civil rights," said Beth Littrell, a lawyer with gay rights group Lambda Legal.

7 PHOTOS
The running of the interns, Supreme Court
See Gallery

People who are refused service once the law is in place may be more likely to be judged to have legal standing to sue.

The 2016 law was passed in the aftermath of the U.S. Supreme Court's landmark 2015 ruling legalizing same-sex marriage nationwide.

Supporters call it a religious liberty law that protects the sincerely held religious beliefs and moral convictions of individuals and businesses. Opponents said it authorizes discrimination against LGBT people in violation of the U.S. Constitution's guarantees of equal protection under the law and the separation of church and state.

"Good laws like Mississippi's protect freedom and harm no one," said Kevin Theriot, one of the group's lawyers.

Mississippi's law was one of a series of measures proposed in socially conservative, Republican-dominated states that gay rights advocates viewed as an attempt to undermine the high court's gay marriage ruling.

The law, called the Protecting Freedom of Conscience from Government Discrimination Act, protects the beliefs that marriage is the union of one man and one woman, sex outside such a marriage is improper and gender is determined by anatomy and genetics at birth and cannot change.

Among other things, the measure lets businesses refuse to provide marriage-related services to same-sex couples and allows judges, magistrates and justices of the peace to refuse to perform same-sex weddings.

The measure was blocked in 2016 by a Mississippi-based federal judge who said it unconstitutionally allowed "arbitrary discrimination" against LGBT people and unmarried people. The 5th Circuit overturned that ruling.

On a related issue, the Supreme Court is due to rule by the end of June whether a Colorado baker was within his constitutional rights to refuse to make a wedding cake for a gay couple on the basis of his conservative Christian beliefs.

Supreme Court landmark cases
Demonstrators carrying giant keep abortion legal buttons & ...protect Roe vs. Wade sign during huge pro-choice march. (Photo by Cynthia Johnson/The LIFE Images Collection/Getty Images)
1966: Since 1966 police have to advise a suspect that they have the right to remain silent and the right to counsel during interrogation. The so called 'Miranda Warning' after Ernesto Miranda who had a retrial because he was not so advised. (Photo by MPI/Getty Images)
1963: Petitiion by Clarence Earl Gideon to the Chief Justice of the United States against a sentence imposed by a Florida court because he had not had legal representation. This resulted in the 5th Amendment whereby any individual accused of a crime is guaranteed 'due processes of law'. (Photo by MPI/Getty Images)
African American students at a segregated school following the supreme court case Plessy vs Ferguson established Separate But Equal, 1896. (Photo by Afro American Newspapers/Gado/Getty Images)
(Original Caption) This sketch shows White House Watergate Attorney James St. Claire arguing before the Supreme Court over whether President Nixon could assert executive privilege in withholding evidence demanded by Special Prosecutor Leon Jaworksi in the Watergate cover-up trial. The Justices are (L to R), Chief Justice Warren Burger; William Brennan; Byron White; Henry Blackmun; and at right is the chair normally occupied by William Rehnquist, who withdrew from this case.
Supporters of gay marriage wave the rainbow flag after the U.S. Supreme Court ruled on Friday that the U.S. Constitution provides same-sex couples the right to marry at the Supreme Court in Washington June 26, 2015. The court ruled 5-4 that the Constitution's guarantees of due process and equal protection under the law mean that states cannot ban same-sex marriages. With the ruling, gay marriage will become legal in all 50 states. REUTERS/Joshua Roberts
(Original Caption) Schenectady, New York: Despite a ruling from Education Commissioner Ewald B. Nyquist that prayer meetings in school are 'constitutionally impermissible,' several Mohonasen High School pupils continue to hold 10 minute prayer session at the school. The school board gave permission for the meetings even though the 1963 U.S. Supreme Court decision ruled out prayer in public schools. Comm. Nyquist's ruling upset the school board's permission for the meetings, but the students, who pointed out that Congress and the state legislature open with prayers, decided to keep up the practice.
Up Next