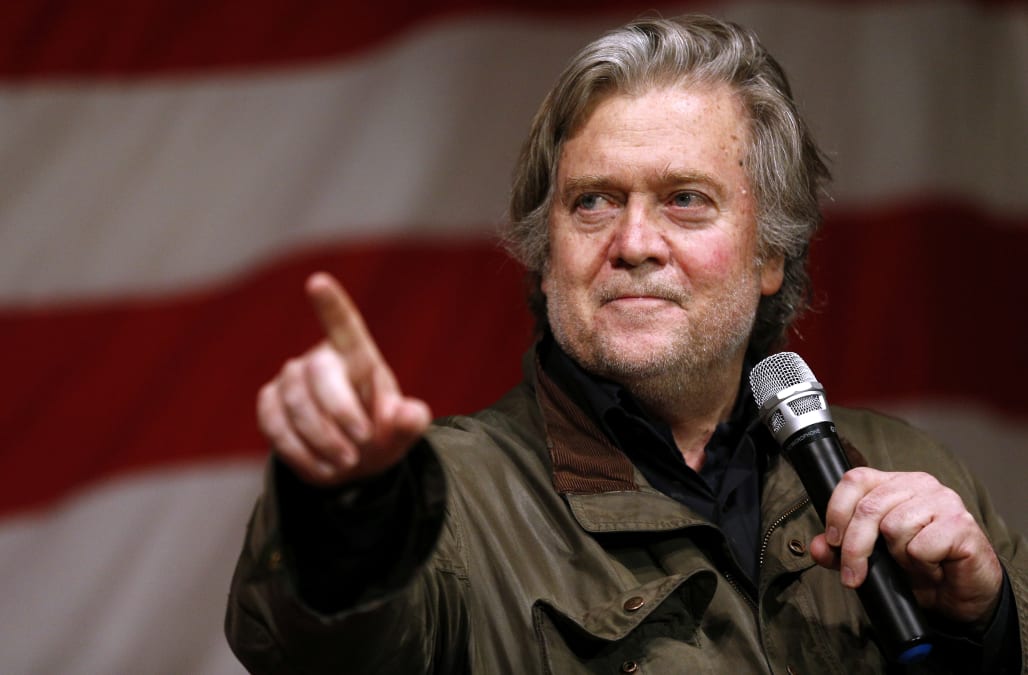 Steve Bannon still thinks President Trump is a “great man,” despite getting a cease-and-desist order from the commander-in-chief’s legal team.

“The president is a great man,” Bannon said on Sirius XM radio’s “Breitbart News Tonight” late Wednesday. “You know I support him day in and day out.”

Bannons infallible support of Trump came after a caller asked about the President’s statement earlier in the day that his ex-pal had “lost his mind.”

There is “nothing will ever come between us and President Trump and his agenda” and “we're tight on this agenda as we've ever been.”

The remarks capped off a heated day in which Trump seemed to sever all ties with a man who was his closest wires.

The rift began after excerpts from “Fire and Fury: Inside the White House” detailed Bannon lambasting Donald Trump Jr. for his controversial June 2016 meeting with a Russian lawyer.

The 64-year-old former Goldman Sachs banker was nudged out of his role as White House chief strategist in August, returning to his top perch at Breitbart News.

Trump issued a full-throated statement denouncing Bannon, who led the ex-businessman’s campaign during its final months.

“Steve Bannon has nothing to do with me or my presidency,” Trump said. “When he was fired, he not only lost his job, he lost his mind.”

Spicer did not have the strongest start to his time as press secretary. On Trump’s first full day as president, Spicer was dispatched by his boss to insist that the crowd the previous day was “the largest audience to witness an inauguration, period.” Aerial photos of the event compared with both inaugurations for Barack Obama clearly showed otherwise, and the data — both in official estimates and in public transportation use — indicated the same. Trump called the National Park Service personally in order to find proof that his crowd size was larger, but none existed. The disagreement between the White House and the NPS led to a monthslong investigation by the agency’s inspector general, which found no improprieties in the Park Service actions.

Trump put a lot of responsibility on his son-in-law from the start, placing the real estate heir in charge of everything from solving the Israel-Palestinian conflict to reorganizing the federal government with business school savvy. Kushner has yet to achieve any of those goals. He’s also struggled with accurately filling out the paperwork necessary to work for the federal government. After initially submitting the SF-86, Kushner had to update it in April to include a meeting with Russian ambassador Sergey Kislyak, a misstep his lawyer called an “error.” The errors continued, with Kushner eventually supplementing the list three times with 100 additional foreign contacts. Democrats asked for Kushner’s security clearance to be revoked, and the heat turned up as reports surfaced that he and wife Ivanka Trump were using a private email server and that his family was attempting to sell visas in China. The head of the government bureau that processes background checks said in regard to the White House adviser’s forms that he had “never seen that level of mistakes,” which is potentially problematic because the forms warn that those who submit false information could be charged with a federal crime and face up to five years in prison.

Kushner wasn’t the only one to have a bout of amnesia when filling out forms. Treasury Secretary Steve Mnuchin initially failed to disclose nearly $100 million in assets while neglecting to mention his role as director at an investment fund in a tax haven.

As investigations into Russia’s potential effect on the 2016 election turned to Paul Manafort, Spicer wanted to make it clear that the lobbyist and operative did not play a prominent role in the campaign. “Obviously there’s been discussion of Paul Manafort, who played a very limited role for a very limited amount of time,” said Spicer during a March 20 briefing.

Manafort was the chairman of the Trump campaign, a position he held from May to August 2016, although former campaign manager Corey Lewandowski told the Associated Press that Manafort was in operational control of the campaign starting April 7.

The curious case of the vice president

Since Trump became president-elect, there are two ways to look at Mike Pence’s public statements about the campaign’s potential ties to Russia, which have had to be corrected on several points. The explanation by Pence and his staff is that the former congressman and governor was in the dark about a number of issues. But Democratic lawmakers investigating the 2016 campaign are asking questions about what exactly Pence knew, and when.

In interviews, Pence initially dismissed the idea that former national security adviser Mike Flynn had discussed lifting sanctions on Russia with Russian Ambassador Kislyak. Flynn has since admitted that the subject did come up, however, and Pence’s office has said the vice president was simply misled by Flynn, who also lied to the FBI. But Pence has also pleaded ignorance about law enforcement looking into other shady deals potentially involving Flynn. The New York Times reported that Flynn told the transition team that he was under investigation for his work for the government of Turkey two weeks before he was nominated to his extremely sensitive post. An administration official told CNN that despite running the transition team, Pence wasn’t aware until March.

Pence also dismissed the idea that the campaign had any ties to WikiLeaks, telling Fox News in October 2016 that “nothing could be further from the truth.” In November, the Atlantic published a series of direct messages between Donald Trump Jr. and the WikiLeaks Twitter account that occurred two months before the election, proving there had at least been some contact. Pence’s team released a statement saying he had just learned of the communication with the release of the story. So far the strategy of pleading ignorance seems to be keeping Pence out of special counsel Robert Mueller’s sights, but some legislators are seeking answers about the specifics of what Pence knew and when.

The deaths of four U.S. service members in Niger spun into a weeklong controversy that damaged the credibility of chief of staff John Kelly. After initially avoiding an extended statement on the deaths, Trump declared that previous presidents hadn’t contacted gold star families, a statement immediately refuted by members of prior administrations. Rep. Frederica Wilson, D-Fla., then stated that the family of Sgt. La David Johnson found some of the comments Trump made to them in his call to be disrespectful. The president called Wilson a liar and said he had proof, but Johnson’s family supported her account.

Kelly, a gold star father whose son died in Afghanistan, was then called in to defend Trump. The general attacked Wilson’s character, misrepresenting a speech she had given in 2015 to portray her as a showboating publicity seeker. Video of Wilson’s speech showed Kelly was wrong, but the White House didn’t back down. Kelly said he stood by his statement and would “absolutely not” apologize. Sanders said it was “highly inappropriate” to question Kelly in any way because he was a four-star Marine general.

Godwin’s law in the briefing room

Godwin’s law states that the longer an online conversation goes, the more likely someone will eventually be compared to Hitler. This does not usually apply to the White House briefing room, but 2017 was not a usual year. In an April briefing, Spicer turned to the genocidal German leader when discussing a gas attack in Syria, saying, “You had someone as despicable as Hitler, who didn’t even sink to using chemical weapons.” Considering Hitler’s regime used poison gas to murder millions of people in concentration camps, a reporter offered Spicer the opportunity to clarify. He made it worse, saying “[Hitler] was not using the gas on his own people in the same way that [Syrian President Bashar] Assad was doing.”

In May, the president posted a short, sweet, late-night tweet that read, “Despite the constant negative press covfefe.” The apparent typo of “coverage” lingered for a few hours before being deleted, with Trump adding “Who can figure out the true meaning of “covfefe” ??? Enjoy!” That would have been that, save for Spicer’s apparent conclusion that it was unacceptable to admit that the president had simply mistyped. “The president and a small group of people know exactly what he meant,” said Spicer when asked about it at the daily briefing, an unnecessarily cryptic response. The mystery surrounding covfefe was thankfully short-lived, but the White House’s response will stand as its most pointless cover-up.

After the less than flattering portrayal of life in the White House came out, a Trump attorney hit Bannon with a cease-and-desist letter.

The lawyer told the unkempt right-wing strategist that he broke the conditions of a nondisparagement accord with the Trump Organization.

Trump Jr. also took another swipe at Bannon’s tenure in the administration.

“Steve had the honor of working in the White House & serving the country. Unfortunately, he squandered that privilege & turned that opportunity into a nightmare of backstabbing, harassing, leaking, lying & undermining the President. Steve is not a strategist, he is an opportunist,” he tweeted.

Nor did he deny any of the comments in the book.