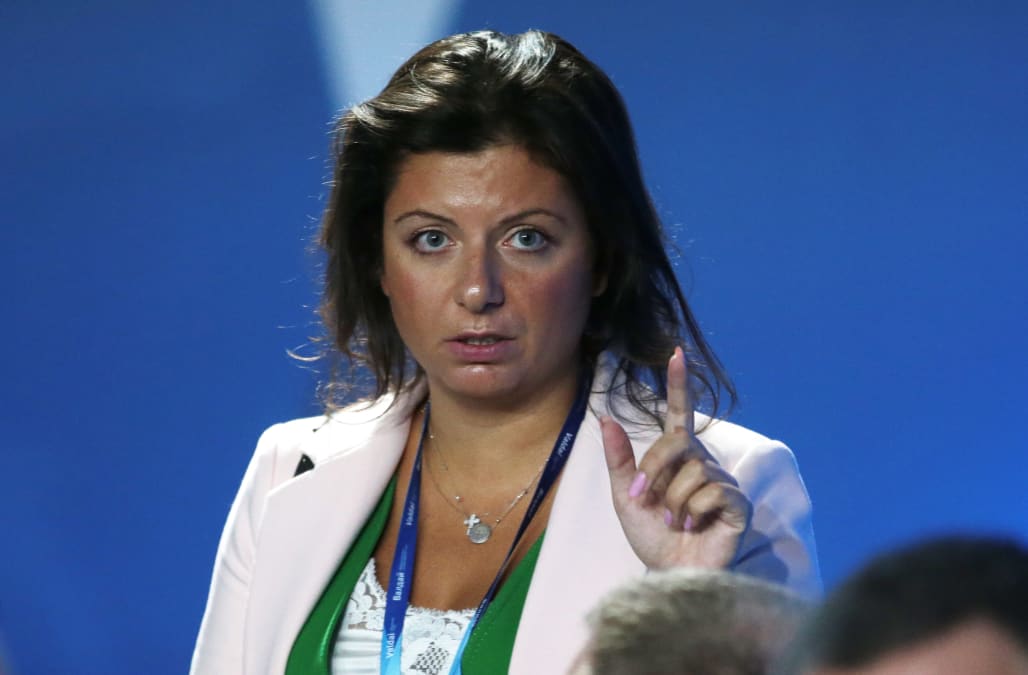 MOSCOW — The boss of a Kremlin-funded news organization accused of playing a role in Russia’s alleged interference in the 2016 U.S. election says she hopes the deep rift between Moscow and Washington can be mended.

Margarita Simonyan has been editor-in-chief of RT — formerly known as Russia Today — for more than a decade.

But until recently, few had heard of her outside Russia.

Then her name was mentioned 27 times in a report by U.S. intelligence agencies that was published in January. It described RT as the “Kremlin’s principal international propaganda outlet" and said it "served as a platform for Kremlin messaging to Russian and international audiences."

It alleged that government-financed RT America sought to "influence politics [and] fuel discontent" in the U.S.

Forbes magazine ranked Simonyan as the 52nd most powerful woman in the world this year — 13 places ahead of Hillary Clinton.

“I am very saddened by what is going on right now between Russia and America,” the 37-year-old Simonyan told NBC News at the network's Moscow headquarters earlier this month.

“I lived in America. I love America,” she added, referring to a year she spent as an exchange student in Bristol, New Hampshire, in 1995. “We are not Communists anymore. We have changed, but for some reason the establishment doesn’t recognize it and doesn’t give us a chance to show that we have changed. You don’t have to be afraid of us anymore.”

President Vladimir Putin's spokesman on Friday said the Kremlin views deteriorating relations with the U.S. as a major disappointment of 2017. Following allegations of meddling in the presidential election, the two countries have been exchanging tit-for-tat measures all year, ranging from restrictions on embassy staff to legislation targeting state-owned media.

RT America — the U.S. arm of the organization — was forced to register as a “foreign agent” in November, prompting a response from the Kremlin that called restrictions on Russian broadcasters in the United States an attack on free speech.

RT has never made a secret of being a Russian TV station, Simonyan said, likening it to the U.K.'s publicly funded BBC.

“I don’t understand why any country is given a chance to make its point of view seen and heard by the world, and Russia is not given that chance,” she said. "Russia is said to be propaganda for doing exactly that. We are no more propaganda than the Voice of America or Radio Free Europe is propaganda."

Simonyan, who covered the Second Chechen War and the 2004 Beslan hostage siege as a young reporter, took charge of RT when she was aged just 25.

The network has since been through a major transformation. Rebranded from Russia Today in 2009, it's now a global, round-the-clock news network with 2,450 employees around the world, seven TV channels, digital platforms in six languages and video news agency RUPTLY.

RT says 70 million people in 38 countries watch its channels every week, and its content has been viewed more than 5 billion times on its YouTube channels.

With its “Question More” slogan, RT says its objective is to identify under-reported stories that mainstream media won’t cover.

“If all the media are singing one song, it gets dangerous, it really does,” Simonyan said. “Just remember the Iraq war. It’s important to at least try and say something different.”

Asked if RT aims to influence audiences in the West, Simonyan maintains RT sets out to inform. "If you think informing is influence, then you can put it in those words."

U.S intelligence agencies disagree. A declassified version of the "Assessing Russian Activities and Intentions in Recent US Elections" report said:

However, RT anchor and correspondent Kate Partridge, 47, said she had never felt pressure to report something she was not comfortable with.

“I am allowed to object,” she said. “But I can’t think of when I have been in a situation where I felt really fiercely against something.”

But others have spoken out.

RT America anchor Liz Wahl quit on air in 2014, saying the channel "whitewashes" the actions of Russian President Vladimir Putin. "As a reporter on this network I face many ethical and moral challenges," she told viewers from her studio in Washington, D.C. "I'm proud to be an American and believe in disseminating the truth. And that is why after this newscast I am resigning."

One of her colleagues, Abby Martin, also criticized Russia’s military intervention in Crimea, calling it “wrong.” In response to Martin's comments, RT said in a statement that "contrary to the popular opinion, RT doesn't beat its journalists into submission, and they are free to express their own opinions." Martin left the channel in 2015.

Andrey Kiyashko, the 29-year-old deputy head of news at RT, dismissed allegations the network offers nothing but Kremlin propaganda.

“It is a serious allegation and I would suggest to those people to pay a bit more attention to what’s going on in their own media landscape in terms of the bias in the news before they make such accusations," he said.

Earlier this year, RT launched its FakeCheck project to “weed out and correct inaccuracies, bias, misinformation and outright falsehoods in global coverage of major news stories." However, a recent Poynter Institute analysis of the project suggested it "mixed some legitimate debunks with other scantily sourced or dubiously framed fact checks."

In October, the network also had to pull a video segment about a burger joint in New York that allegedly offered a Vladimir Putin burger, in a tribute to the president's 65th birthday and his political stature. The story was picked up by some Russian state news agencies as well.

But thanks in part to a very observant Russian journalist, the story came under scrutiny and the joint eventually refuted the existence of the celebratory burger.

RT’s video agency that published the segment deleted the video, saying that upon further review "it did not meet its editorial standards.”

Partridge also dismissed claims RT was more propaganda than journalism and said her work features "so many checks."

She added: "By definition, there is an editorial concept here to show the other side. But you can say that about any media organization.”

Partridge echoed her editor-in-chief’s remarks, saying she thinks RT, and Russia in general, are misunderstood.

“I think it’s just a fear because it’s so unknown and because of the Cold War history, because of so many things — where it gets kind of a bad press and I think it has built up almost as de facto truth.”