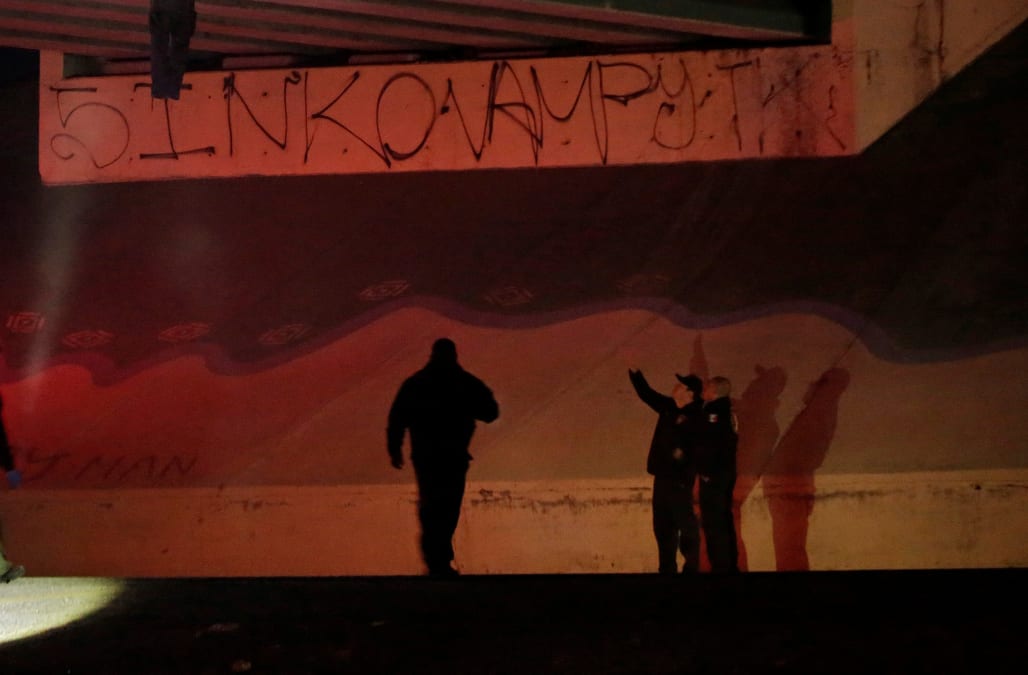 During the early morning hours of December 20, the bodies of six men were found hanging from bridges in the northwestern Mexican state of Baja California Sur, a popular tourist hub where deadly violence has risen precipitously in recent years.

Around 6 a.m., another two bodies were found hanging from a highway bridge near the international airport in the capital, La Paz, which is north of Los Cabos. There has been a sharp increase in violence — much of it attributed to fighting between organized-crime groups — in Baja California Sur over the past three years.

The 650 homicide victims in the state between January and November this year was a 223% increase and a 284% increase over the same periods in 2016 and 2015, respectively.

But the December 20 incidents were reportedly the first time bodies had been found hung from bridges in the state.

Narcomantas — public announcements by criminals that often accompany corpses — were left with the bodies.

They were attributed to the "Guzmanes y Tegoripeños" gang, and one reportedly said, in part, "This is what will happen to anyone who does not fall into line with us. It has been made more than clear that we hold all the power and that Baja north and south are ours."

Several such signs have been attributed to the gang over the past two months, threatening government officials and boasting of "a cleansing" in the area.

A sign attributed to the group also appeared in the days after Baja California Sur's human-rights ombudsman and his son were gunned down in late November.

The gang's name appears to refer to Tegoripa, a small town in Sinaloa state's Badiraguato municipality, which is where Sinaloa cartel chief Joaquin "El Chapo" Guzman was born. Guzman's surname appears to be the basis for the other half of the gang's name.

Bodies hung from bridges or other structures with narcomantas appeared frequently elsewhere in Mexico during the major cartel clashes of the 2000s and early 2010s.

Several such displays were found around Tijuana in late 2016, and a body was hung from a bridge in nearby Nayarit state a few days before the incident in Baja California Sur, part of a wave of killings in the state suspected of being organized-crime related. Narcomantas were found at the scene of several of those crimes, including at the bridge. Tourist hubs like Los Cabos have long avoided the kind of bloodshed seen elsewhere in the country during the last decade of its drug war.

But those areas have seen increasing violence in recent months.

Amid the dizzying increase in homicides through Baja California, the Los Cabos municipality, home to Cabo San Lucas, has also seen a spike: from 49 homicide cases (which can contain more than one victim) through all of 2016 to 286 through the first 11 months of this year — a 483% increase.

As of the end of the summer, increasing violence in those places, which has largely taken place outside tourist areas, hadn't appreciably affected tourist activity (though feelings of insecurity among residents have risen).

From June to August, Los Cabos saw a 6% increase in hotel occupancy compared to the previous year, as well as a 17% increase in passenger arrivals during the first nine months of the year.

Nevertheless, violence in those tourist areas did prompt the US State Department to issue a travel warning for Baja California Sur at the end of August. Quintana Roo, home to Cancun and Play del Carmen, was also included.

Many areas of Mexican have been listed for some time, but the August notice was the first time those two states had been included.

At the time, Mexican officials admitted there were areas of concern in the country, but they also said the timing of the notice could have been a sign of political maneuvers by Washington in relation to ongoing NAFTA talks.

NOW WATCH: The wives of El Chapo's henchmen reveal how they hid and spent $2 billion

SEE ALSO: Deadly violence in Mexico is at record levels, and new crime data adds to the ugly picture