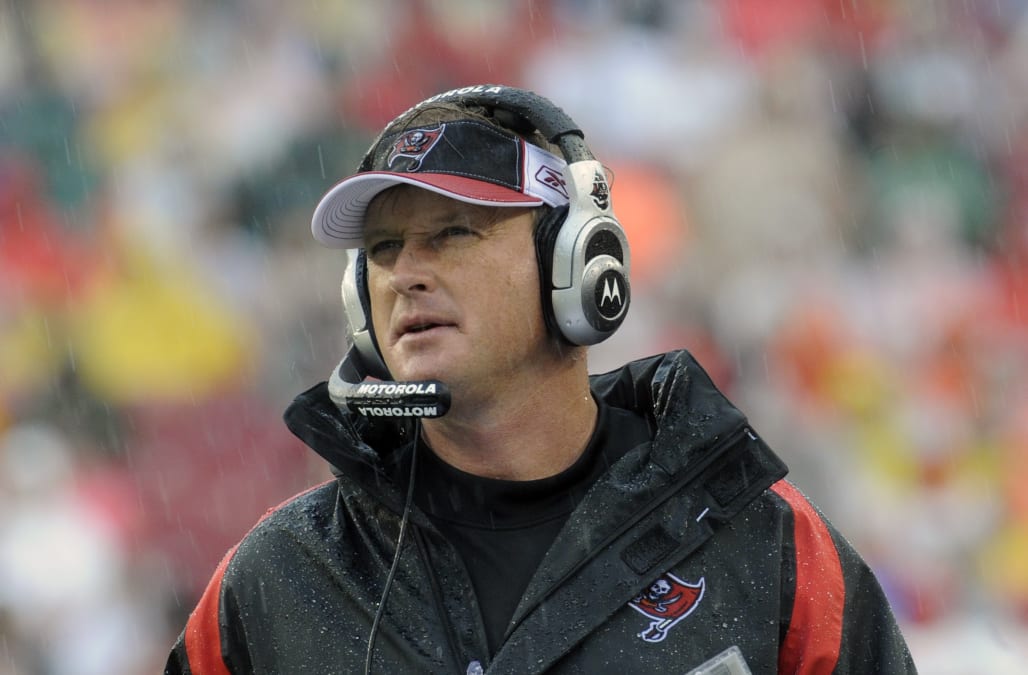 Each and every year, Jon Gruden is mentioned for various coaching vacancies at both the collegiate and NFL ranks. The “Grumors,” as they’re dubbed, usually don’t lead anywhere.

Will this year be different?

Mike Florio of Pro Football Talk suggests there’s a “growing sense in football circles” that Gruden will return to the sideline soon.

There’s a growing sense in league circles, as explained by multiple league sources to PFT over the past two days, that Gruden will return to Tampa Bay as the next coach of the Buccaneers.

Gruden was inducted in the team’s ring of honor recently and many believe he would be able to get the most out of quarterback Jameis Winston. ESPN has yet to offer Gruden a new contract, which some believe is a sign the Super Bowl-winning coach will leave the broadcast booth.

NFL coaches who could be fired during 2017 season

The 65-year-old Arians has denied rumors that he’ll retire at the end of this season. But Arians, who is only signed through 2018, might not have a say as to whether he’ll coach Arizona through the end of his contract.

The Cardinals have fallen sharply since reaching the NFC Championship after the 2015 campaign. Carson Palmer looked like a shell of himself before getting injured (again) and Arizona’s rushing attack is the worst in the NFL, having failed to replace the injured David Johnson.

But Arians, who became the winningest coach in Cardinals history last week -- with Blaine Gabbert throwing passes to the Jaguars’ stout defense, no less -- has earned a good amount of leeway in the organization.

Gase guided Miami to a surprise playoff appearance last year, but the team has floundered following the loss of quarterback Ryan Tannehill to a torn ACL during the preseason. Luring Jay Cutler out of retirement to fill in has gone about as well as chortling Bears fans expected.

The team’s 4-7 record doesn’t tell the full story here, as the Dolphins possess the league’s second-worst point differential (-115). If Miami’s current five-game losing streak extends to the end of the season, the powers that be could very well opt to move on from Gase. Then again, this is the team that gave Joe Philbin (career record: 24-28) more than three seasons at the helm.

Many predicted the Jets would finish near the bottom of the league in 2017, but they’ve actually managed to exceed expectations. Their -29 point differential is tied for 19th in the NFL.

But if New York limps to the finish line, it wouldn’t be totally surprising if the Jets cut ties with Bowles, who was fiercely criticized after the Jets went 5-11 last season.

It’d be out of character for Broncos GM John Elway to fire a coach after one season, but it’s been an absolute mess in Denver this season.

The team is 0-7 since their Week 5 bye, and that losing streak includes some truly embarrassing defeats. Which is worst -- a 23-10 setback to the previously winless Giants at home, a 51-23 blowout against the Eagles that was even more of a blowout than the score indicates, or a 41-16 beatdown from the Patriots in Denver?

The once intimidating defense has sagged to allow 25.5 points per game, which ranks 26th in the NFL. The quarterback situation got so bad, the Broncos extended an olive branch to Brock Osweiler and let him start a few games. Joseph only had one year of experience at the coordinator level prior to this season, a one-year stint as the Dolphins' defensive boss. He might be in over his head here.

Jackson was always going to be given a long leash as the Browns committed to yet another rebuild when they hired him before the 2016 season. But he’s really testing the patience of Cleveland’s brain trust.

The Browns have the worst point differential in the NFL, ranking last in points scored (15.1 PPG) and second to last in points allowed (26.3 PPG). The biggest problem is they haven’t been able to develop any of their quarterbacks, even to a level of mere adequacy -- rookie DeShone Kizer and second-year players Kevin Hogan and Cody Kessler have thrown a combined nine touchdowns and 20 interceptions this year.

It’s not like the team’s front office was expecting to compete for the playoffs this season, but it’d be hard to imagine Jackson surviving a winless campaign. If that nightmare scenario comes to fruition, Jackson would have the worst winning percentage among coaches in the Super Bowl era with at least 48 games under their belt.

Will the second-longest tenured coach in the NFL finally see his time in Cincinnati come to an end after this season, his 15th with the organization?

The Bengals rank last in the NFL in yards gained (274.3 YPG) and seem destined to miss the postseason with several tough games still remaining on their schedule. If they do, it’d be the first time since 2006-08 they’ve failed to qualify for the playoffs in consecutive seasons.

The Buccaneers were a trendy playoff pick during the preseason. However, an underachieving defense (last in the NFL with 395.5 yards allowed per game) and quarterback (Jameis Winston threw just 10 touchdowns in 8 games before injuring his shoulder) have left Tampa Bay at the bottom of the NFC South.

Koetter was promoted to head coach two years ago after serving as offensive coordinator for predecessor Lovie Smith in 2015 to provide Winston with some continuity. But Winston’s regression in his third NFL season doesn’t speak well to Koetter’s credentials.

Pagano won the war with former Colts GM Ryan Grigson, whom he battled with for years and was fired by team owner Jim Irsay in January. But Pagano might follow him out the door soon.

Indianapolis’ defense has been the worst in the league by points allowed (27.3 PPG) – not a good look for a team led by a former defensive coordinator -- and the offense is 27th (17.7 PPG) by the same measure.

The Colts have always looked pretty hapless without a healthy Andrew Luck, but at least managed .500 records the last two years. Now, the bottom has fallen out, and Pagano might pay the price for it.

The Bears are doomed to their third consecutive last-place finish in the AFC North under Fox. Even though the blame can’t be completely laid at his feet -- any coach would have trouble winning with the amount of talent on Chicago’s offense -- the team has a bit of a hopeless aura around it right now.

That shouldn’t be the case with a No. 2 overall draft pick in Mitchell Trubisky under center, but the rookie hasn’t looked like a top-shelf prospect. Chicago might opt to hire a more offensive-minded coach to help groom Trubisky in the next stage of his career.

The team's remaining home games against easy opponents in San Francisco and Cleveland feel like must-wins, and even victories in those matchups might not be enough to save Fox.

McAdoo did just about the only thing that could fire up New York’s fan base during a long-lost season -- bench two-time Super Bowl champion Eli Manning. Most Giants fans have a love/hate relationship with Manning, but they were all up in arms after McAdoo cast aside Manning for Geno Smith, of all quarterbacks, this week.

That decision only grew the chorus of voices calling for McAdoo's head, which has been present since the team's 0-5 start. The team now plans to split time at quarterback between Smith -- who already ran out of chances with one New York team -- and 2017 third-round pick Davis Webb. At this point, it seems McAdoo will only be retained if Smith or the rookie out of California provides a sustained spark for the offense, which would be shocking given the unit’s total ineptness this season.

The post Report: There’s A “Growing Sense” Jon Gruden Will Return To Coach Tampa Bay appeared first on The Spun.