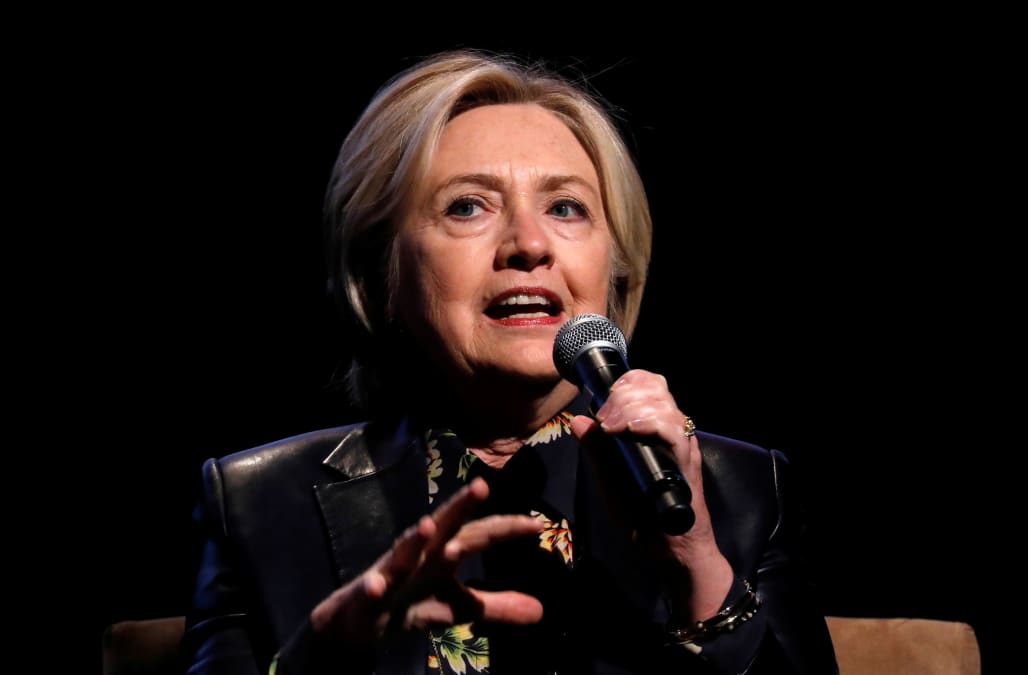 Vanity Fair staffers are ringing in the new year with Champagne and cheap shots at Hillary Clinton.

The magazine’s politics and business vertical, Hive, published a snarky video on Tuesday featuring editors and writers holding Champagne flutes while telling the former secretary of state to give up and retire in 2018.

“Take up a new hobby in the new year,” suggested Vanity Fair writer Maya Kosoff. “Volunteer work, knitting, improv comedy ― literally anything that will keep you from running again.”

Maybe it's time for Hillary Clinton to take up a new hobby in 2018 pic.twitter.com/sbE78rA5At

But Clinton’s video appears to have evoked the biggest reaction. And that may have to do with its timing. The video was tweeted less than a week after political news site The Hill reported that Clinton was focusing on elevating her political group Onward Together and considering her role in the 2018 congressional elections.

Many people were offended by Hive’s condescending tone, especially considering Clinton’s extensive political résumé. Others argued that the video was flat-out sexist.

This video is insulting. You should all be embarrassed of yourselves. Telling a woman what to do-specifically a woman of her accomplishments-is sexist and gross. Enjoy the fallout.

Hey STOP TELLING WOMEN WHAT THE F-CK THEY SHOULD DO OR CAN DO. Get over your mommy issues.

Vanity Fair tl;dr: Six young white people holding glasses of champagne would like Hillary Clinton to abandon her life's work and platform and just shut up. Good to know. https://t.co/cELDKdVmYd

Why did they think it was funny for their staff to stand around with champagne and suggest Hillary Clinton take up knitting. https://t.co/mSs4EtV3Wt

ok ok one last thing, imagine doing years of pro bono legal work in children's advocacy and being lectured by vanity fair to "try volunteering" did they even skim her wikipedia page

Clinton adviser Adam Parkhomenko also weighed in on the video, calling it “embarrassingly not funny” and “awkward to watch.”

I went to bed on Christmas not disliking @VanityFair.

Agree. It was embarrassingly not funny. And awkward to watch. I want to believe they gave each of those individuals an opt-out opportunity but they genuinely looked happy to do it.

Peter Daou, a former Clinton adviser, slammed the magazine for insulting “one of the most accomplished women in the history of the United States.”

He also pointed out that he’s ended the last three years defending Clinton from “sexist attacks.”

So @VanityFair decided that the best way to end 2017 was to take a repulsive cheap shot at @HillaryClinton, one of the most accomplished women in the history of the United States.

Kosoff, who suggested in the video that Clinton take up improv and knitting, responded to the backlash on Twitter.

Kosoff said that the staff didn’t intend to single out Clinton and pointed out that the video was a part of a series. In the New Year’s resolution video for Trump, editors told the president to delete his Twitter account and drink more Diet Coke in 2018. In Sanders’ video, they suggest she team up with Sen. Bernie Sanders (I-Vt.) for a radio show and hire Dylan “Pickle” (Trump’s 9-year-old fan who wrote a famous letter) as a contributor.

“I don’t appreciate being taken out of context to make me seem super sexist,” Kosoff tweeted late Tuesday night.

HuffPost has reached out to Vanity Fair for an official comment on the backlash.