'These people' are 'the deep state': GOP congressman calls for 'purge' of the FBI 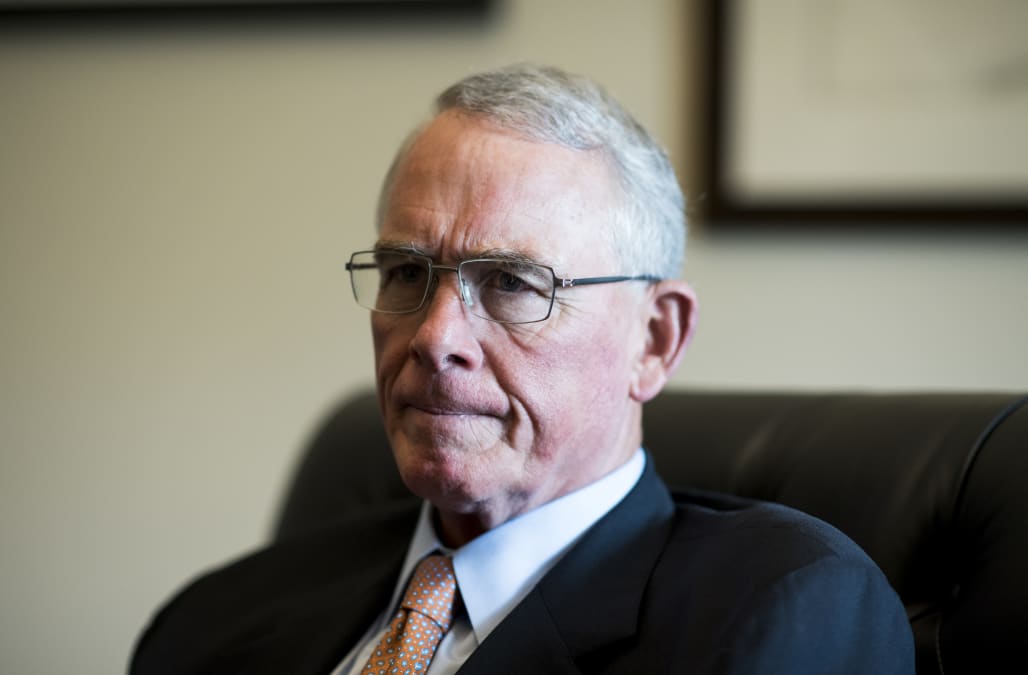 Republican Rep. Francis Rooney said Tuesday that he wants to see the upper ranks of the FBI purged of politically motivated agents who he believes are working for "the deep state."

"People have very high standards of our government agencies," the Florida congressman told MSNBC. He added that recent revelations about  the political biases of various FBI employees "undermine" his "confidence that the agencies don't respect the Constitution and will not put the ends before the means."

"That's a pretty broad brush you're painting with," she said.

Rooney then went on to list examples of the FBI putting the "ends before the means," including "with Hillary Clinton, with her $84 million of potentially illegal campaign contributions" and the Clinton Foundation's supposed involvement with the Uranium One deal.

A pro-President Donald Trump political action committee, The Committee to Defend the President, filed a complaint with the Federal Election Commission earlier this month alleging that the Democratic National Committee illegally funneled $84 million through state party chapters back to the Clinton campaign.

It is unclear how the complaint involves the FBI. The DNC has said the money came from "joint fundraising committees" in an attempt" to raise the general election funds needed to win in 2016."

There is no evidence, moreover, that the Clinton Foundation received any kickbacks when the State Department allowed Rosatom, the Russian nuclear energy agency, to acquire a controlling stake in the Canadian company Uranium One in 2010. Uranium One has mining stakes in the US.

Jackson asked if Rooney was trying to discredit the Justice Department in order to cast doubt on special counsel Robert Mueller's investigation into Russia's election interference and potential collusion between the Trump campaign and Moscow.

Rooney said that he is not trying to discredit the investigation but "would like to see the directors of those agencies purge it, and say, 'look, we got a lot of great agents, a lot of great lawyers here. Those are the people I want the American people to see'... not these people who are, kind of, the deep state."

"Well, I think that Mr. Strzok can be purged, sure," Rooney replied, referring to veteran FBI counterintelligence agent Peter Strzok.

Strzok was among those overseeing the investigation into former Secretary of State Hillary Clinton's private email server last year.

The DOJ's Office of the Inspector General (OIG), which opened an investigation in January into the FBI's handling of the email probe, discovered text messages sent by Strzok to another FBI employee, Lisa Page, during the campaign that expressed disdain for Trump and other political leaders.

As a result, Strzok was abruptly removed from Mueller's Russia probe in late July and relegated to the human resources department. Page left for unrelated reasons. The reason for Strzok's reassignment was not made public until early December, when the content of his text messages was leaked without official DOJ authorization to members of the media.

Another Florida congressman, Rep. Matt Gaetz, has alleged that Mueller and his team are staging a "coup d'etat" against Trump. Ohio Rep. Jim Jordan has called the FBI "corrupt" and claimed recently that the bureau was "putting together a plan" last year "to keep Donald Trump from becoming the next president of the United States."

Republican Sen. Rand Paul tweeted a similar assessment last week: "Time to investigate high ranking Obama government officials who might have colluded to prevent the election of @realDonaldTrump! This could be WORSE than Watergate!"

'A scalp' for the administration?

FBI critics have also seized on the recent reassignment of the FBI's top lawyer, James Baker, characterizing him as one of a swarm of anti-Trump FBI employees who have been working to take down the White House.

Anonymous House Republican sources indicated to Politico on Friday that Baker, a career national-security lawyer who served under both Republican and Democratic administrations, may have pointed Mother Jones reporter David Corn to the now-famous dossier — a collection of memos, compiled by former British spy Christopher Steele, outlining collusion between Trump and Russia. Corn was the first to report on the existence of the Steele dossier in October 2016.

The sources told Politico they could not confirm the connection and were simply investigating. Politico framed the story to suggest Baker and Corn were definitively linked, and the report drew immediate scrutiny for citing congressional GOP sources without confirming the information. It also left career national-security officials who have known Baker for years astonished and outraged.

"Sadly, we are now at a point in our political life when anyone can be attacked for partisan gain," former FBI Director James Comey tweeted on Friday. "James Baker, who is stepping down as FBI General Counsel, served our country incredibly well for 25 years & deserves better. He is what we should all want our public servants to be."

When FBI Director Chris Wray was appointed to replace James Comey after Comey was fired in May, it was widely understood that he would bring in his own team, including a new general counsel and, potentially, a new deputy.

The timing of Baker's reassignment, however — and the controversial Politico piece — has led some former Justice Department and FBI officials to wonder whether it was, at least partially, a political decision made under mounting pressure from Trump and his allies.

"The idea that Jim should stay in place indefinitely is not what I would argue," Benjamin Wittes, an expert in national security law and senior fellow at the Brookings Institution who has known Baker for years, said in a recent interview. "But, if I were Wray and I meant to replace my general counsel, the antics of the last two weeks would have convinced me not to do it under fire to make sure no one thinks I am giving the administration a scalp."