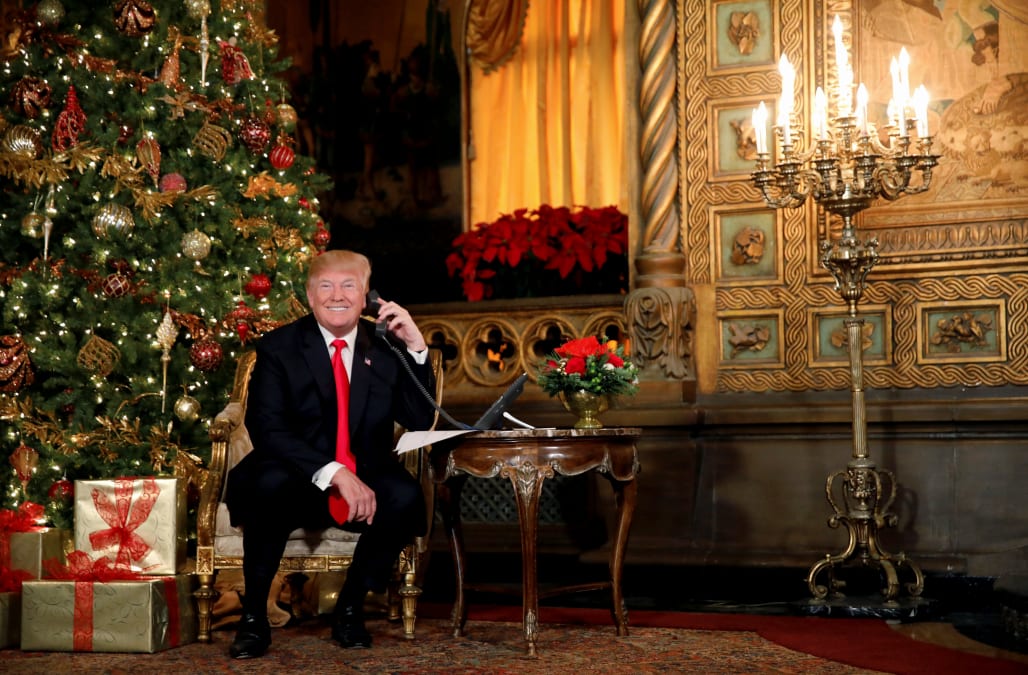 On Christmas Eve, U.S. President Donald Trump took calls from children, asking them what they wanted most from Santa, and revealing what was on his own wish list.

One boy wanted building blocks. Another wished for his grandma to get out of the hospital. And as for Trump - who has sent a series of combative tweets since arriving at his Florida vacation home - he said he wants "peace for the country."

Every year on Christmas eve NORAD purports to track the flight of Santa and his reindeer-pulled sleigh, a tradition since 1955 when a department store misprinted a phone number, sending a flood of calls to a NORAD colonel, who played along.

Sitting in a gold chair beside first lady Melania Trump in an ornate, tapestried great room, the president enthusiastically chatted with youngsters and their parents. Reporters in the room could hear only the president's side of the conversation.

RELATED: Take a look at all of the presidential Christmas cards throughout the years:

In his trademark brash style honed during a career in the New York real estate world, Trump predicted the kids would have the greatest Christmas ever.

"I'll make a prediction - Santa is going to treat you well. Really well. The best he's ever treated you," he told one child from Mississippi, throwing in an invitation to come to the Oval Office sometime.

Casper from Arlington, Virginia, was a child after Trump's own heart. "Building blocks! That's what I always liked too," the president exclaimed.

"I predict that Santa will bring you building blocks, so many you won't be able to use them all," he said.

As for Ryan, he told Trump he wanted his grandmother to come home from the hospital.

"That is great. That's better than asking for some toy or something," Trump said.

More from Aol.com:
From Kim Jong Un to Melania Trump to Fiona the hippo -- here are the biggest winners of 2017
Melania Trump's most noteworthy moments of 2017
Donald Trump Jr., Ted Cruz appear to mock Obama with cookie